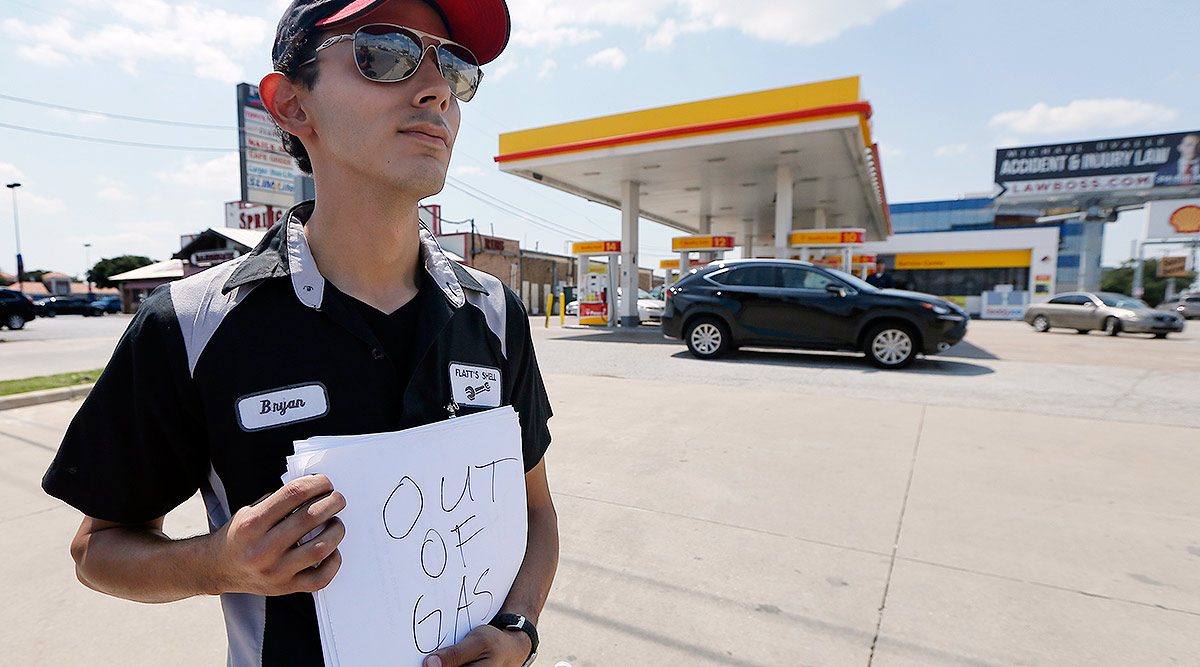 DALLAS — Drivers lined up at gas pumps in parts of Texas Aug. 31 as more stations ran out of gas and prices rose steeply in response to Hurricane Harvey’s impact on Gulf Coast refineries.

At least two major pipelines — one that ships gasoline across the southern United States and up to New York, and another that flows north to Chicago — have been slowed or stopped because of flooding and damage. Officials hoped to resume normal flow by Sept. 3, but meanwhile, the threat of shortages had people running to top off their tanks, even if their gauges weren’t on empty.

At a Shell Station at Interstate 635 in Dallas, manager Tim Flatt had an employee wave away motorists with a paper “Out of Gas” sign after they twice went dry on Aug. 31. They got a refill at about 10 a.m. and were drained again by 2 p.m.

Prices rose with the demand: One Chevron station in downtown Dallas that sold regular gas for $2.29 a gallon just before the storm was charging $2.99 on Aug. 31. Others charged well over $3, and one downtown Shell station charged $3.97 for a regular gallon of gas. At three gas stations in north Dallas, yellow bags or caution tape were wrapped around pumps just after noon.

The crunch prompted QuikTrip, one of the nation’s largest convenience store chains, to temporarily halt gasoline sales at about half its 135 stores in the Dallas-Fort Worth area. Instead, gasoline deliveries are going to designated stores across all parts of the metro area, QuikTrip spokesman Mike Thornbrugh said.

People got so worried about a possible #GasShortage that they created a gas shortage. This is not our finest moment Dallas pic.twitter.com/B7R6dCURiX — Meghan Shanley (@megpat) September 1, 2017

But supply isn’t the problem, Texas’ oil and gas regulator said, even though refiners have been crippled by Harvey. Railroad Commissioner Ryan Sitton said Texas has a supply of more than 230 million barrels of gasoline, and drivers should simply wait three or four days to fill up if they can.

“We have enough gasoline, that’s not the issue,” Sitton said. “There is a challenge of logistics, getting that gasoline from where it is stored to the gas stations, and that is a real challenge and the people are working through that. But that challenge has been surpassed by a run on gas stations.”

The Texas attorney general’s office said anyone seeing gas prices of $4 or higher should take pictures and report the stations as price-gouging. A spokeswoman for the office said as of the afternoon of Aug. 31 there have been 202 complaints of price-gouging at service stations around Texas since Harvey began.

Nationwide, pump prices have surged — the average for a gallon of regular gasoline rose from about $2.35 a week ago to $2.45 now, the American Automobile Association reported. The price spike is more dramatic in Texas, but that didn’t keep motorists from lining up.

In Dallas, one 7-11 had 11 cars waiting. At the “Happy’s Market” Chevron, the queue stretched for a block and a half, and an Interstate 75 off-ramp was jammed with cars waiting at a Shell station. And while a dozen people lined up hoping to get gas from the single available pump at a Valero station, a driver filled a 50-gallon container in the back of his pickup.

If people start hoarding gas, “that’s going to make the problem worse, and prices shoot higher and the event will last longer, with more disruption and shortages,” said Patrick DeHaan, an analyst with GasBuddy.com.

His advice: “Try to have a sense of calm.”

Huge challenges remain for the nation’s system of getting gasoline to the pumps.

Hurricane Harvey forced the shutdown of at least eight Texas refineries, according to AAA.

The Colonial Pipeline provides nearly 40% of the South’s gasoline. It runs underground and is now under water in many parts of Texas, where inspections are needed before it can be fully operational again, Colonial spokesman Steve Baker said Aug. 31. The Georgia-based company remains able to operate its pipeline from Louisiana to states east and northeast of there, though deliveries will be “intermittent,” the company said.

The Explorer Pipeline carries about 660,000 barrels per day through Texas, Oklahoma and points north. A spokesman did not immediately return a phone request for comment Aug. 31, but earlier in the week, while the pipeline suspended flows to Chicago, flow in the company’s smaller pipeline, to Dallas, had been restored to Dallas, analyst Andy Lipow said.

Jeff Martin reported from Atlanta and Claudia Lauer from Dallas. Associated Press writer Will Weissert contributed to this report from Austin, Texas.