Harvey Impedes Nearly 10% of US Trucking, Almost 100% on Gulf Coast 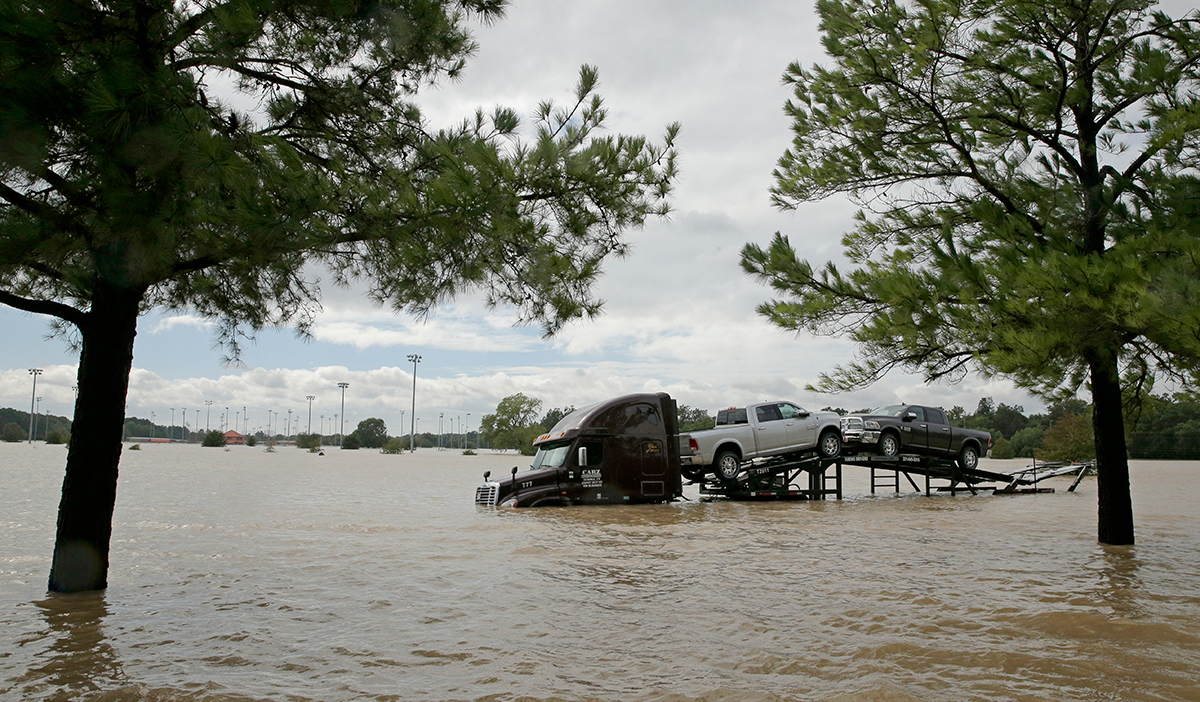 Hurricane Harvey ravaged Texas and Louisiana before losing strength, but the storm’s effect on U.S. trucking operations is still gaining.

Consulting firm FTR assessed the impact in the overall trucking market and concluded the storm will strongly affect more than 7% of the nation’s trucking. Some portion of that, FTR said, will be out of operation for two weeks.

“During the first week, almost 10% of all U.S. trucking will be affected,” FTR reported on Aug. 28, adding that number jumps to near 100% for the Gulf Coast region.

After a month, the numbers will fall but are still significant — impacting nearly 2% nationally and 25% regionally, the consulting firm said.

Harvey came ashore Aug. 25 and for the next five days dropped a record 52 inches of rain on Houston, submerging the city, before drifting to the coast of Louisiana. Roads became impassable and many oil refineries were shuttered.

FTR said “disruptions” include: idle trucks waiting for water to recede from roads and loading docks; extra shipments of relief and construction supplies; extra shipments and lower productivity due to out-of-cycle supply chain demands; and slow operations due to congestion.

Noel Perry, of FTR and the chief economist of online load board Truckstop.com, said to look for spot prices to jump over the next several weeks.

Mark Montague at load board provider DAT Solutions sees spot prices up but was cautious to address reports that show some loads going for $4,000 to $6,000 on routes into Corpus Christi, Texas.

“Those rates are in excess of 250% of the normal rate and they reflect the type of conditions that truckers are operating over. When you haul a load for FEMA, or these relief [groups], you are not assured of getting loaded on a timely basis,” he said, adding there is a certain amount of concern “you probably won’t get a load out.”

Spot pricing was already up strong, in double-digit territory. Market participants could easily add 5 percentage points to those numbers [in Harvey's wake].

Tom Kretsinger Jr., chairman of American Central Transport Inc. of Kansas City, has seen business affected but said things are still getting sorted out. He expects trucking will ultimately “hit capacity” in an already tight market. Trucks will soon be “needed for everything for the house — insulation, carpets, appliances.”

His company operates 325 dry vans. He said things in Houston are just getting sorted out so it’s too early to tell whether business will be hurt.

“We’ve lost quite a bit, in the millions of dollars in revenue,” McDuffie said. “One of our largest operations is in Houston.”

Dunavant has “upwards of hundreds of square feet of warehousing space” at its Houston operation, where hundreds of employees and contractors work.

But after being down nearly five days, Dunavant got good news on Aug. 30: “We have two trucking drayage terminals — one in La Porte, one in Houston — and both are in great shape. They’re high and dry with no flooding and no damage. We’re very excited about that and all of our equipment [is fine]. No terminals are damaged whatsoever and we’re actually operating today.”

Shuttered Port of Houston has suffered financially, too.

Will Connell, president of Gulf Intermodal Services in La Porte, operates about 120 trucks “that probably half run local, half run regional freight” to places like Dallas, San Antonio and Laredo. But because several of his employees have had their homes or neighborhoods flooded, they can’t get to work.

As for rails, Burlington Northern Santa Fe and Union Pacific run there. “They operate local terminals and are not operating or discharging or receiving containers, similar to the Port of Houston,” he said.

Kansas City Southern Railroad announced it had shut down parts of its line between Houston and Laredo on Aug. 25 as Harvey approached.

“That’s a blow to the railroad, whose link between the U.S. track and its Mexican railway run along the Gulf Coast of Texas. The line is a major corridor for automobiles and appliances manufactured in Mexico for U.S. markets,” it said.