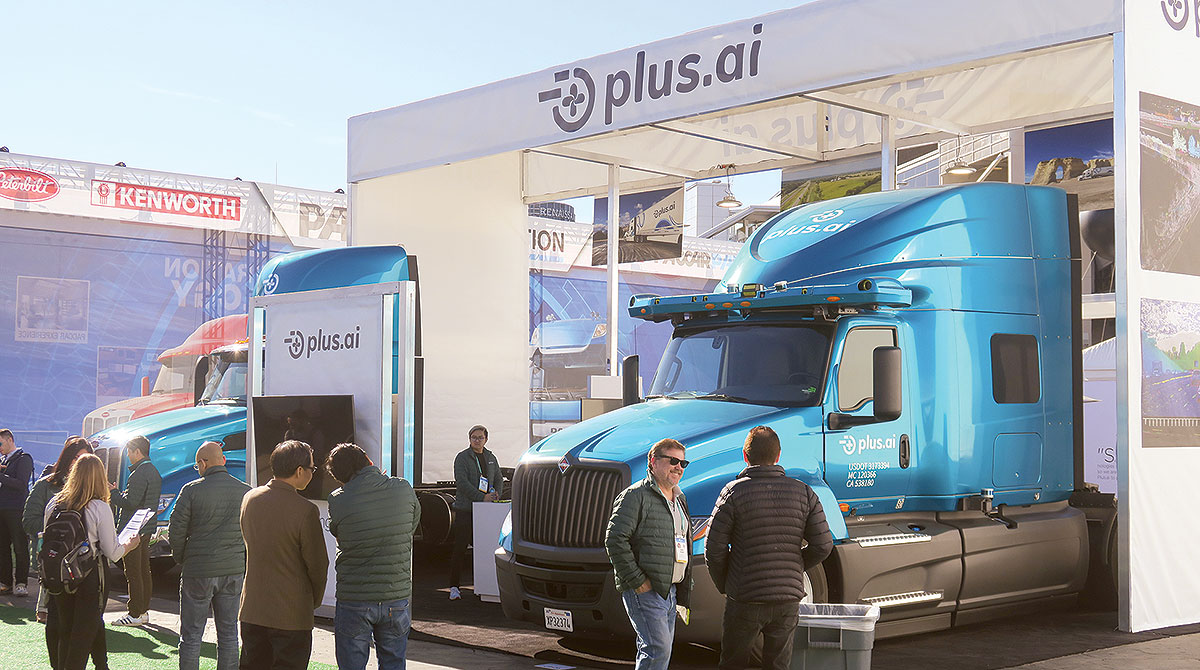 Original equipment manufacturers, component suppliers and technology startups showcased self-driving truck prototypes and highlighted their investments in this emerging field during the massive technology show while offering a range of views on how automated trucking might take shape in the years ahead.

Truck maker Paccar Inc. and technology startup Plus.ai exhibited heavy-duty trucks outfitted with sensors and software designed to eventually enable Level 4 automated driving, meaning the vehicle would be able to operate autonomously in certain conditions without relying on a driver as a fallback.

Although CES has been a prominent venue for self-driving passenger car technology in recent years, some developers see commercial vehicles as a better application for highly automated driving. 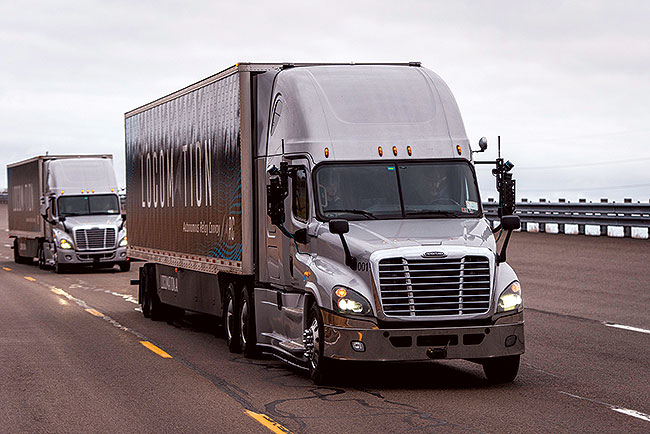 Locomation is planning several fleet trials of its automated platooning system in 2020. (Locomation)

“At ZF, we believe that systems for Level 4 or fully automated driving and upwards right now only make sense for commercial vehicles and people movers,” Wolf-Henning Scheider, the company’s CEO, said at a Jan. 6 press conference ahead of the show.

For passenger cars, the component and technology supplier will focus on Level 2 systems where the driver is always in the loop, Scheider said, adding that ZF sees no viable business case today for individual ownership of highly automated cars due to the cost of the necessary technology.

In commercial transportation, however, there are realistic business cases that could provide a return on investment for Level 4 systems, he said.

Scheider pointed to industrial areas such as company terminals, logistics centers and harbors as ideal places to deploy highly automated commercial trucks in the near term.

“First we have to start with systems that only run on premises, which would already reduce the number of hours that drivers are needed significantly,” he said.

For on-road operations, Scheider said highly automated trucks will continue to have safety drivers on board for the time being, given the open questions that remain about the legal framework and how the vehicle will interact with authorities.

“Very simple question: How does a police car stop a fully autonomous truck?” he asked. “But we are working on it.”

While technology developers increasingly regard the trucking industry as a promising application for autonomous vehicles, that doesn’t mean professional truck drivers will be any less essential in the future, said Stephan Olsen, general manager of the Paccar Innovation Center.

Paccar, the parent of Kenworth Truck Co. and Peterbilt Motors Co., presented a Kenworth T680 tractor equipped with a prototype Level 4 system at its CES exhibit.

“We think it has the possibility of getting drivers more home time, as well as attracting new drivers to the industry,” he said.

The Road to Full Autonomy

Plus.ai, on the other hand, is one of several technology startups focused on developing Level 4 trucks that ultimately would be able to travel between distribution centers in hub-to-hub operations with no driver onboard. 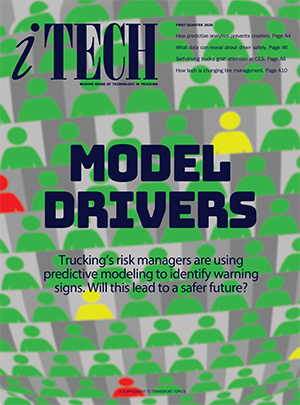 For now, though, the company’s test trucks always have a safety driver behind the wheel as well as an operations specialist on board during testing on public roads.

The Cupertino, Calif.-based startup, which brought International and Peterbilt tractors equipped with its technology to CES, announced plans to expand its testing to every continental U.S. state this year.

By running its automated trucks in a variety of different geographies and conditions, Plus.ai aims to ensure that its system can handle driving conditions on highways throughout the country, said Shawn Kerrigan, the company’s co-founder and chief operating officer.

Plus.ai currently is operating about a dozen test trucks in the United States and another dozen in China. Late last year, one of those trucks hauled 40,000 pounds of butter for Land O’Lakes on a 2,800-mile, cross-country run from Tulare, Calif., to Quakertown, Pa., in less than three days.

Kerrigan declined to offer a time frame for the commercialization of Plus.ai’s automated driving technology, but said the timing will depend not only on the company’s Level 4 sensors and software, but also on the availability of a vehicle platform with safety critical components such as redundant steering and braking systems, as well as a regulatory framework for deployment.

“There are a number of pieces that all need to come together,” Kerrigan said.

Other startups that are testing and developing autonomous truck technology include TuSimple, Embark, Ike, Kodiak Robotics and Starsky Robotics.

Self-driving technology also could be deployed in conjunction with platooning systems that wirelessly connect two or more trucks, enabling them to travel in tight convoys on the highway.

Pittsburgh-based startup Locomation, for example, is testing and developing a two-truck platooning system where the following truck could drive itself with no input.

With the platooning system engaged, the driver in the follower truck would be able to step away from the wheel and even go off duty in the sleeper berth as the vehicle automatically follows the lead truck, which would continue to be piloted by a driver.

Co-founder and CEO Çetin Meriçli, who attended CES with one of Locomation’s seed round investors, Plug and Play, described his company’s automated platooning system as a “minimum viable product” for autonomous trucking that can help pave the way for broader application of the technology in the future.

“We don’t have to boil the ocean from the get-go,” he said. “At Locomation, we believe there are pockets of opportunity that are large enough and tangible enough that you can solve a flavor of the problem, turn it into a flavor of a product and become a sustainable business.”

Locomation plans to conduct platooning trials with four or five fleets in 2020, with the first scheduled to begin early in the second quarter, Meriçli said.

The trucks will have safety drivers behind the wheel and test engineers in the cab during those pilots, he said, but added that the company aims to reach the point where it can demonstrate an autonomous fol­lower truck by the end of 2020 or in early 2021.

Looking at the broader technology landscape, Meriçli also noted “how much sobering up is happening around autonomous driving in general.”

That was bound to happen, he said, given the level of hype about the technology in recent years, but also suggested that some observers may now be “overcorrecting a little bit.”

Even as developers make technical progress, the timing of deployment will depend on peripheral factors such as quantifying safety performance for insurance providers and gaining the acceptance of government regulators and the motoring public, he said.

The pace of adoption for auto­mated trucks may vary from one region to the next.

ZF’s Scheider said on-road Level 4 commercial vehicles will probably reach the market first in the United States and China, where he said conditions are most favorable for the technology. The United States has the advantage of less crowded highways in some parts of the country, for example.

“Within this development contract, we will be adjusting the ZF ProAI RoboThink to the specific needs of our customer, and thus provide a tailored central computer enabling a Level 4 solution for trucks to drive fully automated,” he said. “Subject to the outcome of this development, the technology could be starting production in the 2024-25 time frame.”

In the years ahead, the trucking industry will likely implement various forms of automated driving tech­nology in various business models. Rich Mohr, chief technology officer for ­Ryder Fleet Management Solutions, predicted that the industry will utilize a combination of advanced driver-­assistance systems and highly auto­mated vehicles, and the right technology will depend on the specific-use case.

“You’re going to see multiple options available for different applications, and all of them are going to revolve around cost savings and driver safety,” said Mohr, one of several technology experts from Ryder System who attended CES to discuss emerging technology trends in commercial transportation.

Mohr said the industry’s move toward automation is beginning to yield benefits today.

The driver-assist technology that is available on modern trucks already has improved safety for truck drivers, as well as other motorists that don’t always drive safely around commercial vehicles, he said.

New Car Ratings Include How They Make Drivers Stay Alert