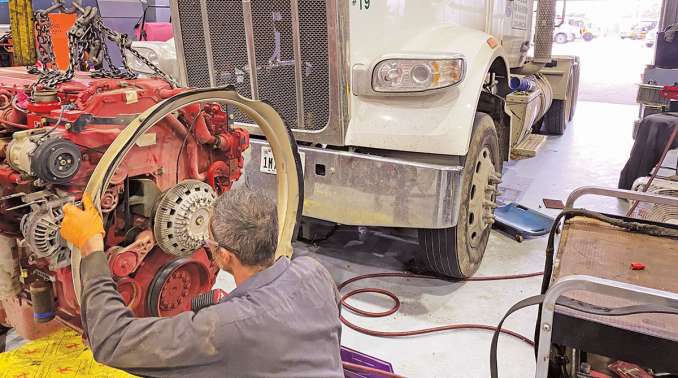 SAN ANTONIO — As truck technologies and emissions systems continue to evolve and electric-powered trucks begin to hit the market, the knowledge and expertise required to service and maintain these vehicles is also shifting.

Justin Euler, a technician based in St. Peters, Mo., competed in the medium-duty vehicle category. He has participated in the competition every year since 2014. That includes winning the title of all-around grand champion in 2017 and 2019. 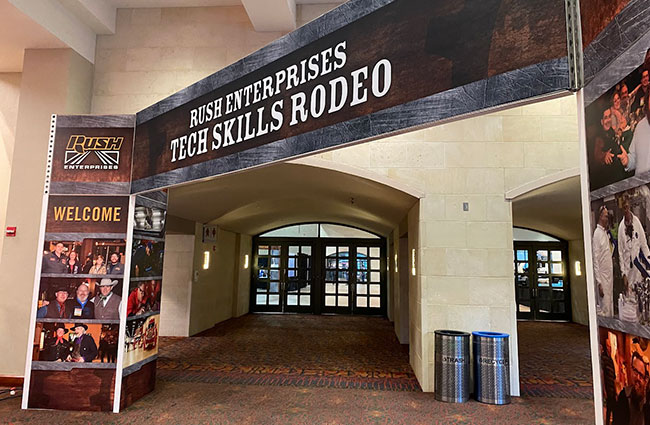 Rush Enterprises' Tech Skills Rodeo returned as an in-person event after two years as a virtual competition because of the pandemic. (Connor D. Wolf/Transport Topics)

“Unfortunately, we just can’t keep up with the emissions and the greenhouse gases with the diesel engine,” Euler said. “I definitely think we’re moving toward the electric phase and the autonomous phase and the natural gas phase or the hydrogen phase.”

Jason Swann, a technician based in Dallas, echoed the point that keeping up with technology is one of the biggest challenges technicians are facing. He competes in the heavy-duty category and has attended every competition since it launched in 2006. He has also been an all-around grand champion two times, with his latest win occurring in 2018.

“It’s really just trying to keep up with the technology,” Swann said. “Everything is changing. It seems like the manufacturers have to one-up themselves every year or they’re not in it. So, we’re constantly having to learn about the new [electronic control unit] they put on it or they’ve completely done away with this, changed it and put it all over here. It’s a mess.”

Swann expressed concern over training for the new technologies, having electric vehicle chargers and having the proper tools. He also pointed out trucks are becoming harder to work on because they are lower to the ground to be more aerodynamic.

Jon Steckman, a technician from Columbus, Ohio, competes in the heavy-duty service category and was named one of the all-around reserve champions in 2019. He believes training new technicians so that they properly retain the information is a bigger problem than the evolving technology.

“I personally like the technology,” Steckman said. “Having more things to break is always a good thing as a technician. There’s definitely some hurdles with the new training coming out. I wish the manufacturers would come out with better training on some of the newer technology sooner.”

Steckman has seen training overall get a lot better since he went to technical school in 2000. He noted there are more hands-on opportunities. But despite that he has concerns that people being trained now are having more difficulty retaining the information.

“You get what you put into it,” Steckman said. “I don’t really know what we could do to improve those guys absorbing some of that. It’s how much they want to put into it and get out of it as well.”

“It depends on how fast the industry brings it on,” Euler said. “If it’s just like a one-year deal or a two-year deal where bang, you fade out the diesel and then two years you’re already full electric or you’re hydrogen, I think it’s going to be hard for a technician to keep up. If you make it slowly transition over like a four- or five-year period, I think the technicians will be able to keep up.”

Euler also pointed out that a slower rollout means it will be possible to catch failure points before they become too widespread. Swann noted that manufacturers have been able to keep up with getting training and information out on the new technologies.

“They’re doing their best to get the training out and the information that we have available to us,” Swann said. “So long as whoever the manufacturer or supplier is gets their information to us and provides support, we’re usually OK.”

Guide To Raising Labor Rates In A Heavy-Duty Repair Shop