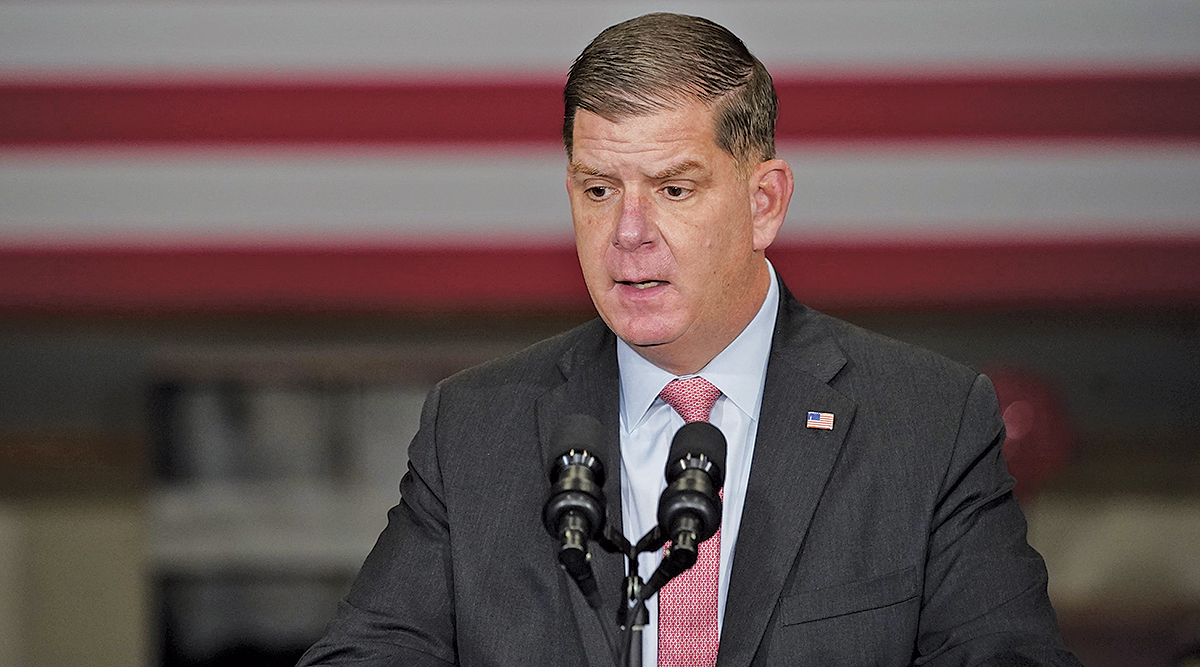 “We’re focused on the supply chain itself right now, and finding all those bottlenecks — whether it’s the ports, the empty containers or the warehouses,” Walsh told Transport Topics during an exclusive March 29 interview. “The one thing, or concern, that I’ve not heard a complaint about in the supply chain is the workers. No one has complained about the quality of the work by the truck drivers or the longshoremen.”

Walsh made the comments while attending a ceremony here where less-than-truckload carrier Yellow opened its 17th driver training academy.

Negotiations are expected to begin in April between the Pacific Maritime Association and International Longshore & Warehouse Union workers, who unload thousands of cargo containers each day at West Coast ports.

Walsh told TT he is “not concerned about the negotiations at this time,” and expressed optimism that the two sides will reach a new, potentially seven-year master contract for the 29 PMA locations, covering more than 15,000 port and office workers. Those affected by the contract work at some of the nation’s busiest water and inland container ports, including Los Angeles, Long Beach, Calif., Oakland, Calif., Portland, Ore., and Seattle/Tacoma, as well as other waterfront locations along the Pacific Coast.

“I believe they’ll start negotiations in the next four weeks,” he said. “I think a lot of people are concerned about something they don’t have to be concerned about. Every negotiation has its own uniqueness about it, but in my talking with the ILWU and the shipping companies they seem focused on this contract.” 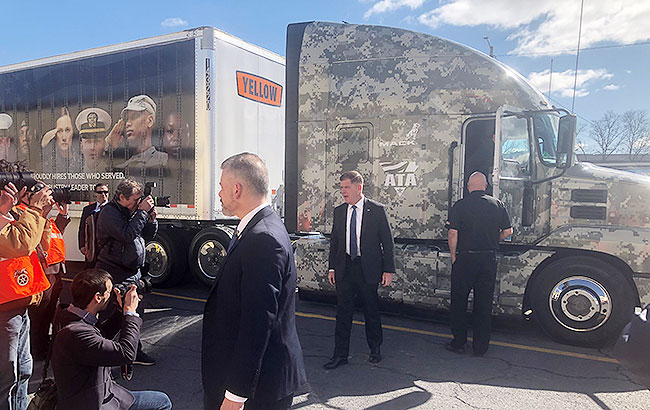 Walsh at the Yellow event in Carlisle. (Dan Ronan/Transport Topics)

In November, PMA requested a one-year contract extension amid supply chain challenges, but ILWU rejected the offer and confirmed it wanted to open negotiations on a new contract in spring 2022.

Throughout the pandemic, port leaders have regularly praised ILWU workers for staying on the job, especially during the early days and before vaccines were developed. The union said more than 1,700 dockworkers fell ill during the pandemic. As of last summer, two had died.

With container volumes remaining strong, industry experts and shippers will watch the negotiations closely. Union and management representatives have reassured port leaders, shippers and retailers that discussions will stay focused on the key economic and workplace issues.

Overseas shipping rates have soared. Maersk, the world’s second-largest shipping company, on Feb. 9 said 2021 was a record year buoyed by “exceptional market conditions which led to record-high growth and profitability.”

Maersk ranks No. 4 on the Transport Topics Top 50 list of the largest global freight carriers.

In a Feb. 24 letter, the National Retail Federation urged both sides to begin contract negotiations well before the June 30 deadline to help ensure continued cargo movement.

“We know key issues for both parties need to be worked out during this contract negotiation and believe the parties should sit down now and not wait to begin negotiations,” NRF President Matthew Shay wrote.

The NRF in the letter noted that some members are developing contingency plans should an agreement not be reached by the deadline.

“Any kind of additional disruptions at the ports would add further costly delays to our members’ supply chains and likely add to inflation concerns and further threaten the economic recovery,” Shay wrote.

Walsh said both labor and management realize these will be difficult talks, but ultimately he believes the two sides will reach an agreement.

“I think everyone is aware of the situation we are in today,” Walsh said. “I’m willing to step in, if I need too — I told all sides I’d step in if they need me. But these are very seasoned negotiations on both sides. I’m not concerned.”