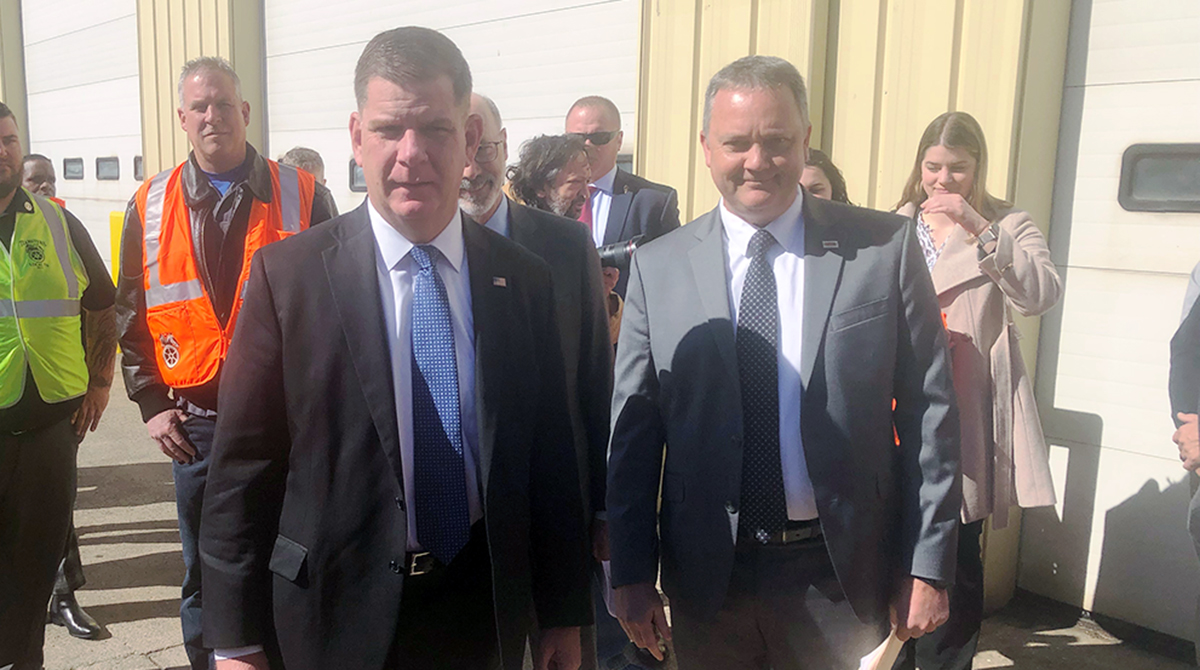 Walsh (left) with Hawkins outside the venue for the event. (Dan Ronan/Transport Topics)

CARLISLE, Pa. — Executives from Yellow Corp. were joined by Labor Secretary Marty Walsh and Pennsylvania Gov. Tom Wolf at a March 29 ribbon-cutting for the motor carrier’s 17th driving academy, a date that also marked the end of the Biden administration’s 90-day challenge to trucking companies to ramp up training and apprenticeship programs to bring drivers to the industry.

“The next generation of professional truck drivers are going to be trained right here in Carlisle,” Yellow CEO Darren Hawkins said. “This would not be possible without our partnership with the apprenticeship program through the U.S. Department of Labor. The administration’s trucking action plan widely identified apprenticeship programs as a critical component of addressing the constraints with our nation’s supply chain capacity.”

Yellow pledged to hire and train at least 1,000 new drivers by the end of this year. The Middlesex Township operation is set to begin training drivers the week of April 4.

Many other companies are signed up or interested in the federal apprenticeship program, Walsh told Transport Topics from the event.

“We have 99 employers that have signed up, and we have another couple hundred in the pipeline. We want to expose people to the industry,” he said. “When you have a good opportunity for a good middle class, good paying job and exposing people to that, we can change that. We’re not going to solve an 80,000 driver crisis overnight, but over a couple of years, we can put a big dent in that.”

Walsh said at least 700 trucking companies have inquired about setting up their own apprenticeship program.

Wolf said both private sector and government leaders are making progress in convincing people to look at the trucking and logistics industries as long-term employers, especially as more companies are raising driver pay, providing signing bonuses, improving benefits and paying for driver training.

“The investments we’re making in apprenticeships and other forms of hands-on and on-the-job training are already helping us get more Pennsylvanians into careers where they can succeed,” Wolf said.

“We have come a long way in trucking. It’s really important what you do and I want to make sure we do everything in Pennsylvania to support you.”

Wolf said Yellow’s first driving academy in Pennsylvania will bolster the climate in a state that in 2020 was ranked by the Labor Department as fourth in the country for trucking jobs, with 81,000 people working in the industry.

Drivers, technicians and other staff from Yellow were on hand for the event. Walsh arrived in a camouflage-wrapped ATA truck driven by America’s Road Team Captain and Yellow driver Steve Fields, who has been a professional driver for 37 years and has more than 3.5 million safe miles on the road. America’s Road Team is an ATA program that promotes the trucking industry.

Got a ride with Steve Fields, a truck driver who has been on the road for 35 years, on the way to the Yellow Driving Academy’s apprenticeship program ribbon cutting this morning.

Yellow Chief Operating Officer Darrel Harris said he believes there are potentially many more drivers out there like Fields, and training programs can develop them.

“As I look around here at our driving academy, I think about all of the people who will enter seeking a new opportunity to provide for their families,” Harris said. “This is the gateway to a lifetime career with a good income and full family benefits. It’s all right here.”

Driver Ester Parsons of Lancaster, Pa., joined Yellow four years ago, and was chosen to introduce Walsh at the event. Harris pointed to Parsons as the type of success story that can be replicated with the new driving academy. 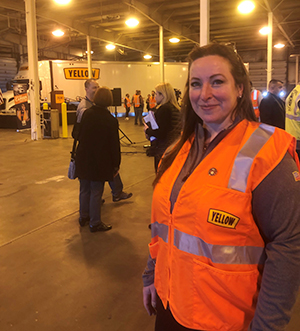 “Ester chose to pursue a driving career, and the company she landed at was Yellow,” he said. “Yellow moved her into the middle class so she could provide for her family.”

When Parsons joined Yellow, she was a single mom with two high school-aged children looking to go to college. Parsons enrolled at a community college, obtained her CDL and was hired by Yellow. She drives for the company in the Northeast and Mid-Atlantic region.

“The income I was making in a clerical job was not going to sustain us throughout their college tenure,” she said of her children, who now are college students. “It was sink or swim. I knew it was going to be an industry where I could earn good money and take care of my family.” She added, “Anything is possible, so long as you’re willing to take a chance on yourself.”