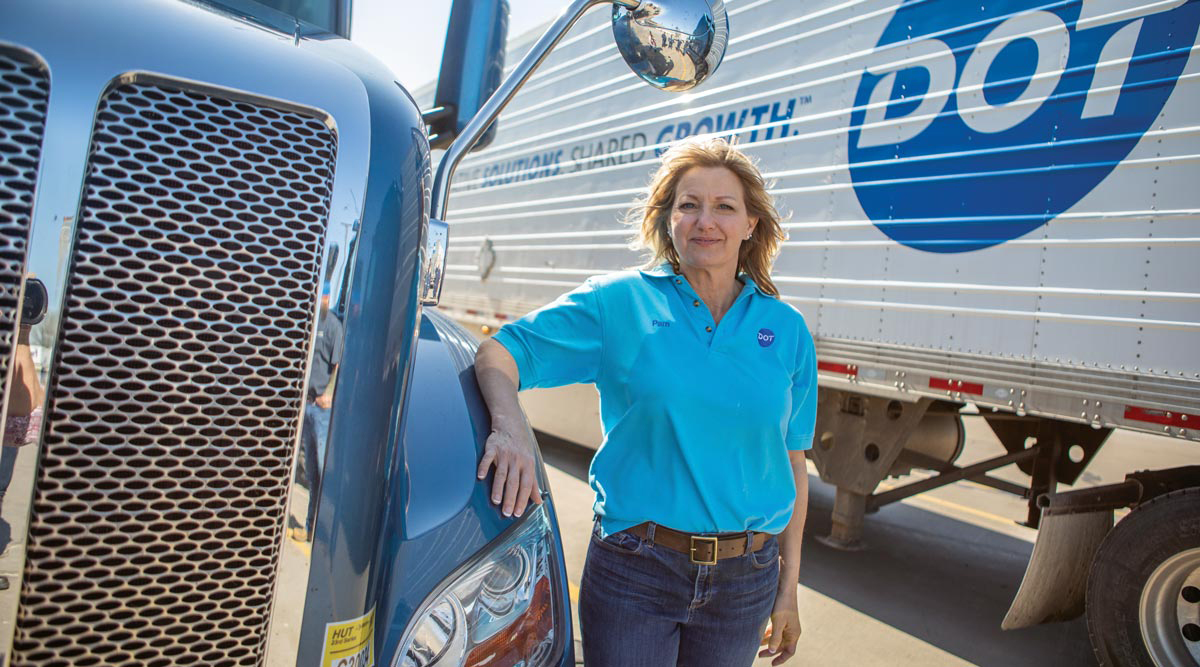 In light of the many supply chain disruptions and market shifts of the past few years, shippers have been working to improve the efficiency and reliability of their private fleet operations, starting with an even sharper focus on attracting and retaining professional drivers.

As always, success for any trucking operation begins with the person behind the steering wheel. And that maxim has never been truer than in the years since the outbreak of COVID-19 with widespread labor shortages across much of the economy.

Private fleets, much the same as for-hire trucking companies, redoubled their efforts to boost driver satisfaction and gain an advantage in the trucking industry’s highly competitive labor market.

Some of those initiatives are now producing results.

“We threw everything we could resource-­wise at driver applications last year, and in the first quarter we started seeing dividends for the stuff we did last year,” said Bryan Langston, president of Dot Transportation, the trucking subsidiary of food service redistributor Dot Foods.

Langston attributed the company’s improved hiring results and lower turnover rate to its multipronged approach to bolstering its workforce.

Last summer, Dot Transportation began establishing its own in-house commercial driver license training schools, starting with its Maryland facility. The company has since opened driver schools and training programs at several other locations.

“It was an absolute game changer for us,” Langston said.

Dot Transportation also partnered with Tenstreet, a driver recruiting software provider, and has been “much more intentional” in its focus on hiring female drivers, he added.

While the company’s driver turnover rate still has not dropped back down to pre-­pandemic levels, it is significantly lower than where it stood in 2021, Langston said.

“We are way ahead of our driver plan at this point and looking to take on ­additional revenue streams because of the position that we are in,” he said.

Although the trucking industry has long struggled to attract professional drivers — a problem that only worsened during the pandemic — Langston is bullish on the future of the truck driving career.

“I’m optimistic that with the right approach and the right culture, we can educate people on how good of a job the driving job is,” he said.

He said carriers will need to be flexible and offer what he called a “buffet of driver jobs” to satisfy a range of driver preferences, from those who want to maximize pay in an over-the-road job to those who prefer a day job that allows them to return home at night.

“There’s a spectrum there, and we’ve got to understand that spectrum,” he said. “If we put the right resources to it, I actually think we can change the way the driver job has historically been trending down.”

Dot Foods, based in Mount Sterling, Ill., ranks No. 16 on the Transport Topics Top 100 list of the largest private carriers in North America.

Meanwhile, shippers continue to grapple with global supply chain disruptions, which have become the norm since the onset of the pandemic 2½ years ago.

“The first quarter was one of the most challenging periods yet re­lated to supply chain disruptions, increased costs and persistently high inflation,” CFO Brett Biggs said on the call.

He went on to cite Russia’s war in Ukraine and ongoing disruptions related to the pandemic in various parts of the world, including China.

Walmart, based in Bentonville, Ark., ranks No. 2 on the TT100 list of private carriers.

Some of the supply chain constraints have had a more direct effect on fleet operations.

Shortages of semiconductor chips and other key components have hindered production at truck and trailer manufacturers, which in some cases has limited the amount of new equipment private carriers have been able to bring into their fleets.

Growing in a Volatile Market

Despite the tough competition for drivers and the longer wait times for new trucks, many of the largest private carriers in North America still have managed to grow their fleets.

Online car retailer Carvana, for example, has quickly expanded its own private fleet in recent years to transport vehicles across the country and ultimately deliver them to buyers. 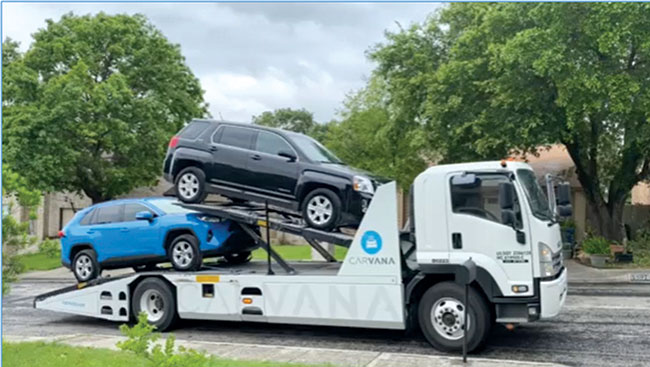 Online retailer Carvana uses its private fleet of Class 8 tractor-trailers and Class 6 straight trucks to transport cars across the country and ultimately deliver them to customers' driveways. (Carvana)


The company has 1,262 Class 8 tractors and 2,204 Class 6 straight trucks in its car-hauling operations, with hundreds more of both vehicle types on order to be delivered later this year, said Kenny Stimson, Carvana’s head of equipment purchasing and fleet management.

“We’ve quickly become a logistics operating company within a car sales company,” said Stimson, who has been overseeing Carvana’s expanding logistics operation since joining the company four years ago.

Prior to that, he worked at Swift Transportation and was part of the team that blended its maintenance operations with Knight Transportation when those companies merged to become Knight-Swift.

While building up its fleet operations, Carvana designed its logistics network around driver home time.

The company’s nine-car haulers move vehicles between cities such as Phoenix and Albuquerque, N.M., but its drivers don’t travel all the way to the destination. Instead, they run halfway and back through a relay system. 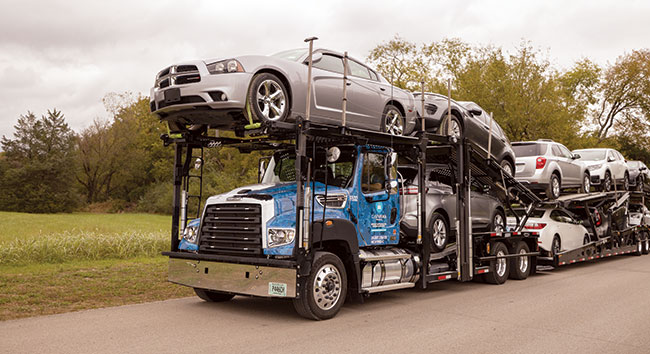 Carvana uses a relay system to ensure its drivers can return home at the end of each shift. (Carvana)

For instance, a driver leaving Phoenix and a driver leaving Albuquerque depart at roughly the same time and meet at a midway point between the cities, where they exchange their keys, swap trucks and drive home in the ­other vehicle. Both trucks reach their destination cities while both drivers return home at the end of an eight- or 10-hour day.

“We’re 100% able to allow our drivers to come home every night,” Stimson said. “We have no sleeper cabs whatsoever.”

This relay system also enables a truck to run more continuously across the country and speeds up deliveries, similar to a team-driving scenario.

“Our trucks average about 180,000 miles a year, which is very comparable to a team driver, but every driver is home at night,” Stimson said.

After a Carvana tractor-trailer brings a car to its destination city, a Class 6 single-vehicle hauler then delivers that car to the customer’s driveway.

Carvana also operates a network of car vending machines that serve as pickup locations for online car buyers who prefer to receive their newly purchased vehicles that way.

To support its fleet, Carvana also has built a maintenance operation that combines its own in-house maintenance department with third-party services provided by Cox Automotive.

Building up and maintaining a strong workforce usually doesn’t come down to a single factor.

Instead, private carriers have been working to improve driver recruitment and retention through a combination of pay increases, lifestyle considerations and opportunities for mentorship and career advancement.

In one high-profile announcement, Walmart in April introduced pay raises that it said could enable drivers to make up to $110,000 in their first year with the company. Walmart also launched a 12-week training program for workers to earn their commercial driver license and join its private fleet.

Other large private carriers also have taken steps to make their jobs attractive in a market where drivers have many options.

Frito-Lay, a division of PepsiCo Inc., has focused on compensation, benefits and work-life balance to keep its driver turnover rate under 20%.

Frito-Lay focuses on both pay and work-life balance to maintain its low driver turnover rate. (Frito-Lay)

The private fleet operator said 90% of its trips are completed within the same day so drivers can return home after their shift.

Frito-Lay also cited driver pay and sign-on bonuses, along with health insurance packages that begin on the first day of employment, as well as mental health benefits.

“The COVID-19 pandemic created a shift in recruitment strategy within the trucking industry,” said Laura Maxwell, senior vice president of supply chain at PepsiCo Foods North America. “Whereas decades ago we relied primarily on external hires, we have now leveraged internal promotion for growth as well as experienced growth through apprenticeship programs.”

She cited Frito-Lay’s partnership with the Department of Trans­portation and the Department of Labor during the White House’s 90-day challenge to develop registered apprenticeship programs as part of the administration’s Trucking Action Plan, introduced in December 2021.

Beyond that, Frito-Lay is focusing on helping drivers grow their careers within the company.

“Mentorship is something that is important to maintain throughout a career, so as our seasoned drivers evolve, we offer opportunities for them to facilitate safety trainings,” Maxwell said. “Education is of particular appeal to the next generation of drivers, and we have placed it at the forefront of our employee development strategy, where we offer scholarship opportunities, education assistance for degree and vocational programs, as well as assistance for parents of college-bound children.”

Meanwhile, private carriers also have been among the first to invest in emerging commercial vehicle technologies such as electric-­powered trucks.

In recent years, many large shippers have publicly outlined bold plans to reduce emissions. As they work toward those environmental sustainability targets, these companies typically view their freight transportation operations as a key opportunity to reduce their carbon footprint. 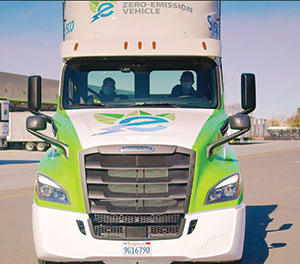 Sysco is adding battery-electric tractors to its fleet. (Sysco via YouTube)

“Sysco is committed to making meaningful investments to support achievement of our climate goals, including those that encourage the development of electric tractors and trailers,” Marie Robinson, Sysco’s executive vice president and chief supply chain officer, said in the May announcement.

The private fleet operator said it aims to electrify 35% of its U.S. fleet by 2030 to help reach its goal of cutting 27.5% of its direct carbon emissions by that year.

Sysco also highlighted its pilot of the eCascadia in its 2021 corporate social responsibility report.

After testing the electric vehicle in real-world freight applications at its Bay Area operating site, Sysco determined that the zero- emission truck could successfully serve most of its regional routes on a single charge.

“The EV performed well in our pilot,” Sysco said in the report. “Our drivers, in particular, enjoyed the EV’s powerful, yet smooth and quiet ride.”

Sysco, based in Houston, ranks No. 3 on the TT100 list of private carriers.

At the same time, shippers con­tinue to seek efficiency gains through technology advances in the warehousing and logistics sectors.

This program, called the Amazon Industrial Innovation Fund, will invest in companies developing technologies that increase the speed of product delivery and improve the experience of warehouse and logistics workers.

“These industries are inherently complex,” Alex Ceballos Encarnacion, Amazon’s vice president of worldwide corporate development, said in the announcement. “With our scale, Amazon is committed to investing in companies that will ignite innovation in emerging technologies that can help improve employee experiences and safety while seamlessly coexisting with workforces across the supply chain, logistics and ­other industries.”