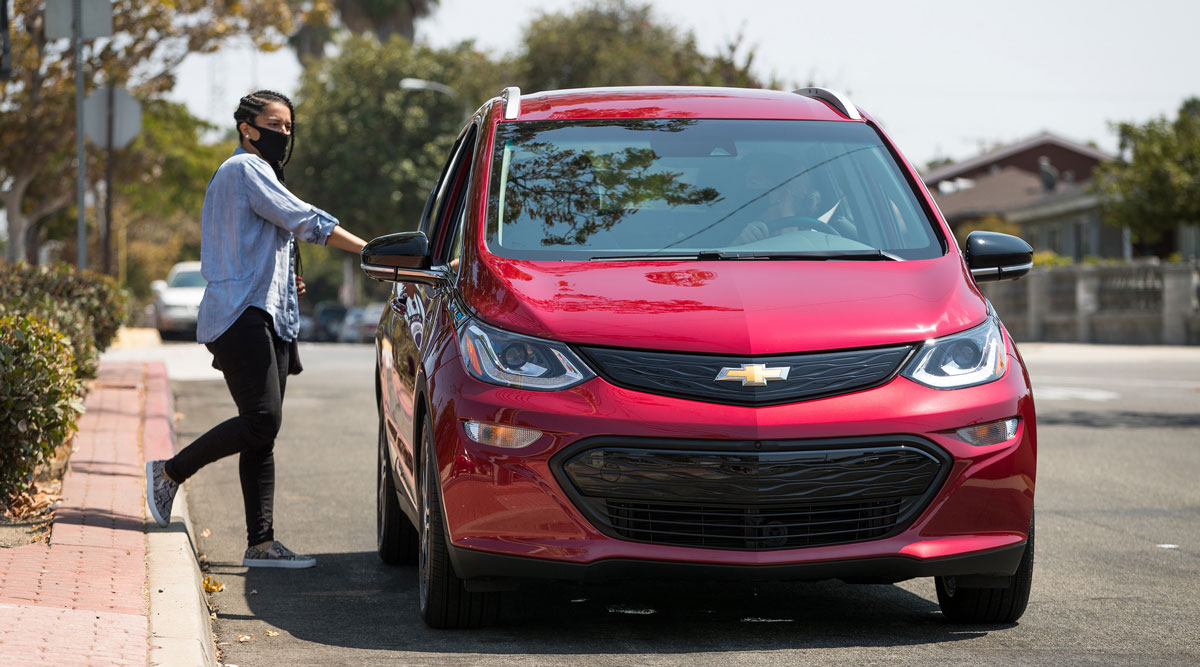 Uber and Lyft have a ways to go to win 50% yes on Proposition 22. (Dan MacMedan for GM)

Despite amassing the largest campaign war chest in California history, Uber, Lyft and other app-based companies are in danger of coming up short with voters on a ballot measure that would allow them to again classify their workers as independent contractors, a new statewide poll shows.

The UC Berkeley Institute of Governmental Studies poll shows that 39% of the 5,900 likely voters surveyed Sept. 9-15 would side with the companies and vote yes on Proposition 22, compared with 36% who said they would vote no and 25% still undecided. The poll’s margin of error is plus or minus two points.

With just over 40 days left before the November election, pollster Mark DiCamillo says Uber, Lyft, Instacart, Postmates and DoorDash — which have collectively put an unprecedented $180 million into their campaign — have a long way to go to earn more than 50% of the vote, a necessary threshold for a ballot measure to pass.

“So, it’s a tall order for the yes side, but with the resources they have and the fact that voters really haven’t come to judgment ... it’s still open,” DiCamillo said. “I think it’s anybody’s guess right now.” 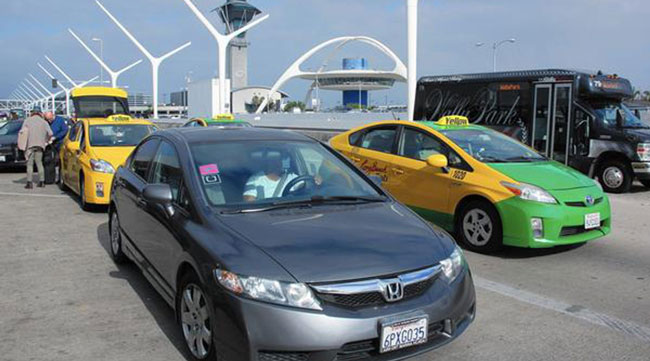 A car with Uber and Lyft stickers is seen at LAX. (Irfan Khan/Los Angeles Times)

Proposition 22 is the app-based companies’ answer to the hotly debated Assembly Bill 5, a 2019 law that requires dozens of industries to classify their workers as employees instead of independent contractors and provide them with job protections. The law sought to clarify a 2018 California Supreme Court ruling that imposed a new test to determine employment status.

Labor unions argue that Uber, Lyft and other companies had been skirting the law and AB 5 was necessary to require the businesses to appropriately classify nearly 500,000 workers in California that state audits found have been improperly treated as independent contractors. AB 5 gives them access to workers’ compensation, family leave, minimum wage, vacation, sick leave and other benefits.

Proposition 22 is an attempt by the app-based companies to buy their way out of the state law and the new poll shows it isn’t working, opponents say.

“After spending record-shattering amounts on TV, radio and every other platform imaginable and available starting in July, I guess more isn’t always better,” said Gale Kaufman, chief consultant for the labor-funded opposition campaign. “When you’ve got the measure they have, a measure that rips basic benefits and protections away from their workers, even they can’t hide that.”

The app-based companies have long argued that AB 5 would upend their business model and tried to convince the California Legislature to carve out an exemption that would have allowed them to continue to treat their workers as independent contractors. But as AB 5 moved through the Legislature and talks with labor unions came to a halt last year, the companies turned their attention to the 2020 ballot.

Ballot measure contests often favor the campaign with the most money to pay for ads on television, streaming services, radio, mail and other media to reach voters.

It’s not unusual in California for companies to launch an initiative as a method of convincing their opponents in the Legislature to give them what they want — or risk having to wage an expensive ballot measure campaign.

Uber, Lyft and DoorDash appeared to use the tactic in August 2019, when they committed $90 million to seek an exemption to AB 5 through the ballot initiative process. At the time, Uber’s chief legal officer Tony West described the ballot initiative as a last resort while the app-based companies continued to pursue legislative relief, which never materialized.

Gov. Gavin Newsom signed AB 5 into law one year ago, saying it “will help reduce worker misclassification — workers being wrongly classified as ‘independent contractors’ rather than employees, which erodes basic worker protections like the minimum wage, paid sick days and health insurance benefits.”

But the state alleged in a May lawsuit that Uber and Lyft have continued to flout the law and treat their drivers as independent contractors. As the court process plays out, Uber and Lyft have threatened to temporarily shut down their operations in California.

Proposition 22 qualified for the November ballot in May and so far Uber, Lyft, DoorDash, Instacart and Postmates are the only companies that have contributed money to the yes campaign, including $70 million on Sept. 4 to bring the total to more than $180 million.

The measure would put in place the exemption to AB 5 that the app-based ride-hailing and delivery companies have been seeking. Provisions in the proposal would also give some limited benefits to qualifying workers, including 120% of the local minimum wage for hours that they are driving, but not those spent waiting for riders or orders, according to an analysis by the independent Legislative Analyst’s Office.

Most workers are part time, but those who work more than 15 hours a week — a total also calculated by hours driving and not including hours between orders or rides — would be eligible for a stipend for health insurance.

The companies argue that their drivers want the flexibility that working as independent contractors provides. They say drivers work for multiple app-based companies at one time and choose their own hours, which they would no longer be allowed to do unless the companies are exempt from AB 5.

“As voters learn more about Prop 22 and the benefits provided to both drivers and customers, we are seeing growing support across the political spectrum,” said Geoff Vetter, a spokesman for the “Yes on 22” campaign. “Prop 22 provides that independence to drivers, along with historic new benefits like a minimum earnings guarantee and health care, and will save hundreds of thousands of ride-share and delivery jobs and the services millions rely on.”

Although app-based companies pushing the measure are blanketing television, streaming services and radio with advertisements featuring drivers in support of Proposition 22, many workers also rallied in support of AB 5 and oppose the ballot measure.

Labor unions, led by the Service Employees International Union, United Food and Commercial Workers and the Teamsters Union, have raised about $10 million for their opposition campaign. 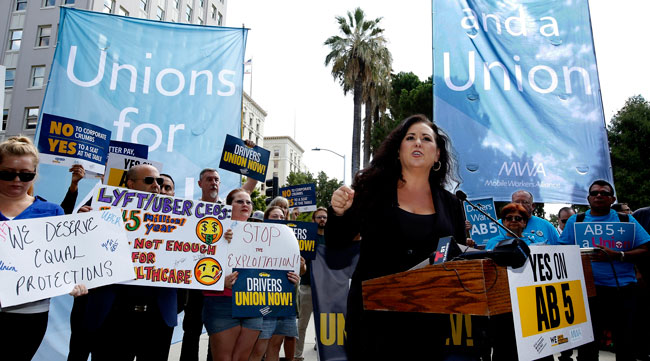 California Assemblywoman Lorena Gonzalez speaks at a rally calling for the passage of AB 5 in August 2019. (Rich Pedroncelli/Associated Press)

With a built-in pool of union workers to conduct phone banks and knock on doors, organized labor in California can typically put up a good fight against campaigns with more money. But the pandemic has made it harder to gather union workers together to make hundreds or thousands of calls to potential voters and created new concerns about door-to-door contacts.

Despite the potential of being outspent 18 to 1, labor hopes the title and summary of the ballot measure, which explicitly notes that app-based transportation and delivery companies would be exempt from providing employee benefits, is a boon to their cause.

“Voters are smart and when they see and understand who is behind this and what their motivations are, they immediately get this is about corporations who want to buy themselves a law to keep exploiting their workers,” said Mike Roth, a spokesman for the “No on Prop 22” campaign.

The Berkeley poll found a few key differences among likely voters, with 42% of Democrats opposing Proposition 22 compared with 53% of Republicans who support it and many still undecided.

Opinions seemed to track with political leanings across California. Opposition is the highest in the Bay Area, where 42% of voters are against exempting app-based companies from having to treat their workers as employees. In Orange County, 46% of likely voters support the measure.