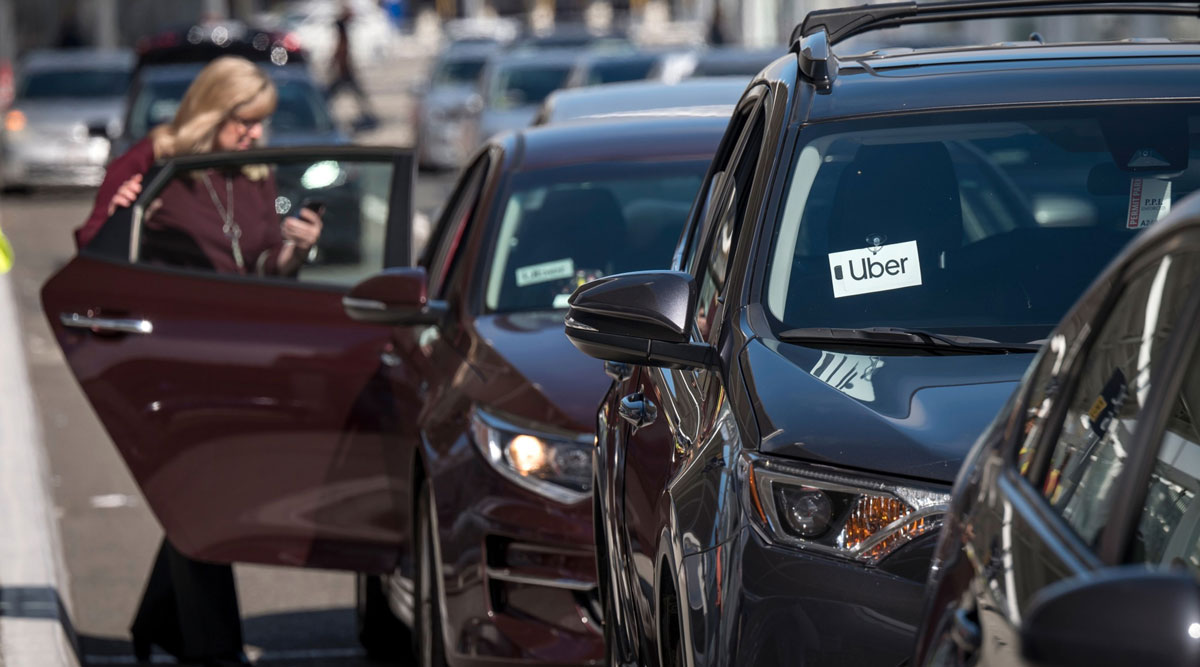 A traveler gets into a car displaying Uber signage at the Oakland International Airport in August 2019. (David Paul Morris/Bloomberg News)

Uber Technologies Inc. CEO Dara Khosrowshahi’s warning that the company may have to temporarily shut down in California is textbook strategy for the ride-hailing giant: When adverse court rulings hit, appeal to the public for support and seek to delay regulatory action.

Legal experts say buying time is the name of the game after California won a court order this week requiring Uber and rival Lyft Inc. to convert their drivers from contractors to employees — an existential threat to their business model and that of the broader gig industry.

Uber’s short-term objective is to keep the sweeping enforcement order from taking effect until Californians vote in November on a ballot measure that would exempt app-based transportation and delivery companies from the law known as Assembly Bill 5. Uber, Lyft, Postmates, Instacart and DoorDash have poured nearly $111 million into a campaign that’s among the state’s most expensive ever and has raised 128 times as much money as the opposition.

If voters don’t provide a reprieve, Uber’s goal is to keep appealing court rulings as long as it can, according to lawyers and professors who’ve watched the company maneuver through regulatory crises for a decade. In London, where Uber is embroiled in a similar fight to keep its drivers from being reclassified as employees, the battle is now in its fifth year — with the U.K.’s highest court expected to issue a final decision soon.

University of California at Berkeley law professor Catherine Fisk said Uber is basically playing the same game as lawyers who defend criminals against the death penalty in its effort to avoid spending billions of dollars on drivers for overtime, health care and other benefits.

Khosrowshahi said in a television interview Aug. 12 that it would be difficult to quickly change Uber’s labor model in California, where the company employs hundreds of thousands of drivers, if the Aug. 10 ruling isn’t kept on hold by the courts beyond 10 days. Lyft President John Zimmer issued the same warning in an earnings call, saying “Lyft cannot comply with the injunction at the flip of the switch.”

Uber and Lyft are set to ask the judge at a hearing Aug. 13 to keep the ruling on pause for the duration of the appeals process. Uber and Lyft didn’t respond to requests for comment about their legal strategies.

Just as Uber lost multiple rounds in court in the U.K. on a slow path toward final resolution, Uber and Lyft face an uphill fight in their California appeal after the San Francisco judge who issued the preliminary injunction against them wrote that the companies’ defense “flies in the face of economic reality and common sense.”

Travis Lenkner, a lawyer who represents workers against gig companies including Uber, DoorDash and Postmates, noted that the ruling faulted the companies for a “prolonged and brazen refusal to comply with California law.”

“Their arguments aren’t succeeding,” he said. “The only thing that has been moderately successful is the stall game.”

Delay tactics in corporate litigation are nothing new. Fisk traces this back to the 1930s, when New Deal legislation was enacted and companies had an organized litigation campaign to squelch the effectiveness of laws regulating minimum wage and the right to unionize.

Uber, Lyft and other gig-economy companies have long fought rulings that would force their drivers to be classified as employees.

The California labor law test that makes it more difficult for these companies to lean on the contractor model has been in place since a 2018 California Supreme Court ruling and was codified into law in 2019. Other states, including Massachusetts, New Jersey and Connecticut, have similar tests to determine who should be a contractor. The companies have successfully used arbitration agreements that are a standard feature of driver contracts to keep disputes out of court.

Shannon Liss-Riordan, a Boston-based attorney who has faced off against gig companies for years, said that while the Aug. 10 ruling was a historic win, the credit goes to a government action — a lawsuit brought by the state attorney general.

“Uber and Lyft have been leaders in this area,” Liss-Riordan said. “So many companies have been watching them and seeing what they get away with. I think a lot of companies will be paying close attention to this case.”