James Rogers, Spartan Direct: 'Needed to Serve Something Bigger Than Me' 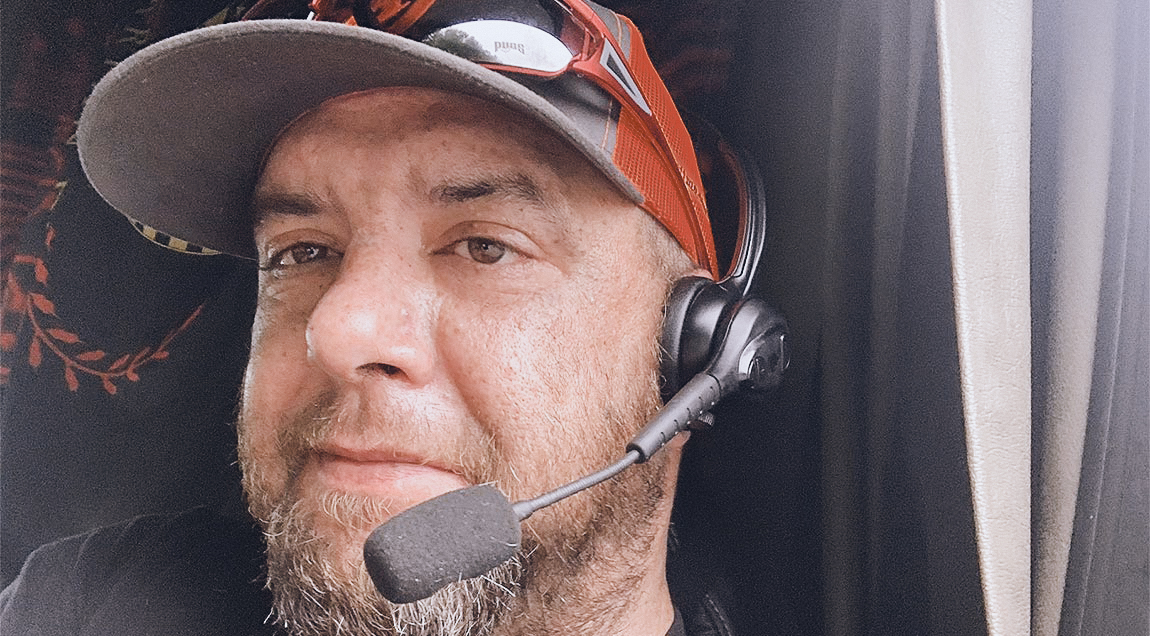 Rogers and his company's drivers have hauled emergency relief supplies such as hand sanitizer and personal protective equipment during the pandemic. (Courtesy of Shannon Currier)

Rogers, an Army veteran who has a passion for serving his country, jumped into action to deliver supplies when COVID-19 hit the United States, and went out of his way to cover for a colleague who fell ill during the pandemic. Watch a video interview with Rogers here.

On the Fourth of July weekend, when neighbors were figuring out how to stage their own fireworks displays and people cautiously gathered for backyard barbecues, truck driver James Rogers returned home for the first time in three months.

Rogers, 43, owns Spartan Direct, a small trucking company based in Pevely, Mo., about 30 miles south of St. Louis. When the coronavirus pandemic struck, Rogers and his team of three drivers immediately began hauling emergency relief supplies, such as hand sanitizer and personal protective equipment, to help support the nation’s response to the outbreak.

They’ve primarily transported loads of Procter & Gamble Co. goods from the company’s Edwardsville, Ill., facility to places such as Salt Lake City and Seattle. At the height of the pandemic, Rogers said they’d run all the way to Salt Lake City and deadhead back to the St. Louis area to pick up another load of emer­gency supplies before driving west again.

As the owner of a small fleet, Rogers deals with challenges associated with both trucking and small business ownership. He said hauling relief loads has been key to his company’s survival over the past several months, and expressed gratitude for the Federal Motor Carrier Safety Administration’s emergency declaration that offered exemption from certain hours-of-service regulations for carriers involved in coronavirus-related relief efforts.

“It hasn’t been easy,” Rogers said. “We were on the brink. It was a teeter-totter. When the pandemic happened, honestly, if it wasn’t for relief loads, we’d probably be out of business.”

When restaurants and rest areas shut down, Rogers and his teammates stockpiled their trucks with food and invested in camping toilets. If food was running thin and Rogers knew he’d be traveling near his home in Pevely, he’d arrange to meet his wife Jennifer somewhere for a contactless grocery hand-off.

In late May, Spartan Direct contract driver Kevin Lewis came down with symptoms of the coronavirus, which he described as “the cold from hell.”

When he learned of his colleague’s health, Rogers met Lewis at a truck stop outside Cheyenne, Wyo., picked up his trailer, delivered his load for him and brought the trailer back.

Lewis returned to his home in Springfield, Mo., where he and his wife Melissa, who herself was already feeling sick, quarantined in their apartment for more than two weeks.

Lewis doesn’t know where he caught the virus; his best guess is he was infected while passing through a travel center. While he and Melissa were recuperating, he said Rogers would call to check on them. They’ve both since recovered.

“I honestly feel that his No. 1 concern is us as his contractors,” Lewis said, speaking to Transport Topics from Hutchinson, Kan., where he was picking up a load of sodium product bound for a feed and seed facility. “He’s just an upright dude. You can’t find a better person.”

Rogers knows what it is to face hardships and spend long stretches of time away from home. He served in the U.S. Army for 11 years, stationed in Afghanistan with a platoon he described as a “jack-of-all-trades” crew that conducted missions for security, route clearance and resupply.

Prior to joining the Army at age 27, the enlistment age of “an old man,” Rogers drove trucks, a skill which he was able to utilize during his military service behind the wheel of Humvees and armored vehicles.

During the platoon’s response to an attack on its forward operating base, Rogers sustained a severe back injury as he helped a fellow soldier mount a machine gun on a vehicle. A rocket-—propelled grenade struck the opposite side of the vehicle, blowing Rogers away and causing him to land hard on the base of his neck.

When he woke up in the aid station, he didn’t know he had broken his back, and neither did his physicians. He only knew he didn’t want to leave his team. It took a couple of years and a return to the United States for a doctor to identify his broken back, which, at that point, hadn’t healed properly. Rogers knew something was physically wrong; he could no longer run, he relied on a cane and he experienced bodily shakes. The Army ultimately discharged him for medical reasons.

Rogers’ return to civilian life was rocky. Hooked on strong pain medication, he’d exhaust a 90-day prescription in a month. He’d carry around a Food Lion bag full of prescriptions, ranging from Percocet and Vicodin to OxyContin and a fentanyl patch. He found rock bottom when Jennifer discovered him in the bathroom with a pistol one day. He credits her with talking him off the ledge, at which point he decided to make a positive change and re-enter the trucking industry. 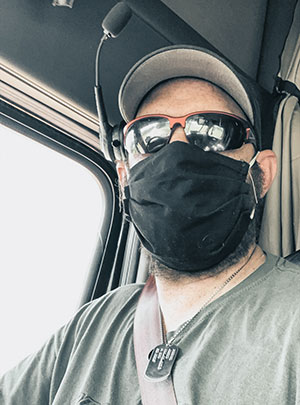 As a small business owner, Rogers deals with challenges related to both business ownership and trucking. (Courtesy of Shannon Currier)

Rogers moves pretty well these days, although he still deals with post-traumatic stress disorder and anxiety. He’s mastered strengthening exercises to help with pain management and inflammation. He’s been sober for about three and a half years.

The idea to create his own trucking company came in 2017, at which point Rogers was driving for Prime Inc. He was awarded a truck and authority as an owner-operator in the spring of 2018 through the Keys to Progress program, a partnership between Progressive Insurance and the St. Christopher Truckers Relief Fund, a charity that helps injured truckers and their families.

Shannon Currier, director of philanthropy and development for the St. Christopher Truckers Relief Fund, first met Rogers on paper in November 2017, when she was reviewing applications for the Keys to Progress program. It was Currier who nominated Rogers for recognition as a Trucking Frontline Hero. Currier and Rogers developed a rapport through phone interviews over a series of months before meeting in person in March 2018 at the Mid-America Trucking Show.

“He’s one of those people that you meet and you’re like, ‘Have I known you my whole life?’ ” Currier said. “He just wanted to do his job and he was positive about it. You really have to have a good business sense and be prepared for emergency situations, and goodness, who could’ve prepared for something like this? Nobody. But [I think] being as prepared as possible is what has helped him stay successful through all of this.”

Rogers hauls all sorts of goods, ranging from hay bound for a therapeutic riding farm in Wilmington, N.C., to masks and gowns destined for Indianapolis. When he speaks to TT, he’s in Madison, Ala., delivering a load of groceries.

Rogers is willing to drive anywhere for a load, but he particularly enjoys the Midwest and Northeast, noting that a lot of his family is from upstate New York. His dream load would take him from Maine to Seattle, allowing him to cruise across North Dakota, Montana and northern Idaho on his way. 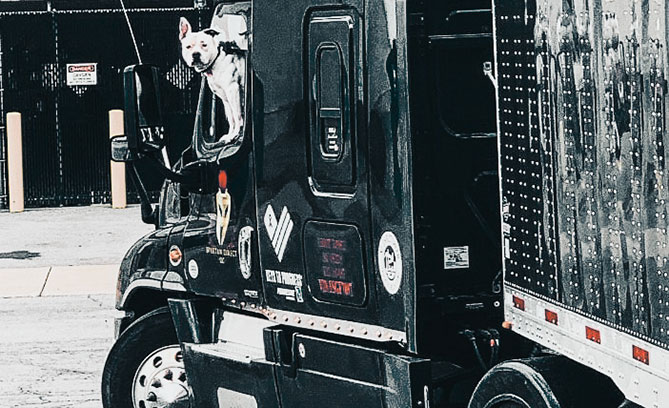 “Every time I drive down the road, I look out the window and, being a combat veteran and seeing death, destruction and third world countries, I get to further appreciate why I did it. I further appreciate why I served,” Rogers said. “I know people get aggravated with trucks. But, it’s that satisfaction that if that’s the worst thing that you’re worried about, and you have no idea what’s going on in the rest of the world, then somewhere along the line either myself or a fellow veteran has done something right.”

Rogers goes long stretches without seeing his family, but he’s never alone. His service dog, a stout American Staffordshire terrier named Sergeant, is his constant companion. Sergeant, who turns three this Thanksgiving, goes with Rogers everywhere. If Rogers steps out of the cab, Sergeant watches him using the truck’s mirrors. He senses and responds to Rogers’ needs, laying on his chest if he has a nightmare or supporting him if his ankles give out.

When he’s not driving, Rogers enjoys fishing, hunting and spending time with his family, which, in addition to Jennifer and Sergeant, includes three kids and a grandson. At the time he spoke to TT, he said he plans on going home in early August and spending about a month off, but he acknowledged that he’ll probably “keep bugging” his Congressional representatives to secure some relief for independent truckers such as himself. He noted that a lot of small fleets are still perched on that financial teeter-totter that he encountered during the pandemic’s outbreak.

“I would like to consider myself fortunate,” Rogers said. “There are a lot of people that are floundering. We put a lot of that work in. In a time when we answered the call of the country, now everybody’s kind of in a position of, ‘When are they going to answer our calls?’”