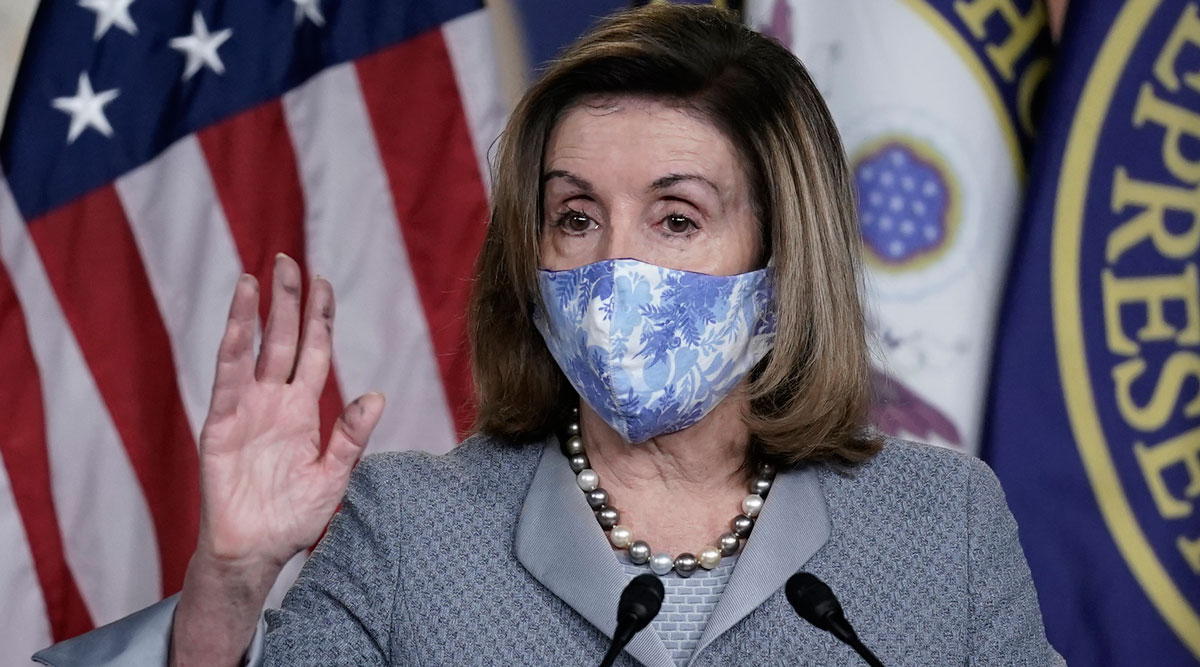 Speaker of the House Nancy Pelosi holds a news conference at the Capitol on Oct. 29. (J. Scott Applewhite/Associated Press)

Pelosi said the bills, from the party’s own top 10 list of legislation that has already passed the Democratic House this session of Congress, “fit comfortably” with what Biden is proposing in his “Build Back Better” platform. They are bills that “we will pass again in a new Congress,” she said.

“Those are two great big initiatives that we have — and we welcome — to rescue our country from a pandemic, from an economic downturn,” Pelosi said.

The California Democrat is preparing the new year agenda as Democrats are heavily favored to retain control of the House in the Nov. 3 election, and Democratic nominee Biden seeks to deny President Donald Trump a second term. Pelosi and Biden are decades old friends who are in touch as needed as he campaigns for the White House.

“You always have to be ready,” Pelosi said. “It’s not as if you are assuming anything, it’s that you’re assuming that it’s possible.”

The Democratic leaders’ priorities are aligned in many ways even as there are stark differences within the party’s liberal base and more centrist lawmakers on health care, infrastructure investment and other big issues.

A prospective Democratic agenda is coming together even as Pelosi and the Trump administration are still negotiating a potential coronavirus aid package that has stalled before the election.

Pelosi said expanding the Affordable Care Act and making infrastructure investment to begin to “build back” the country in a “green and sustainable” way will be on the to-do list next year.

She pointed to the first nine bills of this Congress that were approved by the House as part of its “For the People” agenda that helped the party win majority control in the 2018 midterm election.

They included a transportation and infrastructure bill and a measure that would require the federal government to negotiate with the drug companies for lower prices and would provide some new prescription discounts to people using Medicare.

Biden’s proposals go further on several fronts. For example, his health care proposal would add a “public option” to the Obama-era health law, which he helped pass while serving as President Barack Obama’s vice president.

While Biden’s plan goes further than the House Democratic bill, it’s not as far-reaching as some of the “Medicare for All” proposals sought by liberal lawmakers.

The other Democratic bills on Pelosi’s list include legislation to overhaul the immigration system with a path to citizenship for those who are in the United States illegally and to require background checks for gun purchases.

Biden said during the second presidential debate that an immigration overhaul would be part of his agenda in the first 100 days.

Pelosi said at a news conference Oct. 29 that first up would be legislation designed to expand voting access, change campaign financing laws and impose new government ethics requirements, among them that presidents disclose their personal tax returns.

Much of the House’s legislative priorities stalled in the GOP-controlled Senate, where Senate Majority Leader Mitch McConnell (R-Ky.) took pride in stopping them. The Senate has become known as the graveyard for Democratic bills.

McConnell is now trying to retain the majority as GOP senators fight to win reelection alongside Trump.

Pelosi, who plans to run again for speaker if Democrats keep House control, said she is hopeful the new agenda will find bipartisan support in the Senate, though that seems unlikely given that Republicans have strongly resisted the proposals in the past.

She declined to give a view on whether the Senate should do away with the filibuster — the 60-vote threshold typically needed to advance legislation — if Democrats win the majority on Election Day. In the 100-member chamber, the practice allows a minority halt action.

Former Sen. Harry Reid of Nevada, the onetime Democratic leader, said in a recent interview that Biden should wait “no more than three weeks” to test bipartisanship before doing away with the filibuster. Reid said the practice has outlived its usefulness.

Pelosi did mention, however, that Democrats have another tool at their disposal — the reconciliation process — which allows for a simple majority threshold to pass some provisions as part of the budget bills. Democrats used this in passing Obamacare 10 years ago.

“We will protect our priorities,” she said.

Buttigieg Kicks Off I-15 Project at Las Vegas Strip