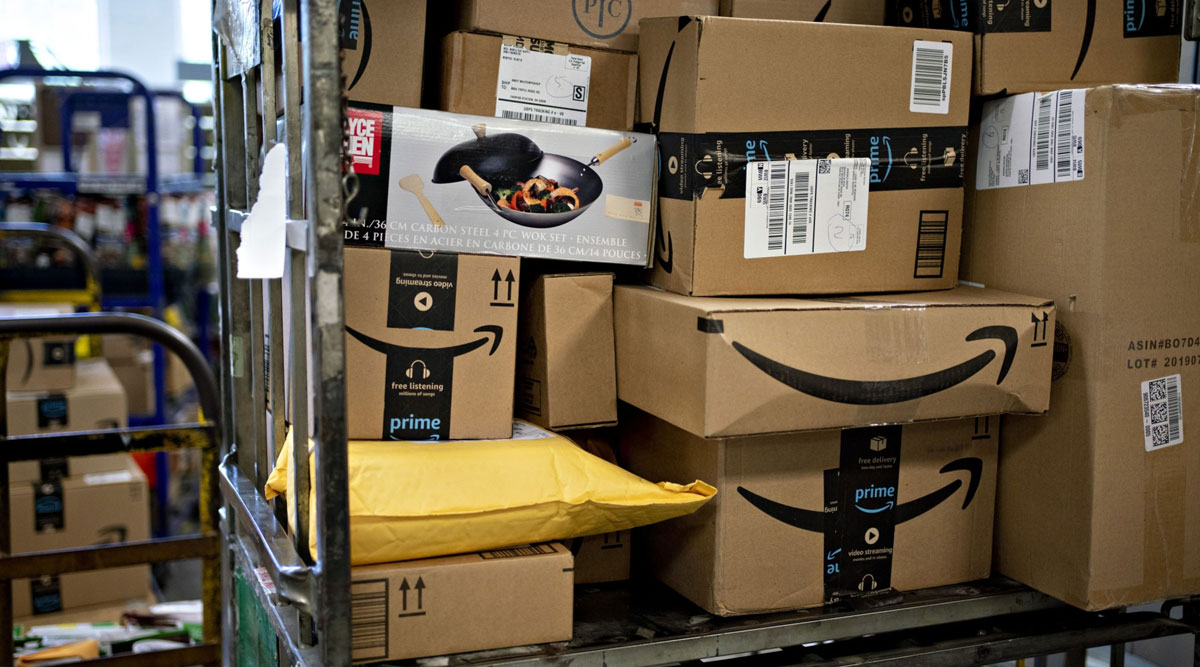 Amazon boxes sit at a USPS facility in Fairfax, Va., in May. (Andrew Harrer/Bloomberg News)

American shoppers shunned stores and extended their online binge during the last weekend before Christmas, adding to a package-delivery logjam that’s now reaching a crescendo.

There’s “a lot of stuff all hitting at once,” said Craig Johnson, president of Customer Growth Partners. “I think it’s past the time for creative. They have to charge people extra to get it there.”

With COVID-19 cases surging in the U.S., foot traffic slumped nearly 40% at retail stores last weekend compared to the same period last year, according to data provider Sensormatic Solutions. Activity during “Super Saturday” and Black Friday weekends was so low, in fact, that the company has revised its forecast for the entire holiday season: It now expects in-store traffic during the six-week holiday period to fall between 34% and 36% this year, worse than the 22% to 25% drop it had been expecting earlier in the season.

With crowd-wary shoppers choosing to order online instead of in-store, the U.S. Postal Service is in the midst of one of its busiest holidays ever, threatening to delay millions of packages that won’t arrive in time for Christmas. On its website, the postal agency cites “unprecedented volume increases and limited employee availability due to the impacts of COVID-19.” The Washington Post reports some processing plants are now refusing to accept new mail shipments.

Unlike UPS Inc. and FedEx Corp., the post office is “accepting all volume that is presented to us, which is adding to our challenges,” the agency said.

“The U.S. Postal Service, similar to the broader shipping sector, continues to face near-term pressure on service performance across categories as it manages through a historic record of holiday volume this season,” the post office said in the statement. “This negative impact is compounded by the temporary employee shortage due to the COVID-19 surge.” 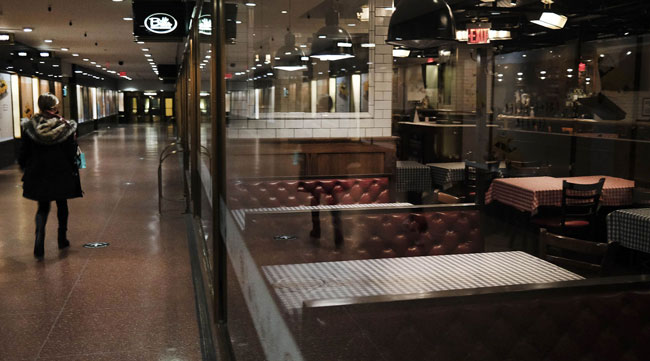 A shopper walks by a closed restaurant inside Rockefeller Center in New York on Dec. 20. (Spencer Platt/Getty Images)

Retail watchers have been referring to the potential package-delivery crunch as “Shipageddon” for months, with big-box and department stores encouraging Americans since October to buy online and pick up gifts curbside instead. They continued to advertise the service this week, with Target Corp. letting shoppers order as late as 5 p.m. on Christmas Eve and still pick up their order that night.

At Best Buy Co., the company is turning to a new kind of delivery driver to get packages to customers in time: its own employees. The electronics retailer this year introduced a service where workers drop off online orders at customers’ homes, with the service now in about 85% of U.S. stores, a Best Buy spokesman said. It’s separate from the existing partnerships with Shipt, Instacart and Roadie already in place to try to meet soaring delivery demand.

Shoppers who got used to easy two-day shipping during the pandemic took to social media to air their concerns as packages sent through the post office appeared stuck in transit. Some shoppers lamented priority packages that appeared to go to the wrong cities for long layovers. Others asked to go pick up their boxes themselves. One popular meme depicting musician Drake reads: “I don’t know who needs to hear this. But stop trying to track that package. It’s in God’s hands now.” Phrases like “USPS delays” and “USPS gridlocked” were trending as popular Google search terms.

UPS and FedEx are moving packages in their overnight networks for last-minute orders. But they’re following a playbook for this peak season of taking only the volume of packages they can handle to avoid overwhelming their networks.

That makes the Postal Service the carrier of last resort for many retailers. Likewise, couriers that don’t have last-mile delivery service, including Deutsche Post AG’s DHL unit and Pitney Bowes Inc., hand off pre-sorted packages to the post office.

The on-time performance for the Postal Service was 86.1% for parcels due to be delivered between Dec. 13 and Dec. 17, according to ShipMatrix, which provides data on the package-delivery industry. That was down from 95.4% for the week ending Nov. 21. The on-time measures have dipped a bit for FedEx, and UPS but they are still comfortably above 90%.

The numbers should improve because most retailers cut off free shipping for orders after Dec. 18 and are having consumers pay for express shipping for later purchases, said Satish Jindel, founder of ShipMatrix. More people will end up going to stores in the final days to make sure they bring home gifts on time.

“The deluge came last week, and now it has subsided because people know they’re not going to get their packages on time,” said Jindel, who predicted that the on-time performance for the Postal Service will rise to the mid-90s as its network gets “flushed out” this week.

Still, there could be more than a million undelivered packages by Dec. 25, Jindel said, although it’s unknown how many of those are gifts versus household items that people are still ordering because of the pandemic.

Shoppers can’t say they weren’t warned. On Nov. 19, the Postal Service announced deadlines of Dec. 15 for regular ground service and Dec. 18 for first-class packages to arrive by Dec. 25.

Retailers have been working hard to funnel customers to that option this year. But the pressure is still high: Businesses are trying to make up for lost sales during the onset of the pandemic, so getting delivery wrong isn’t an option.

“Retailers’ performance during the pandemic, and especially in the crucible of the COVID Christmas shopping season, has been nothing short of heroic,” Mike Cassidy of Signifyd wrote in a blog post earlier this month. “But retail is in for a reckoning. You can add Shipageddon and the weakness in retail’s fulfillment system to the list of trends that the coronavirus pandemic has accelerated.”