Hundreds of Truck Drivers Stranded in Britain Due to Coronavirus Restrictions 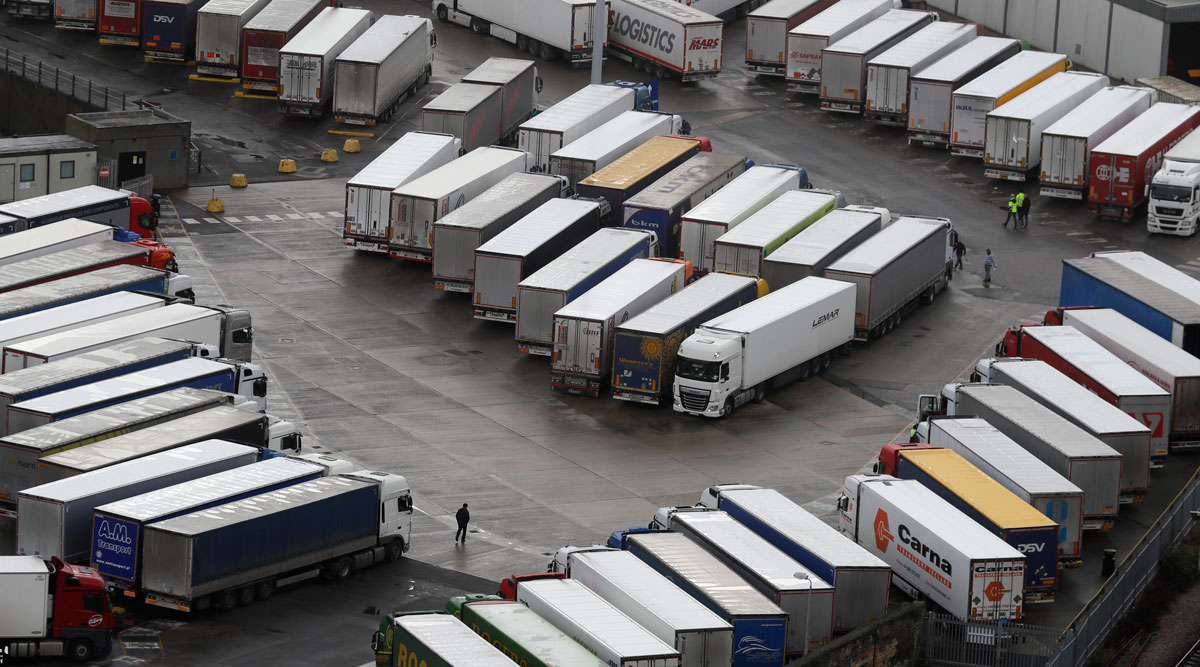 LONDON — Hundreds of stranded truck drivers hoped to get the green light to leave Britain on Dec. 22 as the country found itself increasingly isolated and its trade bottled up, cut off by neighbors afraid of a new strain of the coronavirus circulating in England.

More than 1,500 trucks snaked along a major highway in southeast England near the country’s vital English Channel ports or crowded into an unused airport on Day 2 of an ordeal that began when dozens of nations banned flights from the U.K. and France barred entry to its trucks for an initial 48 hours through the night of Dec. 22.

The precautions were prompted by a new variant of the virus that is believed to be more contagious, though experts say it does not appear to be more deadly or vaccine-resistant.

On an island nation that relies heavily on its commercial links to the continent, the travel restrictions have stoked fears of food shortages over Christmastime. 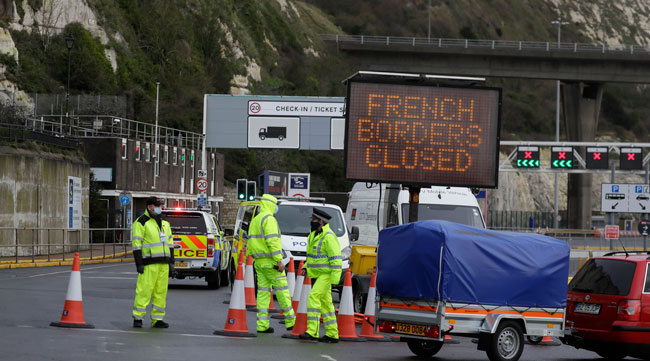 Security officers guard the entrance to the ferry check-in at the Port of Dover on Dec. 22. (Kirsty Wigglesworth/Associated Press)

Britain is already facing deep uncertainty over its final exit from the European Union in less than two weeks. The country has yet to work out a post-Brexit trade deal with the EU.

For the drivers, it has been a grim couple of days, with some complaining about the lack of toilet facilities and food.

“My family is waiting for me, my children, my daughter, my son, my wife,” said Greg Mazurek of Poland. “It was supposed to be a very quick trip, three to four days max. I spent in the U.K. 10 minutes in the gas station and 20 minutes unloading, and now I need to wait two days here in the port in Dover.”

Drivers held out hope the ordeal might end within hours. The prospects seemed to improve Dec. 22 when the EU’s executive arm recommended a lifting of the bans.

The European Commission said people returning to their home countries should be able to do so provided they test negative for the virus or quarantine. It said that “cargo flows need to continue uninterrupted.”

Discussions continued between Britain and France, with any solution likely to center on the testing of drivers for the virus.

Given that around 10,000 trucks pass through Dover every day, accounting for about 20% of the country’s trade in goods, retailers are getting increasingly concerned.

Andrew Opie, director of food and sustainability at the British Retail Consortium, warned of potential shortages of fresh vegetables and fruit after Christmas if the borders are not “running pretty much freely” by Dec. 23.

The problem, he explained, is that the empty trucks sitting in England can’t reach the continent to pick up deliveries for Britain.

The virus is blamed for 1.7 million deaths worldwide, including about 68,000 in Britain, the second-highest death toll in Europe, behind Italy’s 69,000.

Over the weekend, Prime Minister Boris Johnson imposed strict lockdown measures in London and neighboring areas amid mounting concerns over the new strain, which early indications show might be 70% more transmissible.

Johnson scrapped a planned relaxation of rules over Christmastime for millions of people and banned indoor mixing of households. Only essential travel will be permitted. 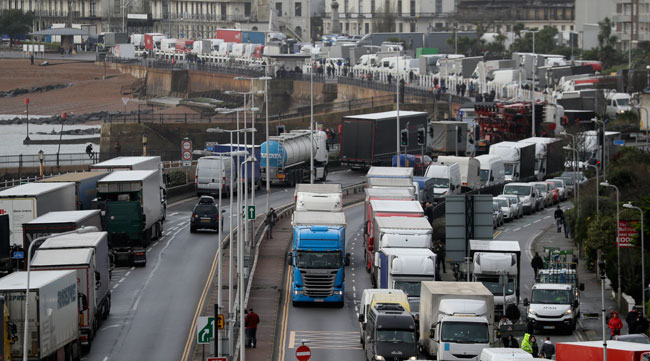 Trucks park on the road while the Port of Dover remains closed on Dec. 22. (Kirsty Wigglesworth/Associated Press)

Amid questions about whether the vaccines being rolled out now will work against the new strain, Ugur Sahin, chief executive of BioNTech — the German pharmaceutical company behind the Pfizer-BioNTech shot — said he is confident it will be effective, but further studies are needed to be sure.

In Switzerland, meanwhile, authorities are trying to track an estimated 10,000 people who have arrived by plane from Britain since Dec. 14, and have ordered them to quarantine for 10 days. Switzerland was one of the 40-odd countries to ban flights from Britain over the new strain.

The quarantine order is likely to affect thousands of Britons who may already have headed to Swiss ski resorts. Unlike many of its neighbors, Switzerland has left most of its slopes open, attracting enthusiasts from around Europe.

DB Schenker Halts Deliveries to UK Due to Brexit Trouble