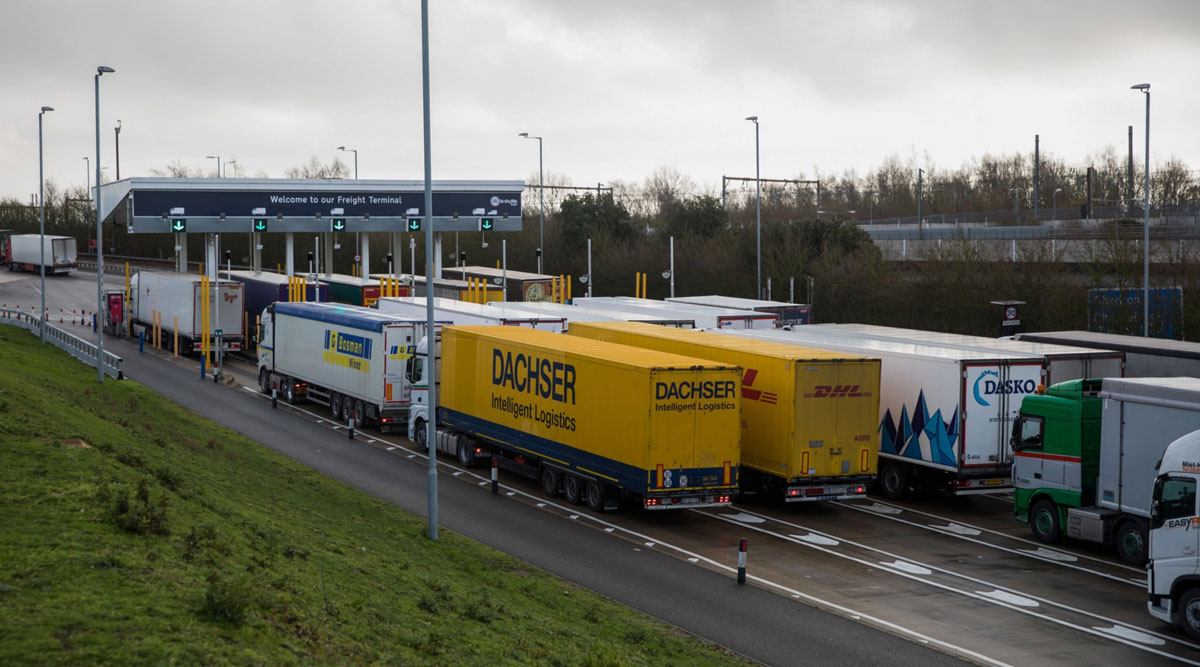 Trucks wait at the check-in for the channel tunnel in Folkestone, U.K. (Chris Ratcliffe/Bloomberg News)

DB Schenker, owned by rail giant Deutsche Bahn AG, told Bloomberg that a major German industrial customer has asked it to send parts to and from British production facilities by air from Jan. 1, instead of the usual trucks or ships. It declined to name the client.

DSV is separately working to establish a daily air shuttle between mainland Europe and the U.K. from the start of next year to help customers maintain deliveries, though the plan is a “work in progress,” it said in an email. The companies are among the world’s five largest freight forwarders.

The moves come as surface links become increasingly congested ahead of the Dec. 31 completion of Britain’s split from the European Union. Roads approaching the French ferry port of Calais have been clogged since last week by rush shipments that have come on top of the usual pre-Christmas surge and restocking after pandemic lockdowns. In a new development, 7-mile jams were reported outside Dover, England, evidence roads are becoming snarled in each direction.

Companies that rely on just-in-time deliveries by truck, such as auto manufacturers, are most vulnerable to the upheaval. The absence of a single component can shut down entire production lines.

DSV Panalpina ranks No. 23 on the Transport Topics Top 50 list of the largest logistics companies in North America. DB Schenker USA ranks No. 24.

Luxury carmaker Bentley Motors Ltd., based in Crewe, England, and owned by Volkswagen AG, has booked a fleet of five Antonov cargo planes on a time-share basis for the possible transport of vehicle bodies, engines and other parts, CEO Adrian Hallmark said this month.

Bentley has also arranged extra warehouse capacity, though even now it will carry supplies for 14 days of production, up from just two previously.

The possibility of Britain exiting the EU without a trade deal hung in the balance, with Michel Barnier, the bloc’s chief Brexit negotiator, saying Prime Minister Boris Johnson must accept limits on access to the single market in return for greater control over fishing.

Borders are still not set up to deal with customs paperwork and the ensuing delays will lead to a shift of some freight from truck to airplane, according to Cinzia Angelini, an air-freight exporter at freight forwarder Simarco International Ltd.

“Even before Brexit, ports are already struggling with congestion and shortage of containers,” Angelini said. “That’s only going to get worse on Jan. 1 and so airfreight traffic is likely to pick up further in 2021.”