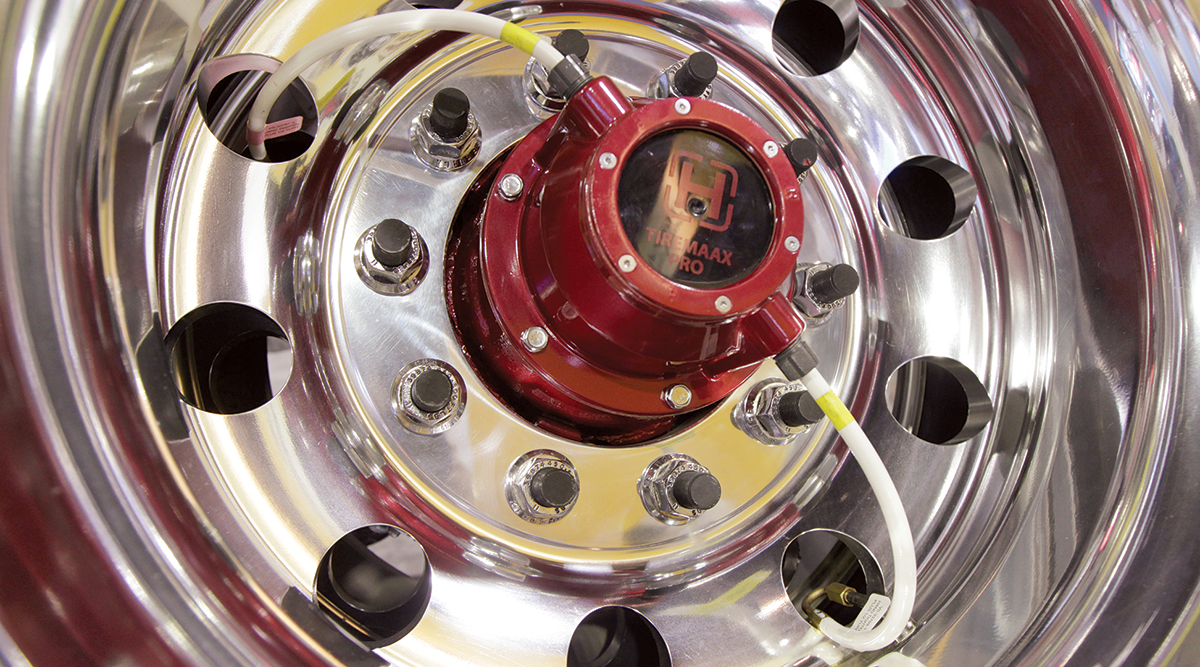 A view of the Hendrickson tire inflator at the 2017 North American Vehicle Show in Atlanta on Sept. 26, 2017. (John Sommers II for Transport Topics)

Blown-out, flat or damaged tires are considered by fleets to be at least a leading cause of roadside maintenance calls for commercial trucks, while underinflated tires are the single-biggest source of tire issues in general.

To help prevent these tire-related maintenance and safety problems, technology suppliers have introduced a variety of automatic tire inflation systems, or ATIS, and tire pressure monitoring systems, or TPMS.

But trucking companies must decide which approach is best for their operations: ATIS systems that automatically add air to underinflated tires, TPMS systems that prompt the driver to take action when a tire is low, a combination of both ATIS and TPMS or simply relying on their drivers to carefully check tire pressure manually.

Motor carriers as well as suppliers typically are quick to say there is no one-size-fits-all solution.

It’s “pretty evenly split right now” between the adoption of TPMS versus ATIS among truck fleets, said Lee Alexander, director of product management for internet of things platforms at Stemco. “Some people like TPMS since they want to know there is a problem and do something about it,” Alexander said. “Some prefer inflation as they like to try and get the vehicle to a safe spot rather than being stranded.” 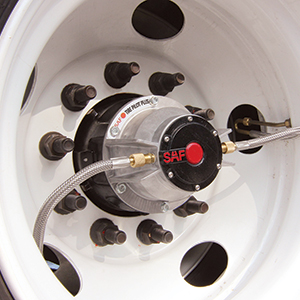 Tire Pilot Plus maintains equal pressures across trailer tires as well as the minimum pressure needed in the event of a tire failure. (SAF-Holland)

For South Shore Transportation in Akron, Ohio, ATIS from Pressure Systems International, or P.S.I., largely has been sufficient for the company’s fleet of 160 power units and 450 trailers, said Kevin Tomlinson, director of maintenance.

The system also has a light on the front of the trailer indicating if there is an air leak or a tire failure so that “the driver then becomes aware that there’s a problem,” Tomlinson said.

For trailers, however, the challenge is greater.

“There are a lot of companies out there that don’t get to see their trailers all the time — so that is a different story,” Tomlinson said. “But, your first line of sight is always your driver.”

Each fleet must determine which solution is best for their operations based on the application, driver demographics, regional considerations and prior experience, said Bill Hicks, product manager for suspension systems at SAF-Holland. That said, “based on informal market intelligence,” the market preference is for ATIS technology because it automatically reacts and attempts to correct the low tire-pressure situation, Hicks said. SAF-Holland, which recently acquired Pressure Guard, offers the Tire Pilot Plus ATIS.

“The TPMS can only inform the driver or fleet manager to a situation that typically requires additional time and mileage to address,” Hicks said. “However, TPMS has its place and is very effective for specific fleets and their applications.” 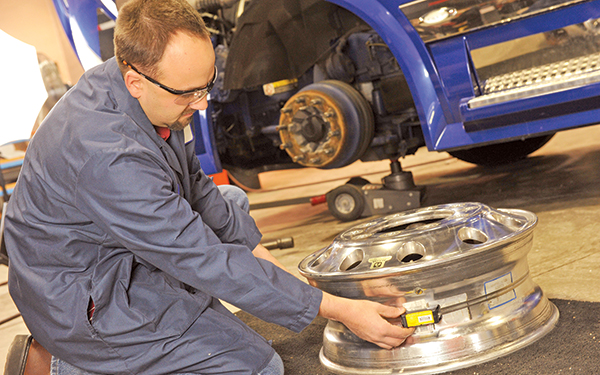 Thomas Grimshaw, who supports truck maintenance at Lawrenceville, Ga.-based Performance Trucking, said the company has been able to reduce the volume of service calls after implementing TPMS from Bendix Commercial Vehicle Systems.

“The main thing is not only just cutting costs — it offers more consistency for the fleet,” Grimshaw said. “We can get tires repaired at repair stations, which is a lot safer. TPMS also allows us to make a delivery possible that we wouldn’t have been able to before.”

Other carriers, especially longhaul fleets with equipment that spends many days away from the terminal, require more intensive tire pressure-management capabilities.

D&D Sexton in Carthage, Mo., equipped its fleet with an ATIS about 10 years ago, and more recently began remotely tracking tire status as well.

To solve the problem, Boes said D&D Sexton began testing P.S.I.’s TireView about three years ago before it recently became commercially available. The product, he said, transmits tire inflation status in real time from the fleet to his desktop.

“When a trailer is dropped and it sits anywhere in the U.S. for a week or more and the tire pressure goes down, I know it, even if it’s not hooked up to the truck as it uses the reefer battery for power,” Boes said. 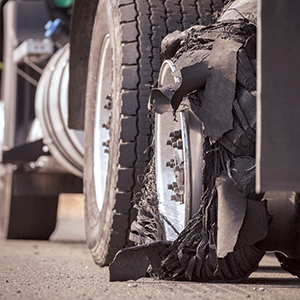 Closeup of a tire blowout of a truck disabled on the side of the road. (Getty Images)

For an ATIS system that requires that the trailer connect to a cab for power, fleets might want to consider implementing both ATIS and TPMS.

While an ATIS can begin to inflate a low tire as soon as the driver hooks up, the downside is ATIS does not necessarily indicate if it cannot keep up with the volume of air loss and can cause further damage if a leak is not addressed, said Jon Intagliata, product manager for TPMS at Bendix.

“As trailers become smarter, the combination of ATIS and TPMS can provide a belt-and-suspenders approach,” Intagliata said.

TPMS versus ATIS also is not necessarily an “us versus them” issue between suppliers, said Vanessa Zaroor Hargrave, director of marketing for Advantage PressurePro.

“Both technologies serve a purpose, and bring specific advantages, and work as a complete and comprehensive solution when used together,” Hargrave said.

What TPMS should do, Hargrave said, is “provide a complete view of how every tire in your fleet is performing.”

With TPMS, a technician or operator is required to take action to respond to an over- or under-inflated tire, said Howard Adkins, technical service manager for trailer commercial vehicle systems at Hendrickson.

“If the fleet is confident they have a robust process for assuring their drivers are actively performing their walk-around inspections and the [preventive maintenance] schedules are being followed, they may opt purely for TPMS — or even nothing at all,” Adkins said.

While Adkins said Hendrickson’s system does not compete directly with TPMS because the system actively maintains the tires as opposed to a technician, he added Tiremaax Pro provides a backup “if there is any reason to believe that these checks are not occurring on a regular basis.”

While 60-70% of new trailers have ATIS installed, fleets, especially large ones, are increasingly realizing that drivers are not fully “incentivized to take care of their tires — they’re incentivized by the mile,” said James Sharkey, vice president, global sales and marketing, for P.S.I. 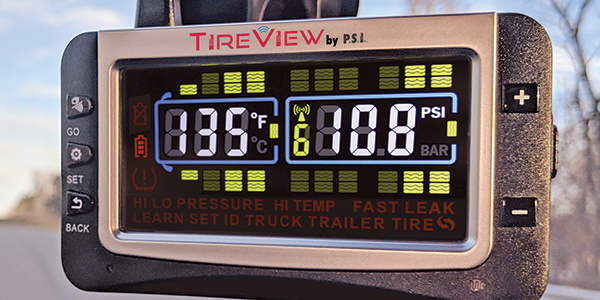 Fleets are “seeing the benefit of going from more of a reactive state to a proactive state by equipping trailers with both ATIS and TPMS,” he said.

Suppliers said ATIS and TPMS provide a return on investment in large part by offsetting the cost of roadside assistance due to a tire failure that these technologies otherwise would have prevented.

In addition to fuel savings by ensuring tires are properly inflated, ATIS and TPMS can help to boost tire longevity, suppliers said.

When tire leaks or damage are detected remotely, or when an ATIS repairs a tire while the truck is in motion, thus enabling the vehicle to reach a terminal for repairs, the incident might cost $30 versus a roadside call for tires that can easily cost more than $700, said Judith Monte, vice president of marketing and customer success for Aperia Technologies.

“Under inflation is something the fleet wants to automatically eliminate, as opposed to having to pay for a service call,” Monte said. Underinflated tires account for 85% of all tire failures, according to Aperia.

Monte noted that the company’s original Halo Tire Inflator product and its Halo Connect platform offer both an ATIS system and a TPMS. Drawing largely from algorithms developed for its TPMS, the company said its system is able to offer real-time tire prognostics by crunching data well ahead of air leaks. The system offers the industry’s only ATIS for both truck tractors and for trailers, according to the company. Halo Connect also communicates safe locations to drivers in need of tire repair through GPS.

Costs for separate TPMS and ATIS systems vary depending on the supplier and technologies. Service contracts vary as well.

According to Stemco’s Alexander, for example, a Stemco dual TPMS sensor costs $125 per wheel-end, while ATIS costs $700 to $850 per system. Advantage PressurePro’s PressurePro TPMS standalone unit retails at $720 for a six-wheel unit. While there is a $50 per sensor cost for additional sensors, a 10-wheel unit would cost $920, Hargrave said.