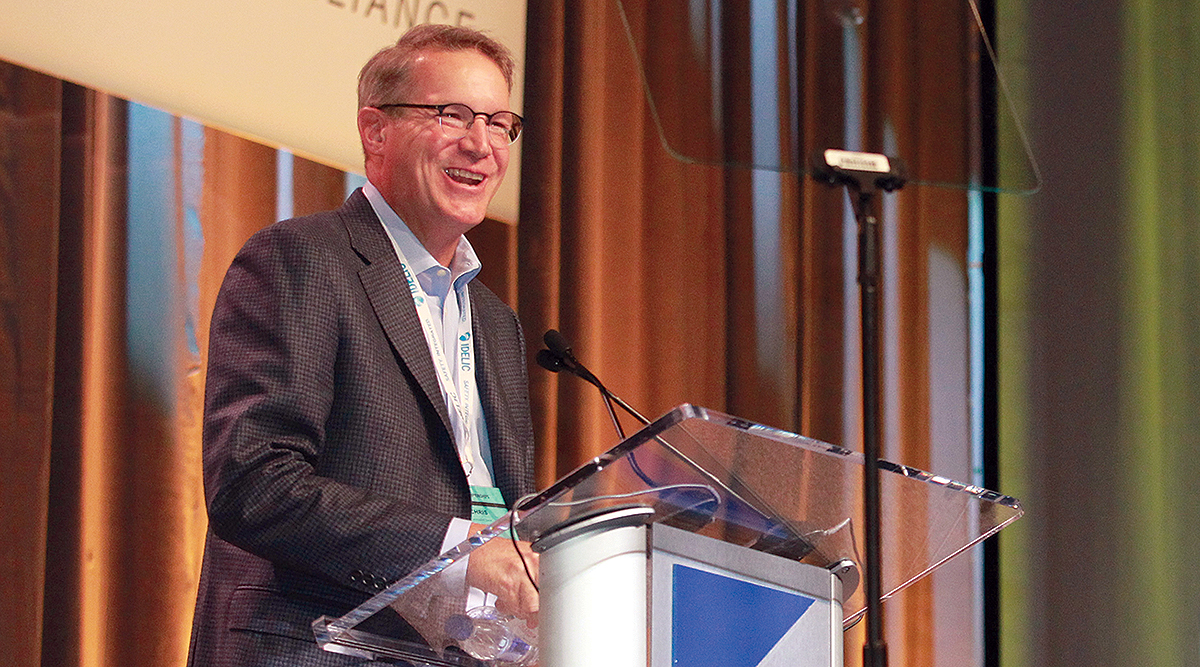 The head of American Trucking Associations plans to focus on fighting back against large court verdicts against the trucking industry, continuing the push for a national infrastructure package and working toward reform for federal hours-of-service rules when the industry gathers for the annual ATA Management Conference & Exhibition in San Diego Oct. 5-9.

“We’re growing very tired as an industry of being picked on by the plaintiff’s bar,” ATA President Chris Spear said. “I think we’re growing very tired of padding the pockets of trial lawyers at the expense of trucking jobs, and we’re just not going to stand for it anymore. It’s an all-out assault against the industry, and we need to be in a position to fight back.”

He added, “When it’s our fault, we’re the first to step up and settle those cases fairly and compensate those folks involved.” 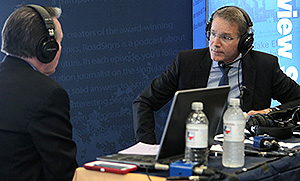 Spear was interviewed on Transport Topics Radio, which airs weekends on SiriusXM Radio.

“We’re seeing suits, massive ‘nuclear’ suits, come against us that are clearly not our fault — not our doing — that are getting extraordinarily generous jury awards, and it’s all at the doing of a narrative that these trial lawyers out there are making — that our industry is devastating the fabric of families involved in these accidents, and in many instances we’re not at fault. But we’re paying substantial money to make it right, and this [legal] profession needs to be called out. It’s wrong.”

He pointed specifically to a case in 2014 where a pickup truck crossed a median on a Texas interstate and struck a tractor-trailer traveling in the opposite direction. One occupant in the pickup died, and others were injured. While the truck driver — a student driver traveling with an instructor — was not cited by police and was traveling below the speed limit, the family’s attorney argued the driver should have pulled over, as weather conditions had deteriorated. The jury in May awarded the family nearly $90 million, but the carrier is appealing the decision.

Spear said it’s these types of verdicts that have him concerned, and pledged to work cooperatively with government leaders on tort reform efforts to address them.

“This is going to be a major focal point at MCE,” he said, noting that he intends to discuss the issue with leaders from all 50 state trucking associations, along with fleet owners and other industry shareholders. The event is being held at the San Diego Convention Center.

“ATA, the federation, is going to be working with those state executives, with those associations to combat that,” Spear said. “It will be done through legislation, through ballot initiatives, through the media, and it will be done state-to-state.”

He added, “On the federal level, the votes may not be there for federal tort reform. In fact, I know that.”

While many on Capitol Hill pledge support for a long-term infrastructure package, legislation has yet to advance to President Donald Trump’s desk. For more than a year, ATA has been pushing Trump and Congress to consider raising the federal fuel taxes on gasoline and diesel — taxes that have remained constant at 18.4 cents per gallon on gas and 24.4 cents for diesel since 1993.

The federation has proposed the Build America Fund, an initiative it said would generate nearly $340 billion for infrastructure needs over 10 years.

“We’re willing to pay more at the pump to get good infrastructure,” Spear said. He noted that several states that have or are considering raising fuel taxes are taking the lead as Washington sits on the sideline.

“These folks on Capitol Hill need to do their job — the job that they were voted to come here to Washington to do,” he said. “They are responsible for funding interstate commerce, and the roads and bridges that come with them and they’re not doing it. They’re failing at that.”

Spear added, “Congress isn’t doing its job. It’s not incompetence. They know what they’re doing. They’re talking a good game, and they’re doing nothing behind the scenes to solve the problem, and we have to call them out on that and hold them accountable.”

Spear said Congress’ lack of action on infrastructure has compelled states to take matters into their own hands. In the case of Rhode Island, however, ATA is appealing a federal judge’s decision to dismiss the group’s lawsuit against the state’s trucks-only tolling plan, which was launched last year. ATA contends the plan is unconstitutional because it discriminates against interstate trucking companies and impedes the flow of interstate traffic.

Spear said that as the country gets closer to Election Day 2020, the prospect of passing an infrastructure package begins to quickly fade.

“I know #ATAmce19 as the place where decision-makers in the industry are.” Between lively general and educational sessions, policy meetings, and a busty exhibit floor - attendees connect and discover why it's so important to meet face-to-face. https://t.co/XdEHl3VAkk pic.twitter.com/exxV1JjQ9c

However, after a recent meeting with Vice President Mike Pence and other administration officials, Spear left optimistic that the new U.S.-Mexico-Canada trade agreement has a good chance of being approved by the House and Senate.

“Now it’s time to vote,” he said. “I look for the White House to submit this [soon], and you can rest assured ATA and its members will be up there pounding marble to get this done.”

He also is pleased that the Federal Motor Carrier Safety Administration in August issued its long-awaited notice of proposed rulemaking concerning changes to its hours-of-service rules for drivers.

“We have the rule — it’s been out,” he said. “We have been evaluating it with our membership, looking at the five segments that have been identified in the rule. At MCE, our Safety Policy Committee, our Executive Committee and our board will be voting on our positions that will be submitted into the Federal Register prior to that rule closing.”

Spear added, “I expect the agency will move very quickly. This is a high priority. I do firmly believe that the provisions — many of them in this rulemaking — will provide true flexibility.”

Still, he predicts that the debate over HOS reform isn’t over, and expects safety advocates to put up a fight.

“There is nothing in this space today that ain’t going to court. It’s going to court,” he said. “It’s making certain the rule they propose — once it’s finalized — each change is based on very, very sound data. Not emotion, not rhetoric.”

In fact, Spear defended FMCSA’s deliberate process in proposing the changes. “It’s extraordinarily important we get it right during the rulemaking process, so when it goes to court, it can withstand that challenge,” he said.