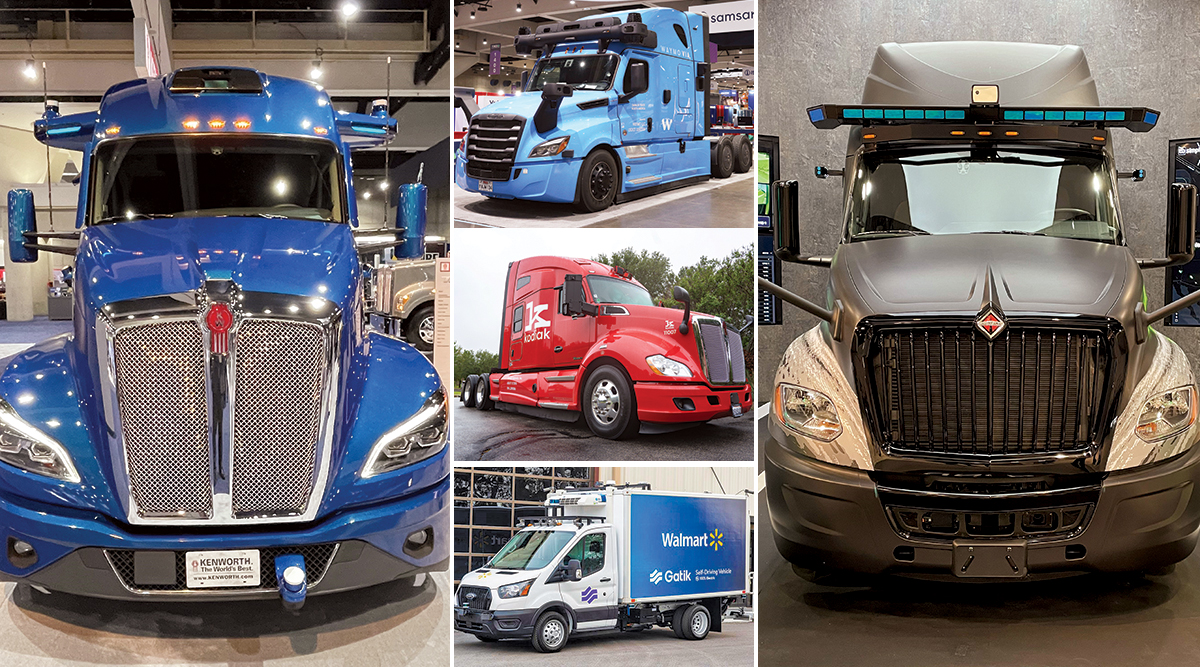 [Attend our upcoming virtual event with sessions dedicated to issues in technology, innovation and operations: Register for Automate!]

The process of developing, validating and ultimately commercializing fully autonomous trucks has proven to be a long and arduous journey, but there is no shortage of software developers and technologists dedicated to accomplishing that mission.

More than a dozen technology companies and startups are actively working to solve the myriad technical and business challenges associated with bringing self-driving trucks to market and widely deploying them in the trucking industry.

While a few of these companies, such as Waymo and Torc Robotics, have been working on autonomous vehicle technology for well over a decade, the majority are startup firms founded 4-7 years ago. Newcomers such as Waabi continue to enter the space as well.

Click the links to jump to profiles of autonomous companies below.

Automated vehicle consultant Richard Bishop said autonomous truck development has advanced significantly since it first became a prominent topic among industry leaders in the middle of the past decade.

“It was this wild and crazy new idea back in 2015,” said Bishop, principal at Bishop Consulting. “Looking over these last seven years, the [autonomous] truck industry has matured a lot.”

Development work has extended well beyond the initial trials focused on proving the feasibility of the technology, he said. In recent years, technology developers and their motor carrier and shipper partners have moved on to the details of how autonomous trucks could fit into their real-­world operations, including vehicle maintenance and interactions with law enforcement. 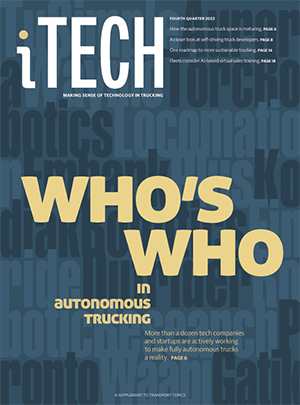 Along the way, some very large freight transportation companies have been gaining firsthand experience with the technology through pilot programs.

Autonomous truck companies have been conducting on-road tests and pilots concentrated primarily in the Sun Belt, especially in Texas, Arizona and New Mexico. At this stage, these test vehicles operate with a safety driver behind the wheel and an operations specialist in the passenger seat.

“I think there are trucking companies that have done a sufficient amount of testing to where they’re ready when the tech is ready,” Bishop said.

Those eventual deployments will depend not only on the readiness of technology developers’ self-driving software, but also the availability of autonomous-ready tractors rolling out of truck makers’ factories in significant quantities.

Some autonomous vehicle developers have formed partnerships with truck manufacturers to integrate their self-driving technology with truck platforms equipped with redundant systems and components to support full autonomy.

For some business cases, the commercial launch of autonomous trucks has already begun.

In August 2021, autonomous trucking firm Gatik began fully driverless operations on a shorthaul delivery route for Walmart, moving freight on public roads in Bentonville, Ark., between a logistics site and a store location with its fleet of self-driving, medium-duty box trucks.

“Commercialization has already started with the Gatik-­Walmart operation,” said Bishop, who is an adviser to ­Gatik and several other automated truck developers.

Over the years, the development of autonomous trucks has splintered into more narrowly defined and diverse use cases.

While the most common approach is automating hub-to-hub highway routes on major shipping lanes, some developers are focusing instead on automating shorthaul deliveries, deploying automated follower vehicles in truck convoys or enabling unmanned operations in logistics yards or industrial sites.

Initially, autonomous vehicle developers thought of this use case simply as “truck,” Bishop said. Then they started “slicing it up” into narrower segments to target more specific opportunities.

Bishop said leaders across a range of industrial operations have become much more open to the notion of autonomous vehicles.

“This idea of automating your equipment as an option has really sunk some roots down,” Bishop said. “Folks pretty much anywhere in the industrial space — whether you’re running on-road or doing something else with vehicles — have started thinking about the operational advantages.”

RoadSigns � RS97: Inside the List: How TT�s Top Global Freight Companies Are Preparing for an Uncertain Future

“Autonomy is a marathon. It is not a sprint,” he said. “It is going to deploy at a very measured pace over defined lanes, defined scenarios with certain fleets where the autonomous model can integrate with their operations.”

Kenworth and its sister company Peterbilt Motors Co. have partnered with Aurora on autonomous truck development.

Self-driving truck developers and the fleets testing the technology typically describe autonomous trucks not as a means to replace professional truck drivers, but as a way to complement their labor and potentially improve their jobs.

That, in turn, could benefit drivers by gradually shifting jobs toward more desirable local and regional routes that provide more home time, he said.

Most self-driving truck firms are targeting SAE Level 4 automation, where the vehicle can operate autonomously without relying on a driver for backup.

But some developers are focusing initially on introducing Level 2 driver-assistance systems that automate driving but still require an attentive driver behind the wheel to supervise the technology.

Locomation, for one, is pursuing what it calls “human-­guided autonomy.”

The company’s Autonomous Relay Convoy system electronically links a pair of trucks to form an automated convoy. The driver of the lead truck guides the convoy while the second truck follows autonomously, which could enable the driver in that vehicle to go off duty and rest. Further in the future, that follower truck could become unmanned while a human driver continues to pilot the lead truck.

Another developer, Plus, aims to pave the way for fully autonomous trucking by starting with a “driver-in” automated driving system that automated acceleration, braking and steering, but still requires the driver to remain attentive and engaged.

“We see this really as a new product category, which we call highly automated driving,” said Shawn Kerrigan, Plus co-founder and chief operating officer.

That initial product, called PlusDrive, is not merely a stepping stone to full autonomy.

“This driver-in product will always be an important part of our overall product offering,” Kerrigan said. “If you think about the evolution of the Level 4 market, it will start out small in certain segments, while this is a product that applies very broadly.”

Some companies that set out to bring autonomous driving technology to the trucking industry have since exited the business.

Prior to that, Uber ATG acquired self-driving truck startup Otto in 2016. A couple months later that business gained widespread attention by autonomously hauling a load of beer for Anheuser-Busch in Colorado.

Another departure is Starsky Robotics, which closed its doors in 2020. The company had been working to combine automated driving capabilities with teleoperations, in which remote drivers monitor the automated trucks from afar and take control when necessary.

In late 2020, self-driving truck startup Ike was acquired by Nuro, which is focusing on unmanned local delivery vehicles rather than heavy-duty trucks. 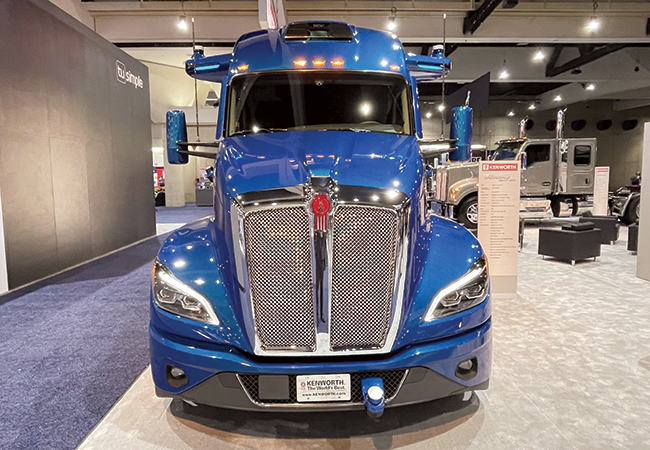 Aurora Innovation is developing a Level 4 self-driving system designed to automate the longhaul segments of truckload and less-than-truckload hauls. The company is establishing a terminal-to-terminal freight network for the launch of its Aurora Horizon driver-as-a-service business for trucking. 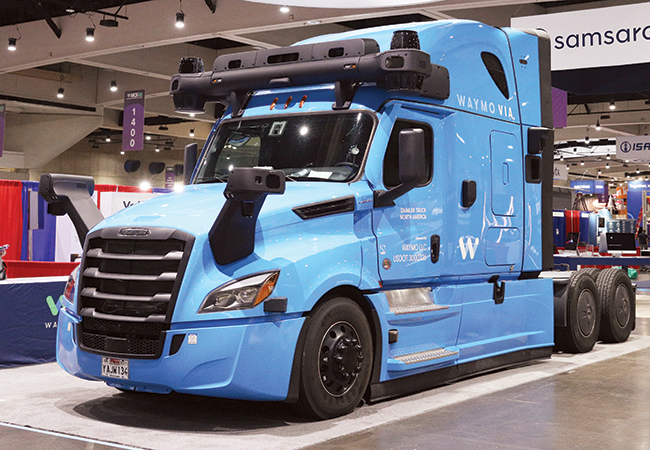 On the passenger car side, the company’s Waymo One ride-hailing business is already offering fully autonomous rides in suburban Phoenix and is testing the service in San Francisco.

Website: waymo.com
Founded: 2009 as the Google Self Driving Car Project; in 2016 the business was renamed Waymo and organized as a subsidiary of Google parent Alphabet Inc.
Executives: 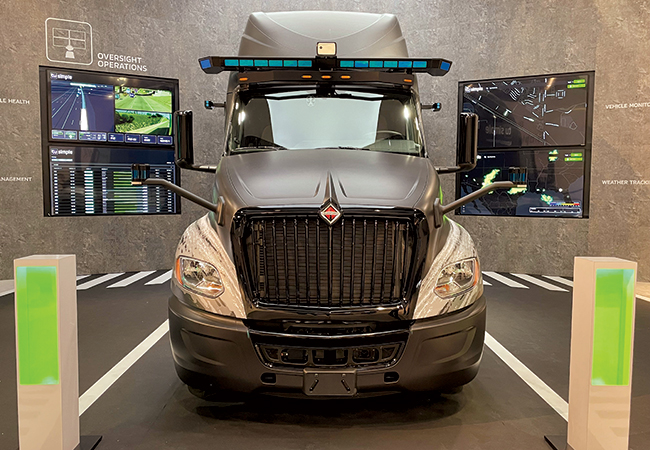 TuSimple is developing Level 4 automated driving technology with the goal of enabling unmanned Class 8 tractors to haul freight on a network of interstate routes across the United States, beginning in the Sun Belt.

In December 2021, TuSimple operated an autonomous truck on public roads in Arizona without a human on board during a milestone “driver-out” demonstration run. 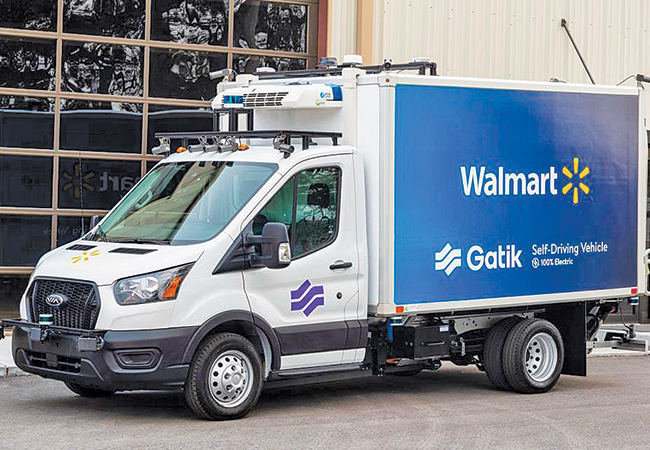 Gatik is commercializing Level 4 self-driving technology for light- and medium-duty trucks in short-haul operations. The company’s automated vehicles transport goods from fulfillment centers to pickup points such as retail stores and distribution centers.

In August 2021, Gatik began fully driverless operations on a shorthaul delivery route for Walmart on public roads in Bentonville, Ark. 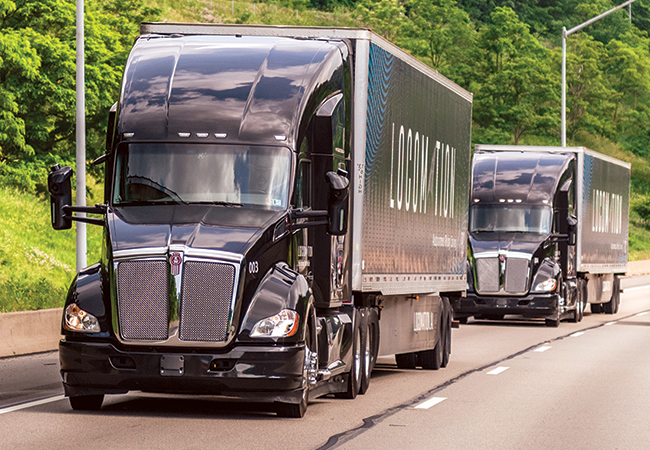 Locomation’s Autonomous Relay Convoy system electronically links a pair of trucks to form an automated convoy. The driver of the lead truck guides the convoy while the second truck follows autonomously, which could enable the driver in that vehicle to go off duty and rest.

From there, the company sees human-driven trucks leading unmanned follower trucks as the next progression for its technology. 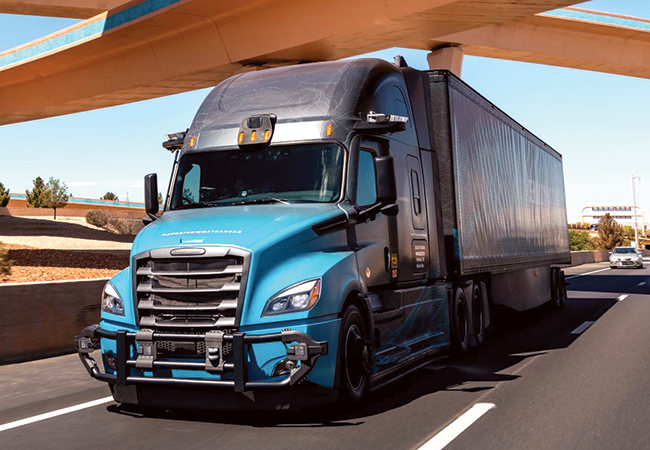 Torc is an independent subsidiary of Daimler Truck, which acquired a majority stake in the company in 2019.

The company has been refining its self-driving system, the Waabi Driver, through an “AI-first” approach designed to improve its flexibility and adaptability.

Waabi has been using its simulator technology to front-load the development of its self-driving system and minimize the need for on-road testing. 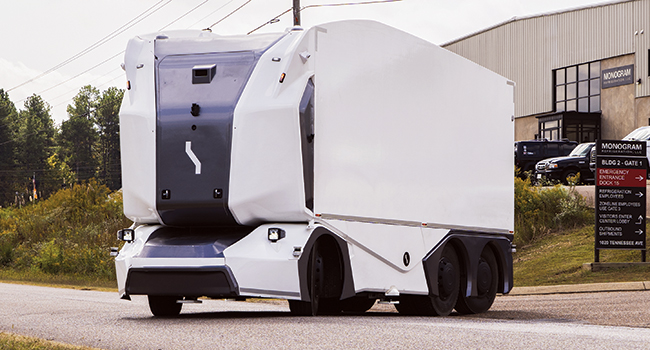 Einride has developed cabless, autonomous, electric-powered vehicles designed to haul cargo within industrial sites and on public roads. The unmanned vehicles, which have no driver’s seat, steering wheel or pedals, are monitored by remote operators.

The company recently completed a two-week, unmanned pilot with GE Appliances on public roads in Selmer, Tenn., moving goods between a manufacturing facility and a warehouse. 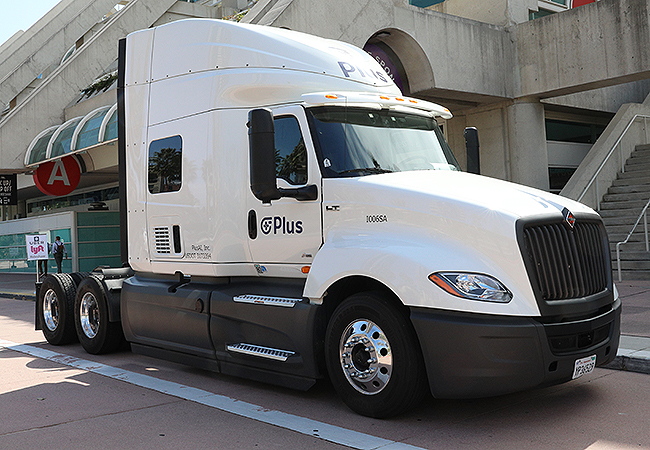 Plus has introduced a Level 2 automated driving product that enables “supervised autonomy.” This “driver-in” system, called PlusDrive, automates acceleration, braking and steering during highway driving, but still requires the driver to remain attentive and engaged.

Plus said the on-road experience and data gathered through that initial product offering will help pave the way for it to introduce Level 4 autonomous driving capabilities. 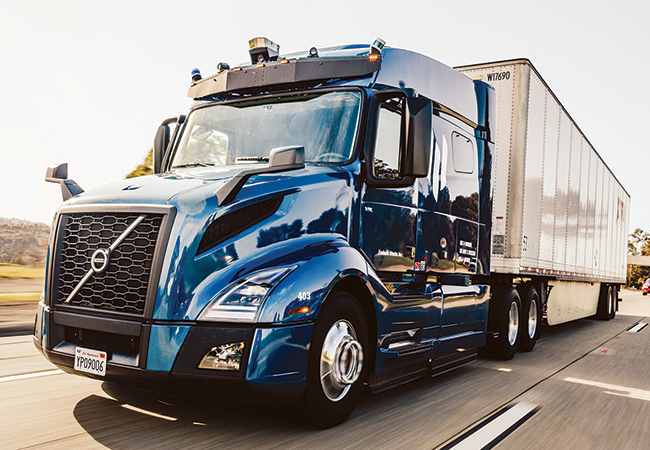 Embark has designed its autonomous driving system and components to be compatible with Class 8 truck models built by Freightliner, International, Peterbilt and Volvo Trucks. 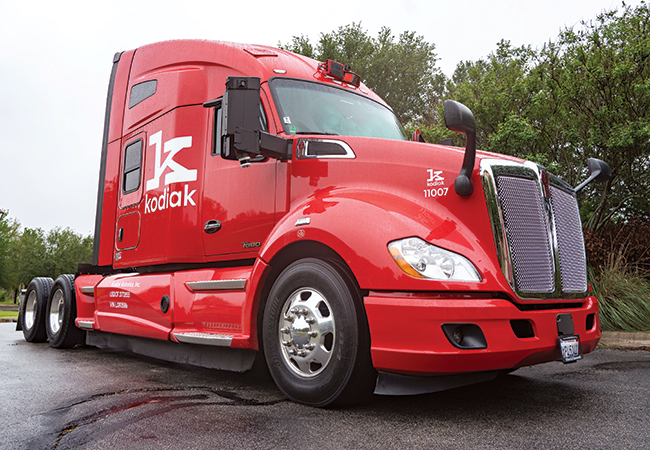 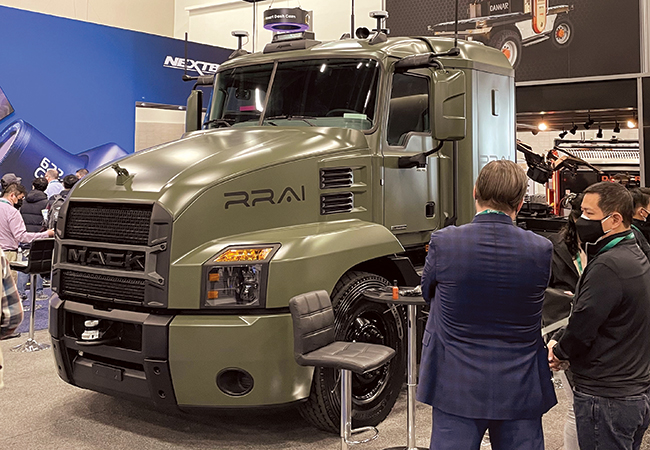 RRAI, the commercial division of Robotic Research, has developed autonomous driving and driver-assist technology for on-road and off-road vehicles.

Building on its work on automated military vehicles for the U.S. Department of Defense, the company has applied its self-driving system, AutoDrive, to heavy-duty trucks, terminal tractors and transit buses. Use cases for RRAI’s automated Class 8 truck technology include highway transportation, yard moves and rugged-terrain applications such as mining, logging and construction. 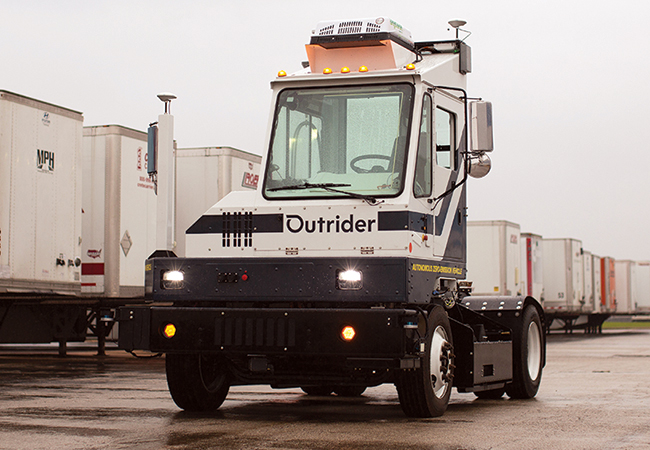 The company converts electric yard trucks into autonomous vehicles that maneuver between dock doors and parking spots, robotically hitch to and unhitch from trailers and can back trailers into tight spaces.