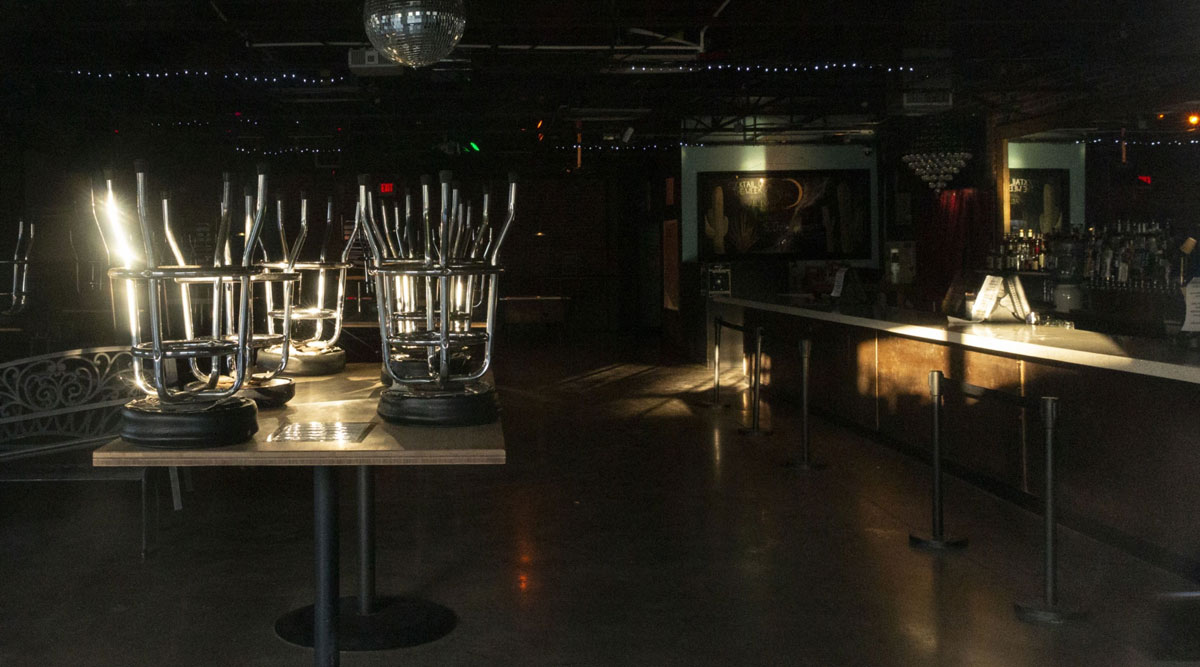 Stools are stored on top of a table at a bar temporarily closed in Arizona on June 30. (Cheney Orr/Bloomberg News)

The White House wants Congress to pass another stimulus package by the first week in August, before lawmakers head home for their annual summer recess, and to keep the cost at $1 trillion or less, according to Vice President Mike Pence’s top aide.

“I think we want to make sure that people that are still unemployed or hurting are protected but at the same time, we want to take into consideration the fact the economy is bouncing back and want to try to contain the amount of spending,” Marc Short, Pence’s chief of staff, said July 7 in an interview with Bloomberg Radio.

“There’s obviously been a lot of stimulus put in the system over the last couple bills, and so the price tag for us would be that.”

The White House and lawmakers are set to intensify talks on a new package of virus-related stimulus this month, after they return to Washington from their Independence Day holiday break. Trump administration officials have eyed a $1 trillion spending cap since at least early June, Bloomberg News reported last month.

The House is scheduled to begin its recess by Aug. 3, with the Senate following a week later. Senate Majority Leader Mitch McConnell has said he wants Congress to complete work on the next phase of stimulus by then.

“By that time table, we want to have a bill on the president’s desk,” Short said.

President Donald Trump and senior White House officials have said a payroll tax cut, liability reform, tax incentives for businesses to adapt to the pandemic and a potential back-to-work bonus are priorities for the administration.

Short said the White House views liability protections as “essential” for companies to bring workers back and fully reopen the economy.

The administration wants to be sure it’s “striking the right balance between income replacement on the one hand, and ensuring that we don’t have excessively high implicit tax rates on the return to work, on the other hand,” Tyler Goodspeed, acting chairman of the president’s Council of Economic Advisers, said in a separate interview with Bloomberg Radio.

Implicit tax rates can’t exceed 100%, he said, meaning it can’t be more lucrative for workers to stay at home. But any plan will require “not allowing a big blow to household income,” which is core to the economy, Goodspeed added.

Ohio Republican Brad Wenstrup, a member of the House’s tax-writing committee, said the package should address the ability of working parents to find child care and helping schools to reopen.

“We have a shortage of day care providers,” he said in another Bloomberg Radio interview. “I am going to look for incentives for those type of programs.”

Congress in March passed a $2.2 trillion pandemic relief program, with carve-outs for small businesses and the airline industry as well as multiple lending programs for corporations and Main Street businesses through the Federal Reserve. Treasury Secretary Steven Mnuchin sent out nearly $1 trillion in the first month after that bill became law, through checks directly to American families, forgivable loans to companies and unemployment insurance.

Still, much of that money remains unused. The Treasury Department has yet to disburse any loans from a $25 billion pool for airlines, and most of a $17 billion carve-out for firms deemed critical to national security remains untapped.