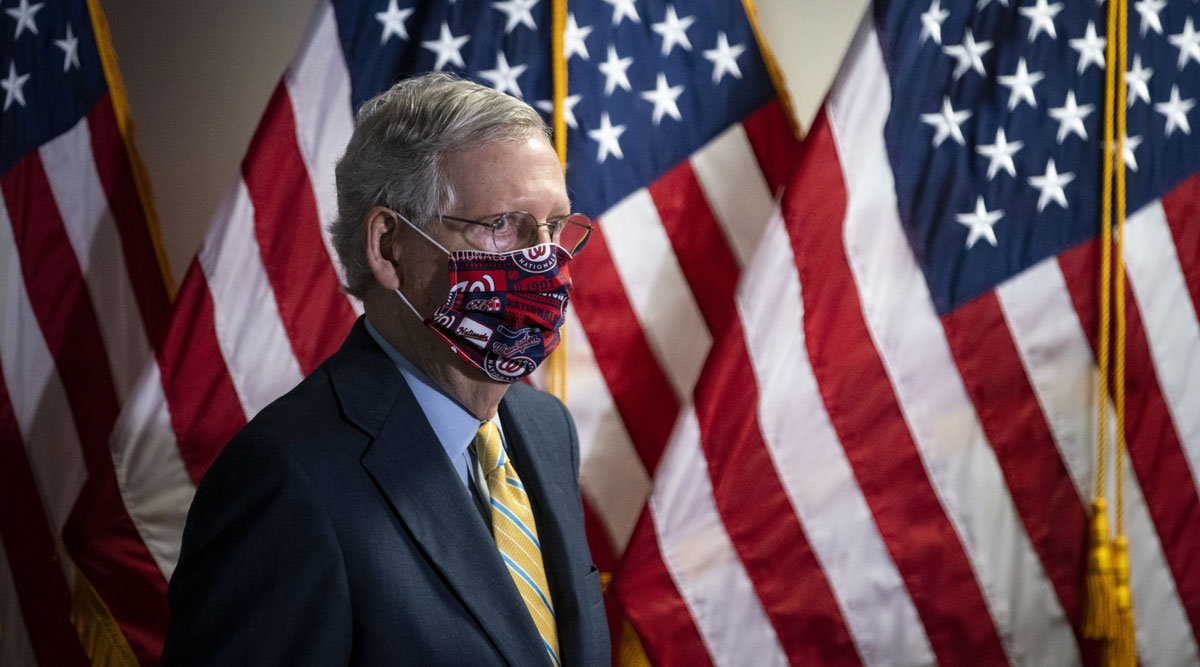 McConnell said July 6 that he expected the Senate to introduce a new virus stimulus bill in the coming weeks. (Al Drago/Bloomberg News)

Senate Majority Leader Mitch McConnell predicted Congress will pass one final coronavirus rescue package later this month and appealed to everyone in public life to urge people to wear masks to control the spread.

“This is not over. We are seeing a resurgence in a lot of states,” McConnell said at one of three press conferences he held July 6 in Kentucky. “I think the country needs one last boost.”

McConnell said he’s “pretty sure” that a bill will come together in the next couple of weeks. He said it will be crafted in his office with consultation from the administration and then negotiated with Democrats, who endorsed a $3.5 trillion package approved by the House in May. Senate Republicans have dismissed that plan and are discussing a package of as much as $1 trillion in total spending.

Whatever the final number, McConnell said it will be harder to get the unanimous Senate support that accompanied the last bill, the $2.2 trillion Cares Act. “The atmosphere has become a bit more political than it was in March,” he said.

McConnell reiterated his insistence that the bill must include liability protections for businesses, schools and others that reopen. He said more broadly that he was focused on measures that would help reopen schools, and boost jobs and health care.

That could include additional payments to individuals, McConnell said. He added that the people hit the hardest make about $40,000 or less and work in the hospitality industry.

He said lawmakers will be looking at additional state and local aid, but cautioned that the soaring federal debt is a reason the next bill must be the last one.

On masks and the virus generally, McConnell’s tone differed sharply from President Donald Trump, who has avoided wearing masks in public and has repeatedly tried to minimize the pandemic.

“Look, the single most important thing each of us can do to not only help ourselves but protect our friends and neighbors and everyone around us is not complicated — to wear a mask,” McConnell said. “It ain’t confusing. It’s really simple.”

While McConnell didn’t back a national mask mandate, he said everyone in public life should set an example by wearing masks and urging people to wear them.

“Clearly a lot of people thought when we started opening up the economy again, let the good times roll,” he said. Still, he added, “We can’t shut the economy down again.”

White House Press Secretary Kayleigh McEnany was asked at her July 6 press briefing about Republican lawmakers’ statements that the most important thing Americans can do is to wear a mask in public.

“The president was very clear last week if he were in a situation where he wasn’t tested daily and he was in close proximity and unable to social distance, he would wear a mask,” she said. Trump, who plans an outdoor rally in New Hampshire on July 11, has made clear that “masks are not only handed out but they are recommended,” McEnany said.

Asked about his face-off in November’s election against Democrat Amy McGrath, McConnell noted he is the only congressional leader not from California or New York and said “the fundamental question” for voters is whether they want a senator who will help Kentucky “punch above its weight” or one whose first vote “will be to make Chuck Schumer majority leader.”