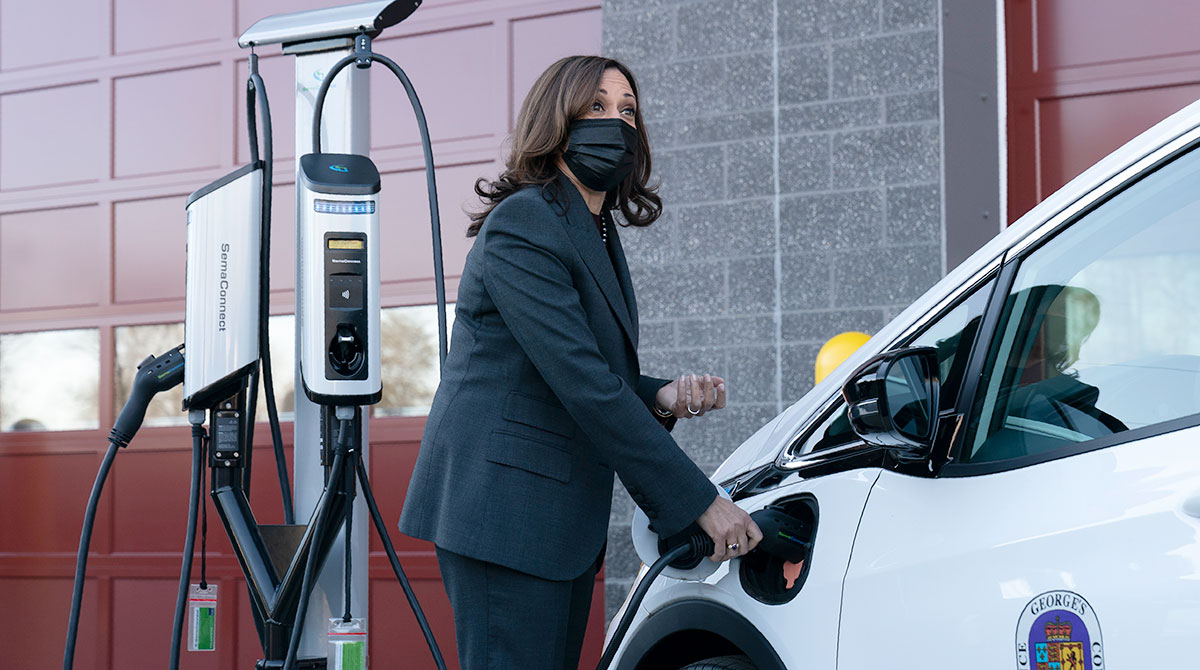 Vice President Kamala Harris charges an electric vehicle in one of the charging stations during her tour of the Brandywine Maintenance Facility in Prince George’s County, Md. (Manuel Balce Ceneta/Associated Press)

The Biden administration on Dec. 13 released a federal strategy to build 500,000 charging stations for electric vehicles across the country and bring down the cost of electric cars with the goal of transforming the U.S. auto industry.

“The future of transportation in our nation and around the world is electric,’’ Vice President Kamala Harris said at an EV charging facility in suburban Maryland.

The $1 trillion infrastructure law President Joe Biden signed last month authorizes a nationwide network of charging stations and sets aside $5 billion for states to build them, including $63 million for Maryland. The law also provides an additional $2.5 billion for local grants to support charging stations in rural areas and in disadvantaged communities.

Biden’s $2 trillion social and environmental policy bill, now pending in the Senate, includes a $7,500 tax credit to lower the cost of electric vehicles.

The future is electric.

Harris visited a maintenance facility in Brandywine, just outside Washington, where she received a demonstration of how chargers work and learned about a plan to electrify the government fleet in Maryland’s Prince George’s County.

The new EV charging strategy establishes a joint electric vehicles office between the federal Energy and Transportation departments; issues guidance and standards for states; and ensures consultations with manufacturers, state and local governments, environmental justice and civil rights groups, tribes and others, the White House said.

The two departments also will launch an advisory committee on electric vehicles that officials hope will be up and running early next year.

The effort also is intended to help the U.S. leapfrog China in the plug-in EV market. Currently, the U.S. market share of plug-in electric vehicle sales is one-third the size of the Chinese EV market.

Biden has set a goal that electric cars and trucks account for half of new vehicles sold by 2030.

The LMC Automotive consulting firm expects U.S. sales of new fully electric vehicles to hit nearly 400,000 this year, almost double last year’s figure. EVs still make up only about 2.6% of sales, but the firm expects sales to grow to more than 730,000 next year and more than 2 million by 2025.

Even at 2 million, EV sales still would be only about 12% of U.S. new vehicle sales.

Republicans, including some who voted in favor of the new infrastructure law, have criticized Biden for being preoccupied with electric vehicle technology when Americans are contending with a spike in gasoline and natural gas prices.

Biden last month ordered a record 50 million barrels of oil released from America’s strategic reserve, in coordination with other major energy-consuming nations. Gas prices have fallen in recent weeks as fears grow of another possible economic slowdown from the ongoing coronavirus pandemic.

Average prices Dec. 12 were $3.33 per gallon, according to the American Automobile Association, down about 7 cents from late last month.

Peak Internal Combustion Engine May Already Be Years in the Past