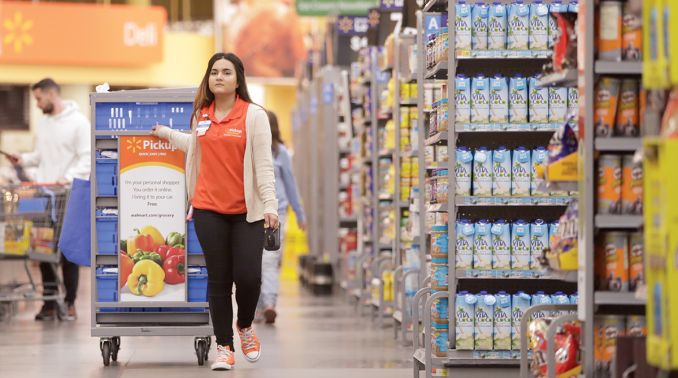 Walmart Inc. is approaching the crucial holiday season on a high note, posting solid third-quarter sales and raising its full-year outlook again, showcasing its resilience in the face of Amazon.com’s advances. Shares rose.

Comparable sales excluding gas for Walmart stores in the U.S. rose 3.2% in the period, beating analysts’ 3.1% growth estimate and marking the 21st straight gain. Both the number of customers and the size of their average orders were up, fueling the growth.

“It was a really good third quarter,” Chief Financial Officer Brett Biggs said in an interview, adding that he’s “pleased” with how shoppers are responding so far to the rollout of early holiday deals. Walmart now sees full-year adjusted earnings per share increasing slightly compared with last year, after saying in August either a slight decrease or slight increase was possible.

This is the second time this year Walmart has upgraded its outlook. The rosier view contrasts with more downbeat expectations from retailers such as Macy’s Inc., which slashed its profit guidance in August. Earlier this month, Moody’s cut its expectations for the entire U.S. retail sector, citing “intense competition in the fight for market share.” Walmart, buoyed by its market-leading grocery business and big investments to improve e-commerce, has largely avoided the turmoil that’s afflicted many mainstream merchants over the past two years.

“Walmart continues to position itself near the very top of global retail by any measure, and will continue to get stronger as time goes on, increasing the pressure on the rest of global retail,” Charlie O’Shea, an analyst at Moody’s, said in a note.

Walmart’s web sales in the U.S. rose 41%, ahead of its expected growth rate for the full year. It has rapidly expanded its online grocery service and in recent weeks debuted a new offering in three cities where employees put the food right into customers’ fridges. Profitability has been a concern on the dot-com side, though, and Biggs said in prepared remarks that the company needs to sell more general merchandise, which delivers better margins than bread and bananas.

Sam’s Club, the company’s warehouse division that accounts for about 11% of its revenue, was one weaker spot. Comparable sales there rose only 0.6%, just one-third the pace analysts surveyed by Consensus Metrix had been expecting. A drop in tobacco sales negatively hit sales by 350 basis points, it said. The chain is still without a leader a month after Sam’s CEO John Furner was tapped to replace Greg Foran as head of Walmart’s U.S. stores division. Biggs provided no update on the search Nov. 14.

Walmart Inc. ranks No. 4 on the Transport Topics Top 100 list of the largest private carriers in North America.