Fleets Heed Call to Service for a Region in Distress 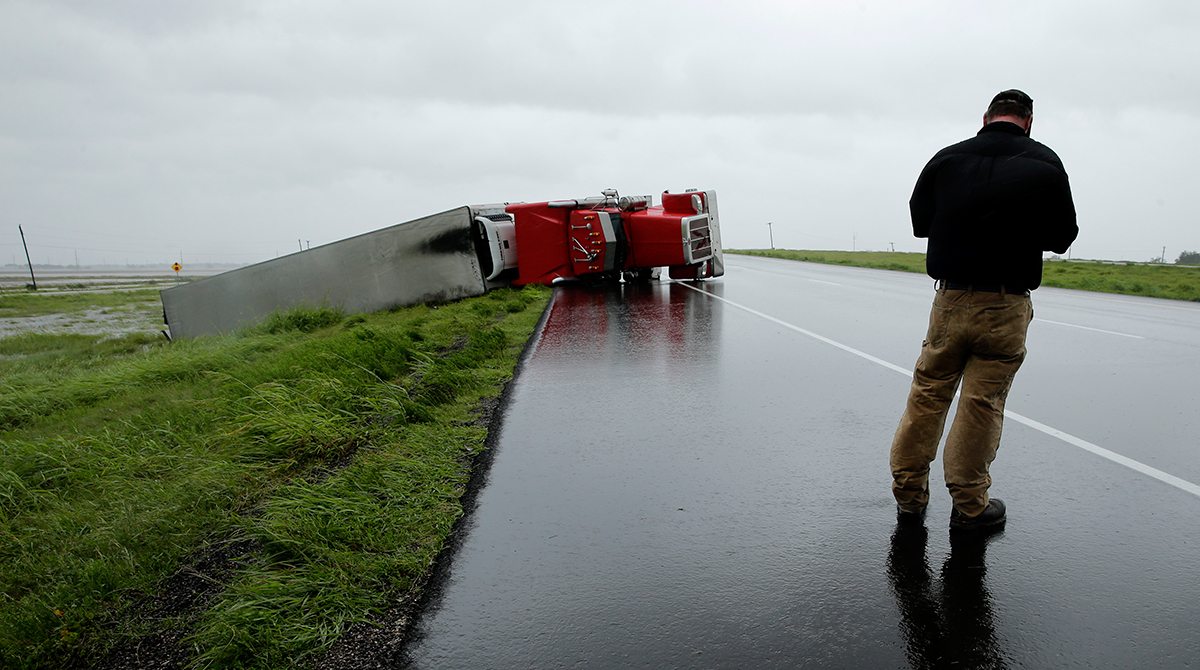 Even while Hurricane Harvey lashed Houston, dropping the most rain in the history of the continental United States, trucking companies navigated whatever roads were available for rescue and supply missions in response to the Texas Trucking Association’s call for volunteers.

Harvey initially came ashore as a Category 4 hurricane on Aug. 25, dropping 52 inches of rain over five days and submerging much of the city, including its freight routes.

Raquelle Lewis, spokeswoman for the Texas Department of Transportation’s Houston office, said most of the city’s highway system faced intermittent flooding. The city’s major freight routes include interstates 10, 45, 69 and 610.

“The roads are, in many places, impassable,” Lewis said.

The floodwaters washed out many roads, making it necessary to get around by boat.

The Houston-based company was one of several hauling rescue supplies across the city Aug. 28. It took a flatbed truck laden with seven johnboats, seven motors and a swathe of life jackets from a boat vendor about 20 miles outside Houston to an outdoor sporting goods store closer to the heart of the city. The U.S. National Guard was waiting for the boats, Jetco spokeswoman Lisa Sursavage said, citing 186 pending rescues.

Anybody who’s not dealing with their own safety concerns locally has definitely been responsive.

To make the delivery, the Jetco team traveled down Beltway 8, a state highway that loops around the outer perimeter of the city. Sursavage said that this was the normal route Jetco would take if it were making this delivery when a flash-flood warning was not in effect. She described it as a “ghost town.”

Jetco is one of the companies on Texas Trucking Association President John Esparza’s “rifle-shot” list, which includes members who are on standby in case they are needed to deliver supplies.

Esparza said he constantly sends alerts and updates to the association’s members.

“Anybody who’s not dealing with their own safety concerns locally has definitely been responsive,” Esparza said.

UPS ranks No. 1 and  FedEx is No. 2 on the Transport Topics Top 100 list of for-hire carriers in North America, and each has pledged $1 million to support recovery in Texas and Louisiana, Harvey’s next stop.

UPS said its pledge is a combination of cash grants, in-kind transportation movements and technical expertise.

“FedEx will continue to work closely with humanitarian and disaster relief organizations to provide support and deliver supplies to assist those hardest hit by the storm,” David J. Bronczek, president and chief operating officer, said Aug. 29.

Raider Express, a family owned and operated company in Fort Worth, Texas, also is supplying aid.

Michael Eggleton, the company’s vice president, said he is preparing three trailers full of hygiene supplies, water and pet food to travel to Houston on Aug. 31.

Raider Express also is participating in the relief effort led by the NFL’s Houston Texans defensive end J.J. Watt. By midday Aug. 31, Watt’s fund-raising had generated more than $10 million, according to ESPN.com.

Also, the Texas Department of Motor Vehicles announced that permits for oversize trucks will not be issued unless vehicles traveling into Harvey-effected areas are involved in relief efforts. The state classifies overweight semi-trailers as those that exceed 14 feet high; 8 feet, 6 inches wide; and 59 feet long.

Fleets from outside Texas also are contributing to relief efforts. Dave “Heavy D” Sparks, the truck-builder behind Discovery Channel’s “Diesel Brothers,” and his crew are taking five flatbeds loaded with amphibious units, rescue vehicles and supplies to Houston. Sparks’ company, Diesel Sellerz, produces specialty trucks and is based in Woods Cross, Utah.

“We just decided to get involved. Houston is a very big market for us,” Sparks said. “They supported our business for a long time. We’re just kind of returning the favor.”

“Right now, the major issue is pushing out information so that people know where impassable roads are,” Lewis said.