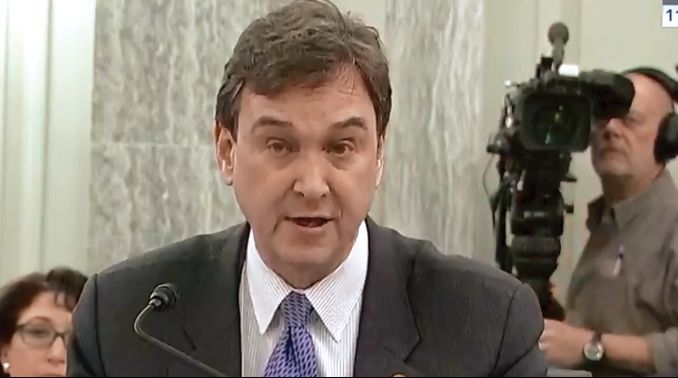 Joel Szabat testifies in March during a Senate hearing on the coronavirus pandemic. (C-SPAN)

Joel Szabat, who was nominated to the role of undersecretary of transportation for policy, told the Commerce Committee, “Longer authorizations provide more certainty to local governments and drive down construction costs.”

Szabat, who is fulfilling the undersecretary’s duties in an acting capacity, emphasized the administration would soon unveil a highway reauthorization proposal to help shape the debate in Congress.

He noted the president’s fiscal 2021 budget request had proposed a 10-year plan, which lacked a source of funding. Pertaining to the soon-to-be-insolvent Highway Trust Fund, the account used to assist states with construction and maintenance, documents accompanying the president’s budget request indicated, “Additional details on this account will be provided in the proposed surface transportation reauthorization proposal.”

On Capitol Hill, transportation leaders are considering legislation to update a 2015 highway law that expires in September. A Senate panel advanced a measure last year. A House committee intends to consider its version this month. Neither chamber has considered a sustainable funding fix for the Highway Trust Fund, which relies on dwindling revenue from the Clinton-era 18.4 cents-per-gallon gas tax and 24.4 cents-per-gallon diesel tax.

At the Senate hearing, Szabat touched on other policy points. He reminded senators of the department’s advocacy to preserve the 5.9 GHz spectrum band to allow for the emergence of new technologies. The Federal Communications Commission’s proposal regarding the 5.9 GHz band rules would designate the lower 45 MHz of the band for unlicensed uses.

Szabat also indicated DOT’s next iteration of autonomous vehicle federal guidance would be released by the end of the year. The department released in January an update of autonomous vehicle technology guidelines meant to unify sets of principles across 38 federal departments, agencies, commissions and executive offices, and offer guidance to state and local agencies, experts and industry stakeholders.

As part of the White House coronavirus task force this year, Szabat contributed input from the department meant to ensure public safety.

“Nobody yet knows what the ‘new normal’ will be, when the threat of the coronavirus recedes,” he said. “Changes in how we live and work will also drive changes in transportation.

“The office of the undersecretary oversees or coordinates the work of hundreds of outstanding research scientists, engineers, statisticians and economists. Some of them are already looking into what changes might emerge, so we are better prepared for them if they do.”

The Commerce Committee, which oversees freight policy, has yet to schedule a vote on his nomination.

At a recent congressional hearing, Szabat touted proposals aimed at improving freight and commuter connectivity along rural corridors. Last year, the department launched the Rural Opportunities to Use Transportation for Economic Success, or ROUTES, initiative to facilitate access across rural places, and enhance grant funding and loan programs, data sharing and transit service.

He was confirmed by the Senate in 2019 to the position of assistant secretary-aviation and international affairs. From 2011 to 2018, he was executive director of the Maritime Administration. Before that, he served as chief of staff at the Small Business Administration. In 2005, he led efforts to rebuild infrastructure in Iraq, according to background information released by the White House.