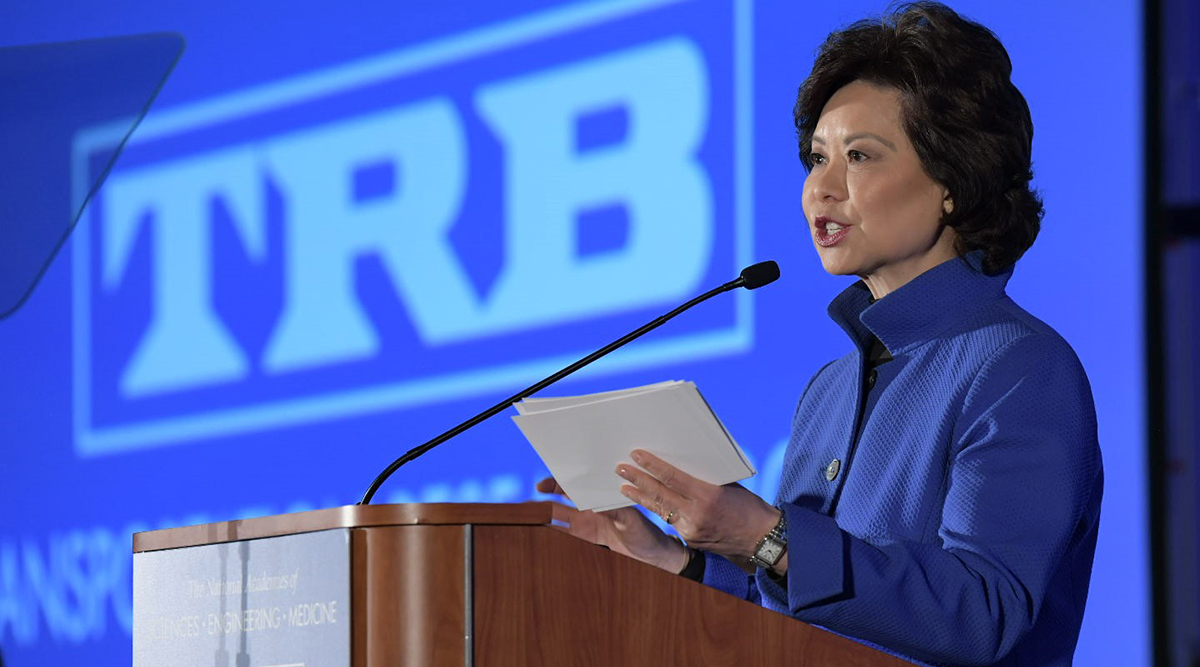 During her remarks at the Transportation Research Board’s annual meeting, Chao announced a new pilot program to deploy “vehicle-to-everything” (V2X) communication systems around the country to help prevent accidents involving first responders. She reported that there are about 46,000 crashes and 150 fatalities every year involving emergency response vehicles.

The First Responder Safety Technology Pilot Program will provide up to $38 million to equip emergency response vehicles, transit vehicles and related infrastructure, such as traffic signals and highway-rail grade crossings, with V2X technology.

Chao noted these systems will use the 5.9 GHz safety band of spectrum that’s allocated for use in transportation systems. The Federal Communications Commission voted unanimously Dec. 12 to proceed with a proposal that reassesses the 5.9 GHz band rules. This would mean designating the lower 45 MHz of the band for unlicensed uses, such as Wi-Fi, and dedicating the remaining 30 MHz for use by transportation and vehicle safety-related communication services. DOT has expressed concerns about the FCC’s proposal.

“We believe, as I know you do, that it is very important to retain this bandwidth for this purpose, and the department is actively advocating the FCC to do the same,” Chao said.

We want to make sure that drivers are aware that these systems are designed to ‘assist,’ not replace an engaged driver, which is still very important.

Additionally, DOT is endorsing a standardized list of recommended ADAS terminology called “Clearing the Confusion.” The list, a collaboration between the National Safety Council, AAA, Consumer Reports and the data analytics company J.D. Power, is based on ADAS system functionality.

“Currently, there is variance among manufacturers,” Chao said. “We want to make sure that drivers are aware that these systems are designed to ‘assist,’ not replace an engaged driver, which is still very important.”

Chao also announced a substantial expansion of the agency’s Partnership for Analytics Research in Traffic Safety, or PARTS, program. The program, a data-sharing partnership between government and private sector representatives to improve safety analysis, initially began as a way to study automatic emergency braking.

PARTS-2 will expand participation in the program to nearly 70% of the U.S. auto market and will enable data sharing to facilitate learning between private sector partners. The program will focus on gathering data about ADAS such as adaptive cruise control and lane-keeping assistance technology.

Chao stated that AV technology has the potential to save thousands of lives each year, noting that 94% of crashes are due to human error. She also said such technology could offer mobility options for people who face transportation challenges, such as the elderly and the disabled.

DOT announced Jan. 13 that $906 million has been made available for the Infrastructure for Rebuilding America (INFRA) grants, which support highway and bridge projects. Chao reminded listeners that the deadline for applications is Feb. 25.

Chao also reminded attendees that the public comment period on DOT’s Notice of Proposed Rulemaking on the remote identification of drones ends March 2. The proposed rule would apply to all drones that weigh more than .55 pounds that are required to be registered with FAA.

Chao commended the work of TRB, which turns 100 on Nov. 11, and the group’s continued partnership with federal officials.

“Working together, we can help to enable a future in which transportation innovations will increase safety, strengthen economic growth, improve quality of life and ensure that our country remains a global technology leader,” Chao said.