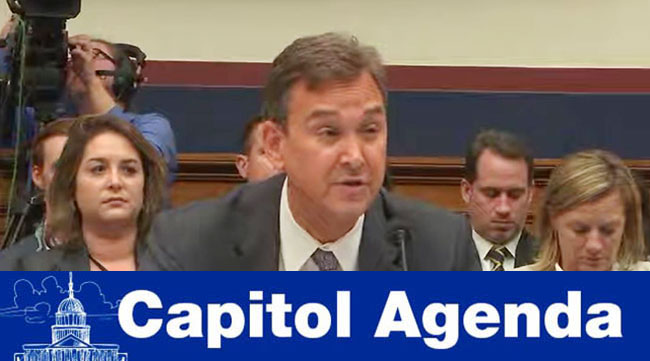 Joel Szabat, shown testifying at a House hearing in September, told a Senate panel March 4 fighting the coronavirus will require "the efforts of all levels of government." (House Transportation & Infrastructure Committee via YouTube)

Szabat, a member of the White House’s coronavirus task force, went on to explain the department is ensuring there is an active airbridge in place for Americans returning from affected areas. Also, DOT is ensuring airlines funnel passenger flights to domestic airports with the capability of screening passengers, and that air and sea cargo traffic between the United States and China continues.

Another priority is that protocols are in place to protect crews of aircraft traveling between the United States and foreign spots, as well as providing alerts about the coronavirus, he added.

“Successful containment and mitigation of the virus to keep the American people safe will depend on the efforts of all levels of government, the public health system, the transportation industry and our communities,” Szabat said in prepared remarks to a subcommittee that oversees aviation. “The ability to sustain transportation services, move emergency relief personnel and commodities, and mitigate adverse economic impacts requires effective transportation policy decisions.”

Szabat’s statement preceded President Donald Trump’s comments at the Centers for Disease Control and Prevention. Asked March 7 about the impact to the economy, the president indicated, “I like when people happen to stay in the United States and spend their money in the United States.”

Szabat by Transport Topics on Scribd

As of March 9, there were 35 states reporting cases of COVID-19, the disease occurring from the virus. Overall, CDC indicated there have been 423 cases of individuals with COVID-19, and 19 have died.

One of the individuals testing positive for the coronavirus is Rick Cotton, executive director of the Port Authority of New York and New Jersey. The agency oversees the George Washington Bridge, home to the country’s top truck bottleneck. Gov. Andrew Cuomo (D), who recently declared a state of emergency, explained to reporters on March 9, “He’s been at the airports, obviously, when many people were coming back with the virus.”

March 11, 10 a.m.: The Senate Commerce Committee scheduled a hearing on the nomination of Finch Fulton to become assistant Transportation Secretary for transportation policy.

And then there were two. Sen. Bernie Sanders (I-Vt.) and former Vice President Joe Biden have turned the Democratic presidential contest into a two-man race, though Rep. Tulsi Gabbard (D-Hawaii) is hanging on by a thread. On infrastructure, Sanders touts a climate change-centric approach to modernizing transportation corridors. The former vice president proposes undoing aspects of the tax bill Trump signed into law.

Here’s an idea: Coronavirus gets you to where you want to go on a robust infrastructure plan.

Sen. Ted Cruz (R-Texas), whose subcommittee held a hearing on the coronavirus March 4, and Rep. Paul Gosar (R-Ariz.) have self-quarantined due to exposure to an individual with the coronavirus.

Boston, where the average driver devotes nearly 150 hours annually stuck in traffic, ranked as the most congested city in the country, according to transportation analytics firm Inrix, Inc.

Perhaps the biggest non-presidential moment of the 2020 cycle is upon is.

And after months of saying he would not run, @GovernorBullock is poised to run against @SteveDaines

Dr. Anthony Fauci at the White House on March 2