US Unemployment Claims Fall to 779,000; Job Cuts Grind On 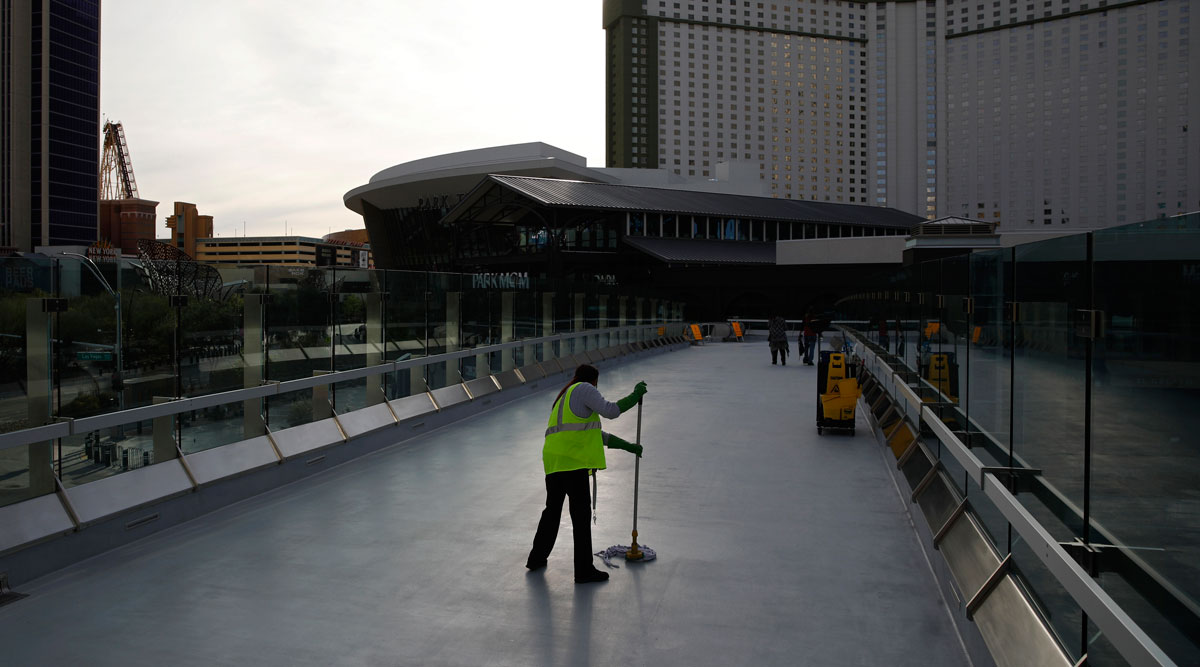 A worker cleans along the Las Vegas Strip in March 2020. (John Locher/Associated Press)

The number of Americans seeking unemployment benefits declined to 779,000 in the week ended Jan. 30, a still historically high total that shows that a sizable number of people keep losing jobs to the pandemic.

Georgia and Pennsylvania commented to the department that they had seen fewer layoffs in the transportation and warehousing sector.

The total jobless claims left the weekly figure at its lowest point in two months but nevertheless elevated: Before the virus erupted in the United States in March, weekly applications for jobless aid had never topped 700,000, even during the Great Recession.

The Feb. 4 report reflects a U.S. job market that still is suffering from the pandemic, with hiring having weakened for six straight months. It is a key reason why President Joe Biden is pushing Congress to enact a $1.9 trillion economic rescue program, on top of a $900 billion federal aid package that was approved late last year.

The decline in applications for unemployment aid over the past few weeks suggests that layoffs have eased slightly as several states have loosened restrictions on restaurants, bars and other service firms, causing these businesses to retain workers.

And the pace of new confirmed viral infections is slowing, a trend that has lowered hospitalizations across the country. Average daily reported cases have fallen 30% in the past week to about 140,000 — one-half the peak level of a month ago.

Even so, the persistence of elevated layoffs remains a concern, economists say.

“Total initial claims fell, but the magnitude is still a huge problem,” said AnnElizabeth Konkel, an economist for job-posting website Indeed.com. “We continue to see the effect of the coronavirus on the labor market. At no point has it let up.” 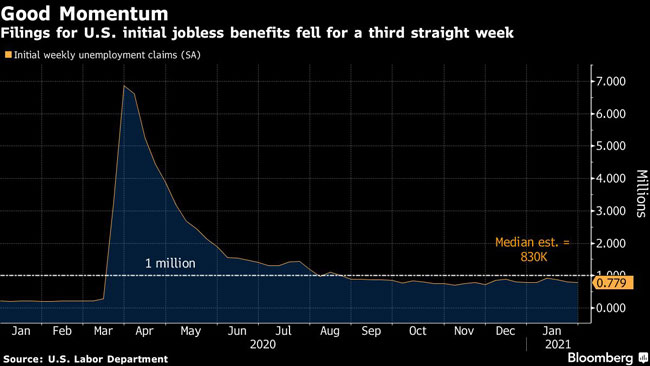 In January, applications for jobless benefits had accelerated, but that surge might have been driven up, at least in part, by laid-off workers reapplying for benefits after two federal extended programs expired late last year. Those programs were belatedly renewed Dec. 27, after former President Donald Trump signed the $900 billion stimulus package into law, one day after the programs had expired.

All told, 17.8 million people were receiving unemployment benefits in the week that ended Jan. 16, the latest period for which data are available. That’s down from 18.3 million from the week before.

Others have tried but failed to renew their benefits. One is Alfrieda Hylton, who has struggled for months to regain her unemployment aid, which ran out in September. She lives in Capitol Heights, Md., but received jobless aid from the District of Columbia, where she worked for 17 years as an administrator at Howard University and three other years at a law firm.

She said she was told by the district to apply for benefits in Virginia, where she worked most recently in a six-month temporary job. But Virginia has referred her requests for aid back to D.C. Hylton, 64, can’t get anyone on the phone in Virginia; its automated phone system typically hangs up after she goes through all its prompts.

“It’s been very frustrating,” she said. “I’ve exhausted my retirement money. If nothing happens soon, I’m going to be homeless.”

Amid the hardships for people such as Hylton and the generally dim picture of the economy, some hopeful signs have emerged this week. Auto sales rose solidly in January, and a gauge of business growth in the service sector picked up. So did spending on home construction.

That doesn’t mean a rebound is near in the job market, which typically lags recoveries in the broader economy. Employers have been hesitant to hire at a time when consumer spending has faltered.

The government’s jobs report for January, to be released on Feb. 5, is expected to show a modest hiring gain of perhaps 100,000, according to data provider FactSet. The unemployment rate is forecast to remain stuck at 6.7% for a third straight month.

An increase in hiring would represent a welcome improvement over December, when employers cut jobs for the first time since April. Yet with the economy still down nearly 10 million jobs from its level before March, a gain of that modest size would provide little benefit for most of the unemployed.

Once vaccinations become more widely distributed and administered in the coming months, economists expect growth and hiring to accelerate at a sustained clip, particularly if Congress provides significantly more aid to households, small businesses, and states and cities. Some analysts predict that under those circumstances, economic growth could surpass 6% for 2021.

Still, Americans are saving the bulk of the payments, Meyer said in a research note. That growing pool of savings could help fuel increased consumer spending once the pandemic is brought under control.

At the same time, small businesses struggled through most of January and likely held back overall hiring last month, according to Homebase, a provider of work scheduling systems to small firms. Homebase said the proportion of its clients that were closed, mostly because of government restrictions, rose from December to January, and the number of employees working declined.

Although last year’s financial support package extended federal unemployment programs and provided $300 in extra weekly jobless aid, many states have yet to distribute the money, according to a report this week from the Century Foundation. The report found that just 38 states were paying benefits under a federal extended aid program as of Jan. 30. Just 40 states were issuing checks under a separate jobless aid program for freelancers and the self-employed.