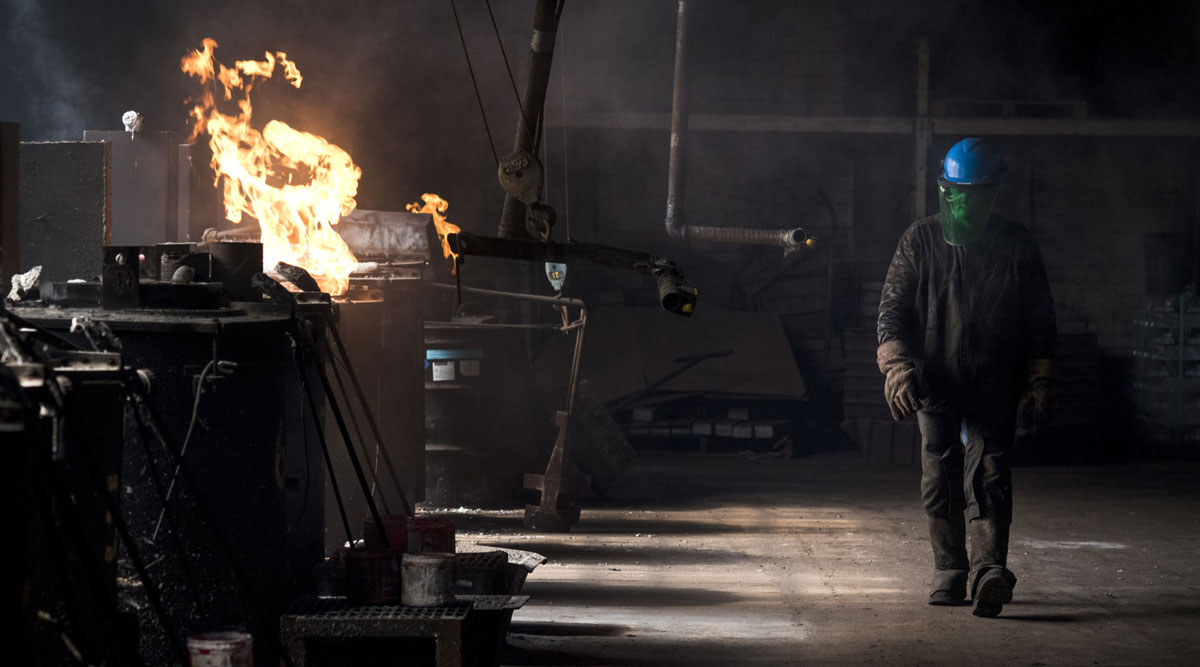 An employee walks by crucibles filled with molten magnesium and aluminum at a foundry in Ohio. (Ty Wright/Bloomberg News)

The U.S. economy downshifted in the final three months of 2020 after record third-quarter growth, as the pandemic battered the labor market and limited Americans’ ability and willingness to spend.

Gross domestic product expanded at a 4% annualized rate in the fourth quarter, according to a preliminary estimate released by the Commerce Department on Jan. 28. The median forecast in a Bloomberg survey of economists called for 4.2%.

While output of goods and services was far slower than the record 33.4% rate in the previous three months, the growth pace still exceeded the average of the decadelong expansion that ended early last year.

The deceleration in overall growth largely reflected a sudden moderation in consumer spending after a third-quarter splurge. Personal consumption, the biggest part of the economy, increased at a 2.5% rate, trailing projections for a 3.1% rise. Transportation services shrunk by 0.09% on an annualized rate.

Contracts on the S&P 500 pared losses after the morning data. The dollar pared gains, while the yield on the 10-year Treasury note rose. 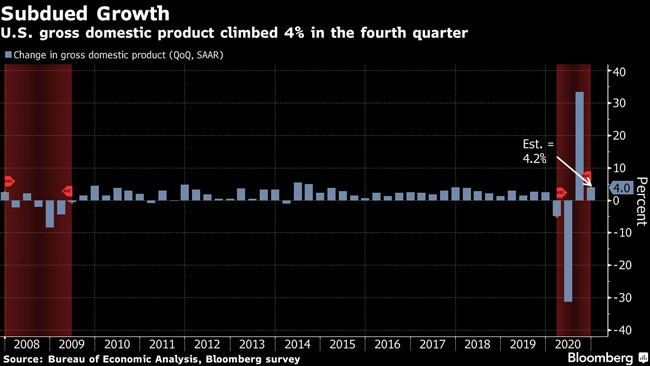 At the same time, other parts of the economy continued to shine. Nonresidential investment expanded at a 13.8% pace, driven by firm spending on equipment, while residential outlays grew 33.5%.

The latest figures highlight the dichotomy of the economic recovery. Households have grown more cautious about spending, most notably on service-related activities but also merchandise.

Yet, still-surprising momentum in home sales is powering construction, and companies continue to invest in equipment. That’s helping to sustain a manufacturing rebound at the same time factories boost output to replenish lean inventories.

Another reason fourth-quarter GDP missed estimates was a smaller boost from inventories. Still, that sets up for firmer production in coming months.

The smaller contribution from inventories “should boost expectations because business investment spending has continued to grow at a solid pace,” said Russell Price, senior economist at Ameriprise Financial Inc. “Consumer spending should certainly improve given the recent stimulus package passed at the end of December.”

The report marks the end of a tumultuous year. The global COVID-19 pandemic and government efforts to curb it sent the economy tumbling into recession in a matter of weeks. While continuing to make headway as the year drew to a close, real GDP still contracted 2.5% in 2020 from the prepandemic output peak in the fourth quarter of 2019.

The economy’s prospects this year have improved nonetheless. A $900 billion pandemic relief package was signed in late December that included both stimulus checks for millions of Americans and financial help for small businesses.

There are expectations for even more aid in the wake of a $1.9 trillion plan put forth by President Joe Biden. Lawmakers are split. Democrats see the growth slowdown and weakening job market as reason to move forward on a larger aid bill, while many Republicans prefer to wait and allow financial aid from the December bill to filter through the economy as coronavirus vaccinations increase.

The fourth quarter started on solid ground, but a resurgent pandemic quickly led to a reimposition of restrictions on businesses and activity in some states and cities in November and December. In that two-month period, employers in the leisure and hospitality sector cut hundreds of thousands of jobs — another black eye for an already struggling labor market — and retail sales declined.

The latest GDP figures help explain the Federal Reserve’s characterization of the economy. On Jan. 27, after leaving their benchmark interest rate near zero, officials said in a statement that the “pace of the recovery in economic activity and employment has moderated in recent months.”

There are some signs in high-frequency data that the economy is gaining some momentum in the new year as COVID-19 infections stabilize. Metrics such as mobility, restaurant bookings and spending have all seen some improvement.

Consumer spending may get a boost in the first quarter after the latest round of stimulus payments and supplemental jobless benefits. In the fourth quarter, disposable incomes decreased at an annualized 8.1% pace, but pandemic aid for Americans should help bolster savings and incomes.