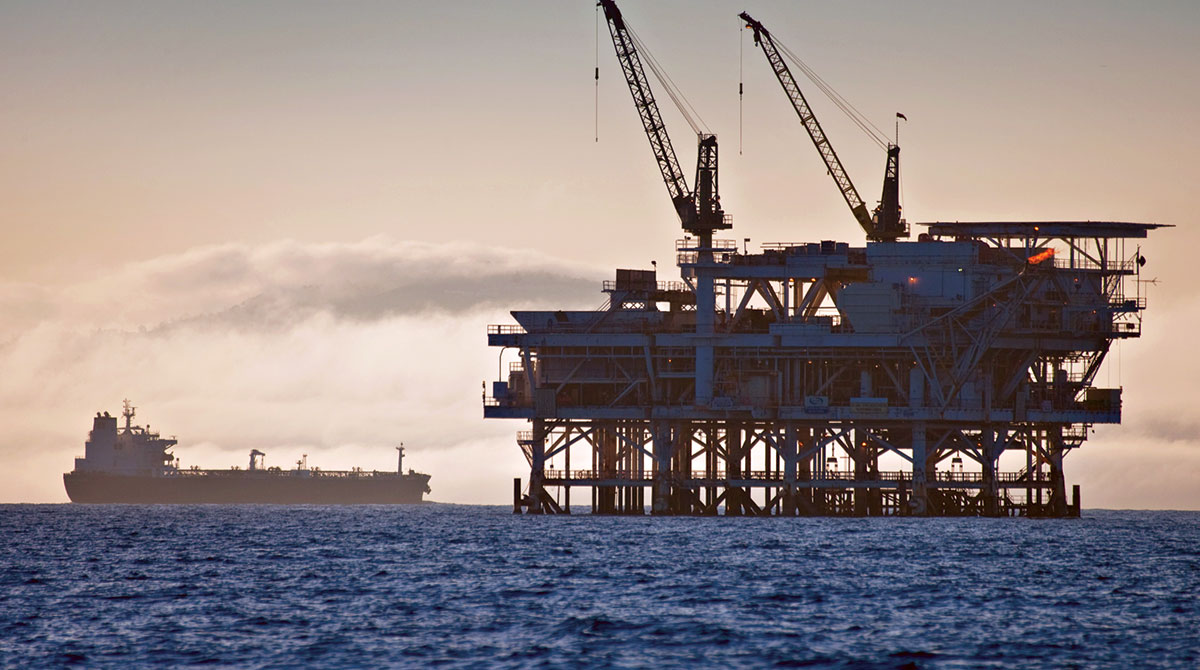 An oil tanker passes near an offshore oil and gas platform off the coast of Long Beach, Calif. (Tim Rue/Bloomberg News)

President Joe Biden on Nov. 23 ordered 50 million barrels of oil released from the nation’s strategic reserve to help bring down energy costs, in coordination with other major energy consuming nations, including China, India and the United Kingdom.

The move is aimed at global energy markets, but also at voters who are coping with higher inflation and rising prices ahead of Thanksgiving and winter holiday travel. Gas prices are at about $3.40 a gallon, more than 50% higher than their price a year ago, according to the American Automobile Association.

Administration officials said that reports of a possible release and consultations with other countries ahead of the announcement had caused oil prices to drop nearly 10% in anticipation of the news. The government will begin to move barrels into the market in mid- to late December.

There was no discernible impact on the price for a benchmark barrel of U.S. crude right after the announcement. Prices have been up and down all month, and were up less than 1% so far in this holiday shortened week.

Biden has scrambled to reshape much of his economic agenda around the issue of inflation, saying that his recently passed $1 trillion infrastructure package will reduce price pressures by making it more efficient and cheaper to transport goods.

Republican lawmakers have hammered the administration for inflation hitting a 31-year high in October. The consumer price index soared 6.2% from a year ago — the biggest 12-month jump since 1990.

“The three biggest drivers of the staggering 6.2% inflation rate we logged last month were housing, transportation and food,” the Kentucky senator said. “Those aren’t luxuries, they’re essentials, and they take up a much bigger share of families’ budgets from the middle class on down.”

The Strategic Petroleum Reserve is an emergency stockpile to preserve access to oil in case of natural disasters, national security issues and other events. Maintained by the Energy Department, the reserves are stored in caverns created in salt domes along the Texas and Louisiana Gulf Coasts. There are roughly 605 million barrels of sweet and sour petroleum in the reserve.

“As we come out of an unprecedented global economic shutdown, oil supply has not kept up with demand, forcing working families and businesses to pay the price,” Energy Secretary Jennifer Granholm said in a statement. “This action underscores the president’s commitment to using the tools available to bring down costs for working families and to continue our economic recovery.”

The Biden administration has argued that the reserve is the right tool to help ease the supply problem. Americans used an average of 20.7 million barrels a day during September, according to the Energy Information Administration. That means that the release nearly equals about 2½ days of additional supply.

The pandemic made energy markets — like everything else — haywire on multiple fronts. As the closures began in April 2020, demand collapsed and oil futures prices turned negative. Energy traders did not want to get stuck with crude that they could not store. But as the economy recovered, prices jumped to a seven-year high in October.

U.S. production has not recovered. EIA figures indicate that domestic production is averaging roughly 11 million barrels daily, down from 12.8 million before the pandemic started.

Republicans have also seized on Biden’s efforts to minimize drilling and support renewable energy as a reason for the decreased production, though there are multiple market dynamics at play as fossil fuel prices are higher around the world.

New: The US has asked China, India, Japan & South Korea to join in a coordinated effort to release crude oil reserves. Announcement could come tomorrow. Biden officials think it will help lower gas prices, and will send a message to Saudi Arabia and OPEC https://t.co/FdyK7rPQXl — Natasha Bertrand (@NatashaBertrand) November 22, 2021

“President Biden’s policies are hiking inflation and energy prices for the American people. Tapping the Strategic Petroleum Reserve will not fix the problem,” said Sen. John Barrasso (R-Wyo.). “We are experiencing higher prices because the administration and Democrats in Congress are waging a war on American energy.”

Meanwhile, Biden and administration officials insist that tapping more oil from the reserve is not a contradiction with the president’s long-term climate goals, because this is a short-term fix to meet a specific problem, while climate policies are a long-term answer over decades.

They argue that because they are pushing to boost renewable energy, there will eventually be less dependence in the U.S. on fossil fuels. But that’s a politically convenient argument — in simple terms, higher prices reduce usage, and significantly higher gasoline prices could force Americans into less reliance on fossil fuels.

The White House decision comes after weeks of diplomatic negotiations and the release will be taken in parallel with other nations. Japan and South Korea are also participating.

The U.S. Chamber of Commerce criticized the move as an “ineffectual Band-Aid.”

“The Department of Energy’s reserve should only be used for supply disruptions,” Christopher Guith, the chamber’s senior vice president at the Global Energy Institute, said in a statement. “The White House should focus on policies that will encourage domestic production of oil and natural gas.”

“We will continue to press oil companies who have made record profits and are overseeing what we consider to be price gouging out there when there’s a supply of oil or the price of oil is coming down and the price of gas is not coming down,” Psaki said. “It does not take an economic expert to know that’s a problem.”