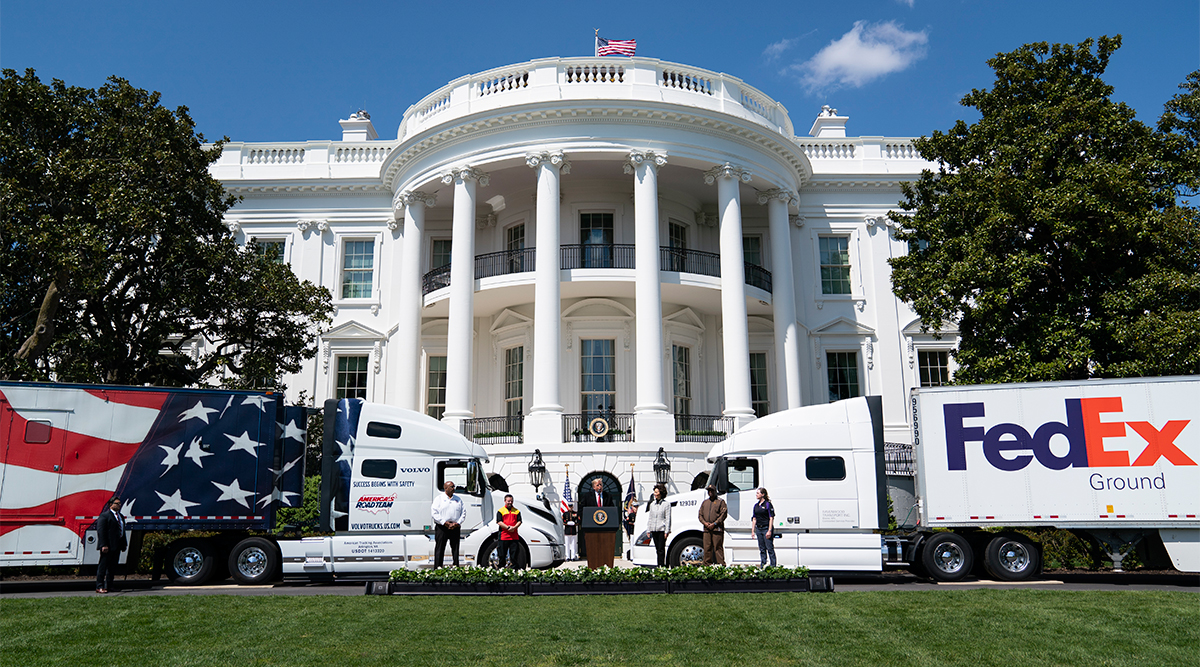 President Trump and Transportation Secretary Elaine Chao salute four truck drivers and the industry as a whole during a ceremony at the White House April 16. (Evan Vucci/Associated Press)

President Donald Trump praised truck drivers during an April 16 White House event attended by men and women who have taken to the nation’s roads to deliver supplies that Americans need to manage through the COVID-19 crisis.

“Thank God for truckers,” Trump said from the White House lawn, flanked by two trucks and four commercial drivers. Also in attendance were Secretary of Transportation Elaine Chao and American Trucking Associations President Chris Spear. (Watch a replay of the event here or below.)

“American truckers are the foot soldiers who are really carrying us to victory,” an enthusiastic Trump said. “They’ve done an incredible job. We’ve had no problems. It’s been just — it’s been just great.”

The president expressed optimism about ongoing coronavirus recovery efforts, and also for the prospects of advancing a $2 trillion infrastructure measure that would target roadways in need of repairs.

ADVICE ON RECOVERY PLANS: Trump to include trucking CEOs

America’s Road Team Captain Stephen Richardson, a professional driver with Tennessee-based Big G Express, said that a company for which he makes deliveries — spirits producer Jack Daniel’s — during the pandemic is producing hand sanitizer for health facilities, businesses and drivers. 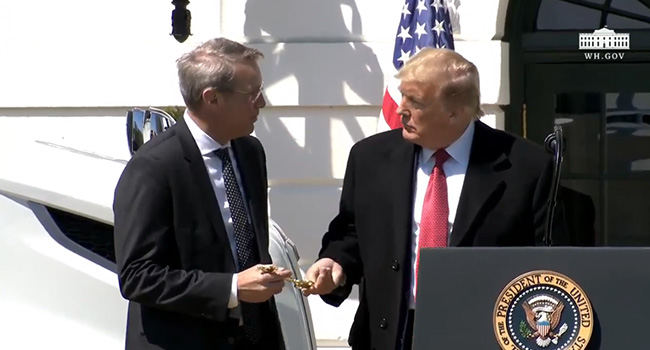 Spear receives a gold key as a gift from Trump at the end of the April 16 ceremony. (White House YouTube channel)

“Our partnership with Jack Daniel’s has led to a shift in making and delivering hand sanitizer to help keep essential workers and everyone else safe,” said Richardson, in prepared remarks. “In fact, they are supplying the truck drivers at Big G with the much-needed hand sanitizer.”

Also in attendance were Charlton Paul, a driver for UPS Freight out of Chester, N.Y.; Tina Peterson, a driver for FedEx Ground/Ravenwood Transport from Blaine, Minn.; and Dylan Madigan, a DHL Express driver from New Jersey. Each one spoke of their experiences from the road, and were given a gold key from Trump, which he described as an expression of thanks for their “essential” work. 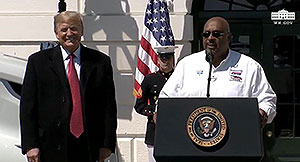 A truck from FedEx Ground and ATA image truck Interstate One provided the backdrop for the event. Richardson was one of several America’s Road Team captains at the event.

“It’s during a time of crisis when that kind of recognition, when those praises and thanks mean more to people than ever,” Spear told Transport Topics shortly after leaving the White House. “And we obviously have an industry filled with some of the hardest working patriotic people in the U.S. Those drivers are moms, dads. They’re husbands, wives. They’re involved in their communities. They’re very charitable. They are the essence of the American spirit and to see it recognized like this in a time of crisis, I have to say, I think that is really an extraordinarily important thing for the leader of our country to do.” 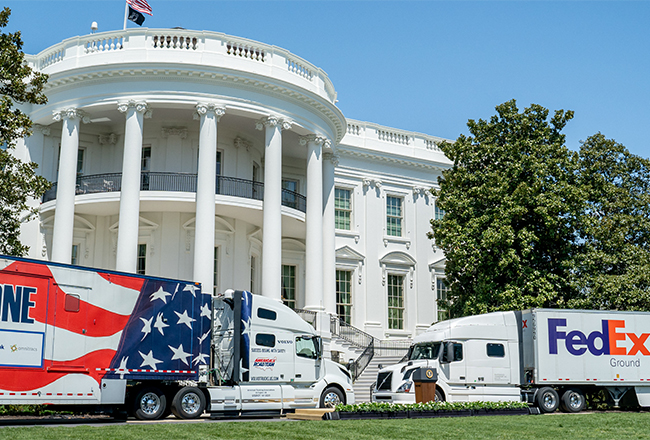 ATA's Interstate One truck and a FedEx Ground truck were part of the celebration. (Jeremy Kirkpatrick)

According to the White House, a newly formed group of transportation stakeholders is among those advising the president’s team on the economy. Included are ATA, FedEx Corp., UPS Inc., J.B. Hunt, YRC Worldwide, United Airlines, Crowley Maritime, Uber, DHL and LDJ Global Strategies.

Trump’s gathering with truckers occurred shortly before he was scheduled to communicate with governors on a federal economic road map he intends to recommend for reopening aspects of society. Doing so will be based on data from officials representing myriad sectors, such as health care, the president explained.

Governors have emphasized they would order a reopening based on health data, and availability of widespread testing and contact tracing. For instance, in New York, Gov. Andrew Cuomo, a Democrat, announced he would extend stay-at-home restrictions until May 15.

On Capitol Hill, several senior Republicans support a major economic reopening, while key Democrats hesitate to do so. Sen. Patrick Leahy (D-Vt.) said on April 16 such decisions “must be based on facts and medical science, backed up with the necessary resources, or we risk plunging the nation into a deeper crisis down the road.”

Besides Chao, other Cabinet members have praised freight stakeholders.

“The entire country is counting on these patriotic individuals, by doing the work in our food supply chain,” Agriculture Secretary Sonny Purdue said April 15. “These dedicated workers include, obviously, farmers and producers, but also processors, truckers and grocery store workers.”