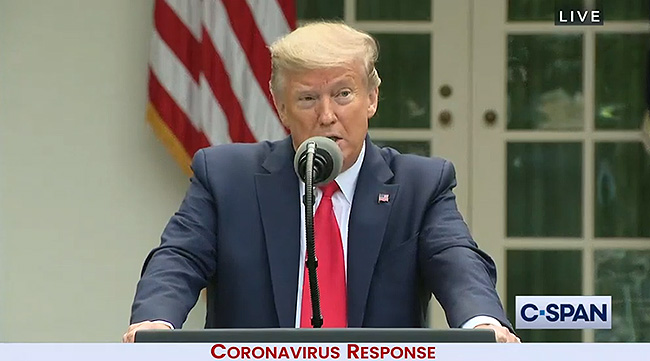 American Trucking Associations President Chris Spear is among the prominent business executives tapped by President Donald Trump to help revive the economy as the coronavirus pandemic shows signs of easing in some parts of the country.

“They’re going to give us some ideas,” Trump said April 14 at a briefing in the Rose Garden, where he unveiled a sprawling list of dozens of CEOs from industries ranging from agriculture to defense.

“I am honored to serve our president and the nation in this capacity, representing the trucking industry and joining four ATA member company CEOs, to bridge this crisis to a safe, speedy and full recovery,” said Spear. “Just as they have during the mitigation and response efforts, truckers will be at the forefront as we revive our economy’s engine and get our country moving again. No industry will be more vital, and we embrace the opportunity to play a leading role in this national effort.”

Trump mentions transportation leaders at about the 5:35 mark in this clip.

Trump didn’t elaborate on how the leaders might shape the administration’s policies. Another CEO mentioned with strong connections to the trucking world was Doug McMillon of Walmart Inc., which ranks No. 6 on the Transport Topics Top 100 list of the largest private carriers in North America.

Trump’s list included a slate of executives from Wall Street:

He named allies, including Sheldon Adelson of Las Vegas Sands Corp., but also Jeff Bezos, the CEO of Amazon.com Inc., who has been a repeated target of the president’s vitriol.

Trump said he would also be talking to executives and other leaders, including Richard Trumka, the head of the AFL-CIO, by telephone.

The groups that were announced April 14 didn’t appear to be the formal economic task force that the president has recently said he would form.

Trump has been eager to end economy-stifling social-distancing measures almost as soon as he announced them, though last month he extended them until April 30 on the advice of government health experts.

Many of those same health officials have cautioned that lifting restrictions on May 1 may be too soon. But Trump’s economic advisers have intensified their efforts to persuade the president that the country should reopen to stave off economic ruin.