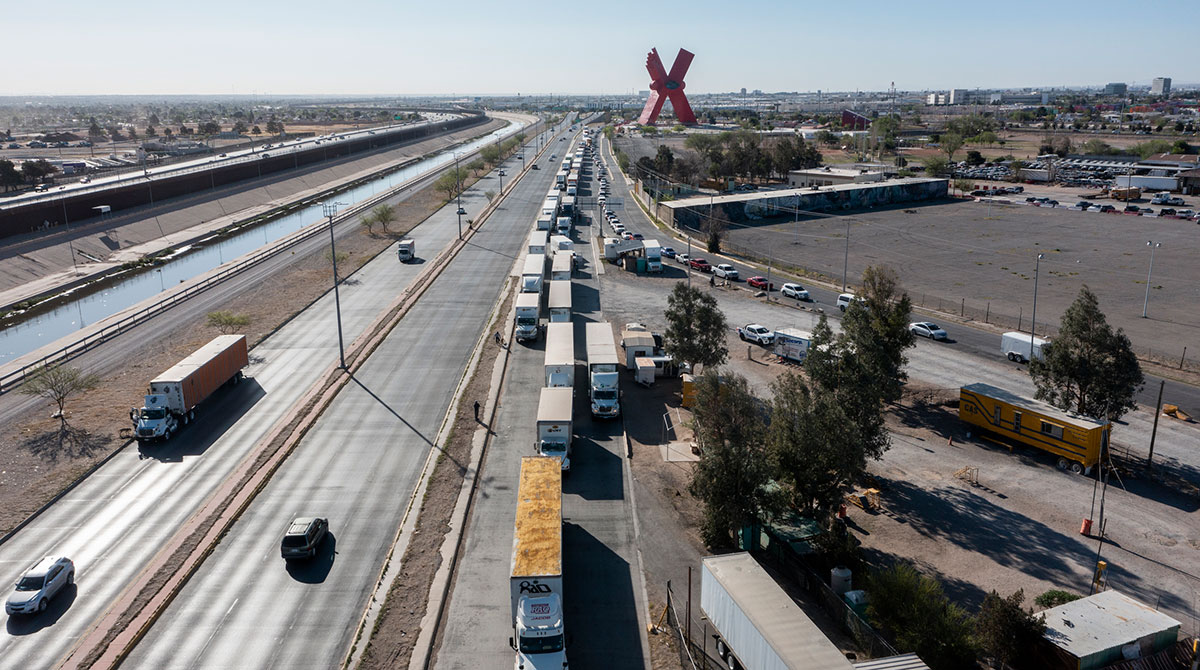 A long line of trucks is stalled at the Bridge of the Americas, one of two ports of entry in Ciudad Juarez going into the U.S. on April 12. (Omar Ornelas/The El Paso Times via AP)

AUSTIN, Texas — The logjam of trucks at the U.S.-Mexico border finally began breaking April 14 after nearly a week as Texas Gov. Greg Abbott eased off his latest dramatic action over immigration that has gridlocked some of the world’s busiest trade ports and taken a mounting economic toll.

“There is a sense of urgency now to reach deals that did not exist before,” Abbott said.

The two-term Republican governor, who for days has allowed commercial trucks to back up for miles into Mexico after requiring them to stop for additional inspections in Texas, lifted that order for bridges in El Paso and other cities after announcing a new security agreement with the neighboring Mexican states of Chihuahua and Coahulia.

Signed two more memoranda of understanding yesterday with the States of Chihuahua & Coahuila to prevent illegal immigration from Mexico to Texas.

The rollbacks come as Abbott has faced intensifying pressure over the policy he rushed into place April 6 as part of an ongoing fight with the Biden administration over the flow of migrants and drugs. Inspection orders remain in other parts along Texas’ 1,200-mile border, including the busy Rio Grande Valley, but Mexican trade leaders were optimistic those would also end soon.

The deal with Gov. María Campos Galván of Chihuahua, who joined Abbott for the announcement in the Texas Capitol, set in motion the biggest relief yet for traffic that has snarled the Texas-Mexico border and raised warnings of higher prices for U.S. shoppers and spare grocery store shelves.

“People like me who buy millions of dollars of produce a week are starting to curb their purchases toward other regions of the country,” said Brent Erenwert, CEO of Brothers Produce in Houston, which relies heavily on imports from Mexico.

The inspections ordered by Abbott came in response to the Biden administration announcing last month it would wind down a public health law that has limited asylum-seekers in the name of preventing the spread of COVID-19. When that happens, the number of migrants coming to the U.S. is expected to increase. 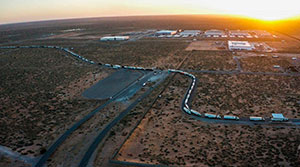 It was the second consecutive day Abbott has lifted inspections at some bridges, starting April 13 with Laredo, which was the busiest U.S. port of entry for trucks last year. Traffic coming into the Texas at the Pharr-Reynosa International Bridge, where more produce crosses than any other land port in the U.S., has also resumed after a dayslong protest by Mexican truckers came to an end.

One custom agency based in Mexico, the Association of Customs Agents of Reynosa, on April 14 put the losses at the Pharr-Reynosa bridge at $7 million a day.

The agreements between Abbott and Mexico’s governors have varied.

Across from Laredo, Nuevo Leon Gov. Samuel García had told Abbott his state would put in place checkpoints and policing. For Chihuahua, Galvan provided a security plan she said was in the “implementation stage” and includes agreements to share intelligence captured by security cameras and other technology. Later April 14, Abbott also announced a similar agreement with the Mexican governor of Coahulia.

Texas Agriculture Commissioner Sid Miller, a Republican who has urged Abbott to walk back the inspections order, said April 14 one major agricultural company told him that 100 trucks sent to Mexico for deliveries have been unable to come back across because of the congestion.

He questioned what the holdout achieved, and in the case of Abbott’s agreement with Nuevo Leon, said it did not appear substantive.

“They’re just basically going to leave it up in good faith,” Miller said. “There’s no enforcement, no reckoning on that if they don’t.”

The White House, the Mexican government, trade groups and reeling businesses have bashed the extra inspections as redundant and a new burden on an already fragile supply chain.

Abbott’s border inspections come at a time when U.S. supply chains are already overwhelmed. A surge in demand from customers — the result of a surprisingly fast recovery from the devastating coronavirus recession of 2020 — caught businesses by surprise and led to bottlenecks at factories, ports and freight yards. It’s also pushed up prices, contributing to the highest inflation in 40 years.

COVID-related factory shutdowns in China and the rocketing cost of shipping goods across the Pacific Ocean have many companies looking to Mexico, where there’s no ocean to cross and there’s relief from the political and trade disputes between Washington and Beijing.

“A lot of companies, right now, they’re looking at Mexico as a way to bypass ocean dependency,’’ said Bindiya Vakil, CEO of the supply chain consultancy Resilnc. “If I’m one of those companies, I’m looking at this new regulation on the Texas border and I’m really concerned because this means additional delays, and that was supposed to be my solution — to go to Mexico and avoid the ocean altogether.’’

The U.S.-Mexico border is crucial to the U.S. economy. The United States last year imported $390.7 billion worth of goods from Mexico, second only to China.

But as the inspections taper off in Texas, Abbott says he will continue putting migrants on buses and sending them to Washington, D.C., calling it a message to President Joe Biden. “If he’s not going to come to the border, we’re going to take the border to him,” Abbott said.

U.S. Customs and Border Protections Commissioner Chris Magnus said April 14 that Abbott was moving migrants without “adequately coordinating” with the federal government. The first bus arrived April 13, and Abbott said more are on the way.

Paul Wiseman in Martinsburg, W.Va., Maria Verza in Mexico City and Elliot Spagat in San Diego contributed to this report.