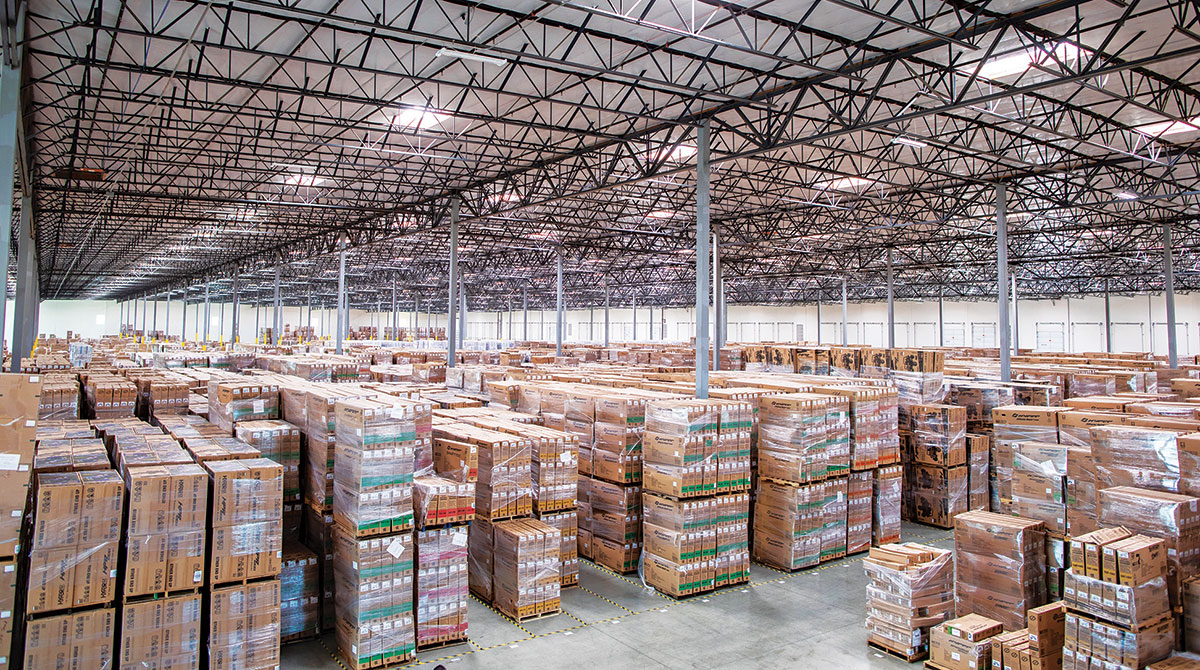 The past few years have been volatile for retailers. Consumer demand spiked, and then products got stuck in the supply chain, arriving late and missing seasonal delivery windows. In response, retailers proactively increased orders to mitigate the risk of delays. However, consumer demand slowed, leaving warehouses full and operators stacking inventory while waiting for a decline.

“The product is not leaving the warehouse as quickly as expected, leading to very full warehouses,” said Fred Gilbert, executive vice president of Weber Logistics. “It’s a basic imbalance between supply and demand, which will take some time to return to equilibrium.”

Rock Magnan, president of RK Logistics, based in Fremont, Calif., said that while the visual of ships sitting at ports is gone, there is a ripple effect, noting that much of the freight that was on those ships missed its window to be in the retail store.

“We’re seeing out-of-season stock being taken out of containers and put in warehouses that should have gone from the ports to the distribution centers and then out to the stores,” he said. “They don’t want to miss their next window, so product is being delivered into the U.S. earlier than it would have been.”

Peter Bayer, senior vice president of operations at Penske Logistics, argues that warehousing is a basic process where product arrives, it’s offloaded, then stored. But when it comes in irregular patterns, there’s imbalance and friction. 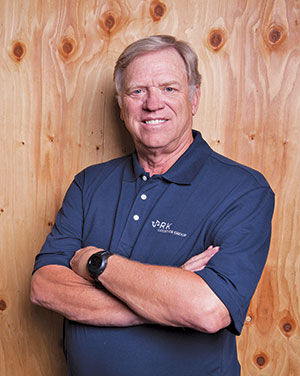 He noted that friction results in warehouse labor scheduling issues, driving overtime, congested yards, increased driver detention and inefficiency. Most importantly, it has created a lack of space. In most markets, occupancy is at 98% to 99%, and what is open may not be available for three or six months. “We have found more often than not, we’re jamming it in,” Bayer said.

The overwhelming majority of Penske Logistics’ customers in the food and beverage and consumer product goods space have seen inventory levels creeping up. “For a number of our customers, we’ve pushed warehouses to 120% of their capacity, which literally means every nook and cranny is stuffed,” he explained. “A lot of it is stuff they ordered a year ago that finally showed up.”

Weber Logistics’ Gilbert has seen a significant increase in inventory across the company’s 16 warehouses. “This has driven the need for creative solutions to store extra inventory while still ensuring the handling space required to operate effectively,” he said.

The Santa Fe Springs, Calif.-based fleet has re-engineered client-facing solutions by securing additional material handling equipment, adding conveyors, and adding racking to accommodate more product and handle it more efficiently given the limited space. Weber Logistics has worked with clients to secure storage trailers to hold products, but trailers are hard to come by. “We have our own fleet, so we’ve been able to deploy some of those — four or five — but we could probably use 100,” Gilbert said.

Brian Bourke, chief growth officer at Seko Logistics, which is based in Itasca, Ill., and ranks No. 29 on the Transport Topics Top 100 list of the largest logistics providers in North America, said he has seen companies rent trailers and attach to the dock doors, take on offsite storage and even use yards with rented trailers. 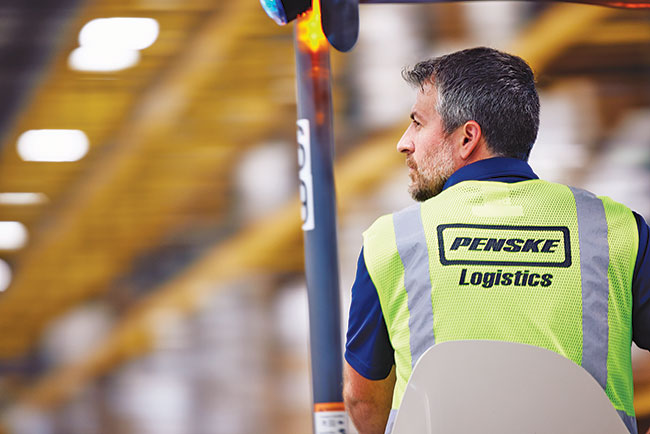 Some industry leaders are expecting warehouse spacing to be scarce for the next 12-18 months. (Penske Logistics)

John Vaccaro, president of Bettaway Supply Chain Solutions, based in South Plainfield, N.J., said trailers are the first go-to point for every shipper when space is tight. That has created a shortage and doubled the value of end-of-life trailers.

“There is no relief valve in trailers,” he said, adding that warehouses have to work with what they have. “It is a four-wall business. You can’t do anything about that. You have to use every square inch on the floor and the linear feet going up. We try to be smart as far as racking and stacking light stuff on heavy stuff to use every footprint.”

When product isn’t moving, it is easier to pack it in tight, said Ryan Martin, president of asset operations for ITS Logistics. “From a strategic standpoint, we try to move deadstock to the worst possible location, but still, you’re touching it,” he said. “Every time you touch it, it costs you money. We have months where we’ve spent six figures on labor just to move product around.” ITS Logistics is based in Sparks, Nev., and ranks No. 60 on the TT Top 100 logistics list. Bayer noted that recruiting and retaining labor is an ongoing issue. “We’re challenged to find the people to work consistently,” he said, adding that across customers, labor makes up about two-thirds of the cost basis.

Retailers and brands are also working to solve the problem. “We’ve seen some offer discounts and slash prices, which increases sales orders but cuts into margins. We’ve also seen brands use this as an opportunity to enter new markets and shift inventory to new geographies,” Seko’s Bourke said. “We’ve also seen some retailers take on additional warehousing space in order to hold on to product to wait out any slowdown to see how Q4 and next year perform.”

As warehouses reach capacity, they can become inefficient, but in some cases, processing and efficiency have taken a backseat to maximizing square footage, especially as demurrage and per diem fees increase, Martin said.

Bayer said that generally if a warehouse gets about 85% capacity, there is a productivity trade-off. “You should always have some open capacity,” he said.

He added that meeting freight carrier demands can also drive down productivity in the warehouse. “As a 3PL, we want to take care of our customers’ inbound freight and those drivers. It may mean we’re going to unload 40% more trucks in a period of time than we normally would,” he explained. “Rather than unload and put it away, I’m going to just put it on the inbound dock to get it unloaded, but then it has to be handled again, which increases cost.”

As warehouses reach capacity, there is less room for error and it calls for a high-level of performance. Most warehouse management systems have slotting technology. Being able to see inventory and make real-time decisions is critically important with a higher capacity to manage products and labor.

Weber is collaborating with customers to understand their forecast, product arrival times, how much they can accommodate, and when products will leave the warehouse. “We need as much information as we can get,” Gilbert said. “This collaborative planning, while basic, is extremely important to ensure containers don’t arrive without a place for the product to go, which creates added costs in the form of demurrage and detention.”

Kasia Wenker, director of supply chain solutions for ITS Logistics, said basic analytics, such as inventory turns, come into play. “All of those articles on inflated inventory should mean nothing to supply chain professionals. You have to understand the inventory turns and the sales,” she said.

Landlords control today’s commercial real estate market, and the situation is reflected in high rates. In Southern California, Penske Logistics, which is based in Reading, Pa., and ranks No. 21 on the TT Top 100 logistics list, has three buildings coming up with lease renewals, and the smallest increase is 120%. “That is on the high side, but even in markets where we’ve seen traditionally 3-5% increases annually, we’re seeing 35% increases because there is limited space,” Bayer said.

Bourke expects warehousing to be scarce for the next 12-18 months. “Companies should look at markets like Atlanta that are softening and look for space in these markets now to take advantage of space and lower storage rates,” he said. 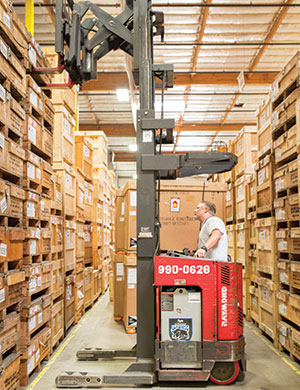 Magnan said that long-term leases make it difficult to commit to space when this is likely a short-term problem.

“You’re balancing inflation with a potential recession, so it is a pretty dicey time to be committing to a seven-year warehouse lease to store retail products that shouldn’t be sitting in the warehouse. They normally stay on a container, go right to a [distribution center], get unloaded and the container goes back to the port. Why would I lease a warehouse when I expect demand to drop?”

Warehouses will get back in sync once stale goods are dealt with and adjustments happen. Gilbert expects to see improvements in 12-18 months.

“While many of our clients have too much inventory, this will get resolved as demand picks back up,” he said. “That said, we’ll likely continue to see some COVID impacts, port congestion, driver shortages, limited warehouse availability, and many other factors that will continue to make operating in this industry challenging.”

“We were going to build it out no matter what, but we probably went a little bigger than we’d normally go,” Martin said.