Pelosi Says ‘Just About There’ on Stimulus; Senate Hurdle Awaits 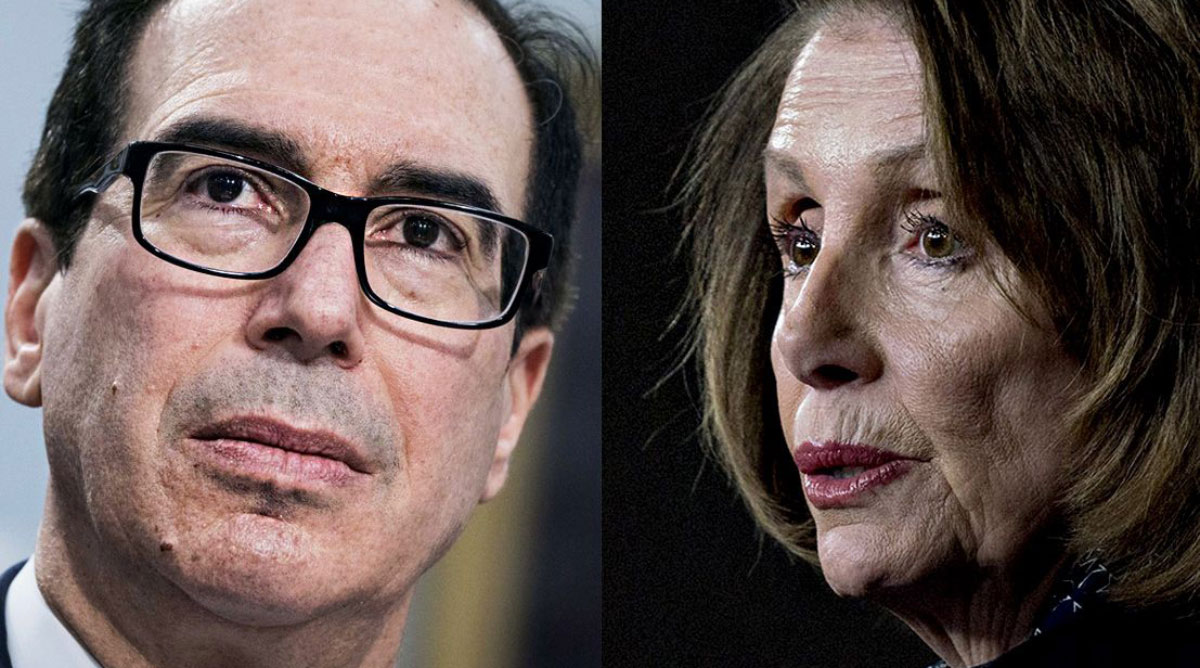 House Speaker Nancy Pelosi said she and Treasury Secretary Steven Mnuchin are “just about there” on a deal for a coronavirus relief package even as there are outstanding differences still being negotiated.

Pelosi said she and Mnuchin were nearing agreement on how to allocate money for testing and tracing to safely reopen schools and the economy, a key aspect in the talks. She said they still haven’t settled three of the main sticking points — Democrats’ demands for aid to state and local governments, school funding and Republican insistence on a liability shield for employers.

Pelosi and Mnuchin are scheduled to talk by phone again the afternoon of Oct. 22 as they rush to forge a compromise that would allow introduction of stimulus legislation in the House.

“We continue to be engaged in negotiations and I am hopeful we will be able to reach agreement,” Pelosi said at a news conference Oct. 22. She said earlier on MSNBC that it “would be my hope” to get fiscal stimulus done by the Nov. 3 election, but pointed to Senate Majority Leader Mitch McConnell’s publicly expressed opposition to the spending levels under discussion. 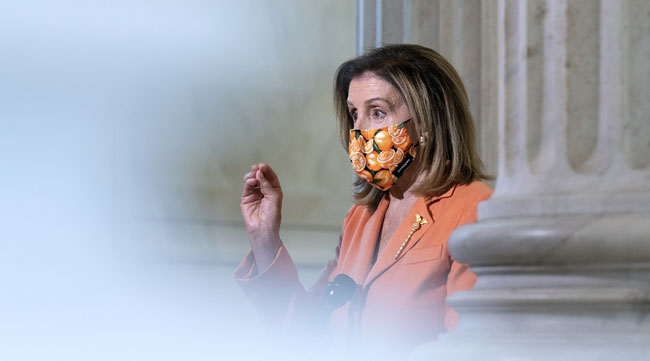 Senate Republicans remain the ultimate roadblock to enacting a roughly $2 trillion deal being negotiated by Pelosi and Mnuchin. McConnell has made no promises on when the Senate might take up any compromise agreement, and some senior GOP lawmakers expressed skepticism whether the chamber would vote on one even after the election.

Funding for state and local governments, a key issue of dividing Democrats and Republicans going back to the summer, was singled out by both sides as a remaining stumbling block. President Donald Trump and his allies have characterized large-scale aid to local authorities as an effort to bail out poorly run, Democratic states.

Trump made that charge again in a tweet Oct. 21. He also said, “Just don’t see any way Nancy Pelosi and Cryin’ Chuck Schumer will be willing to do what is right for our great American workers, or our wonderful USA itself, on Stimulus.”

White House Chief of Staff Mark Meadows earlier Oct. 21 complained that it’s the administration that’s “advancing this negotiation further and further to Nancy Pelosi’s side of the ledger.” The speaker has made only “small” concessions, he said on Fox News.

Senate Democratic leader Chuck Schumer on Oct. 21 put the onus on Republicans for the lack of an agreement, highlighting reports that McConnell had advised the White House to avoid a pre-Nov. 3 deal, given the likelihood of division among Republicans on any vote in the Senate. “Ask the American people. They know who to blame,” Schumer said.

GOP senators, meanwhile, raised concerns about both the size of the deal under negotiation — $1.9 trillion, according to Meadows — and policy issues in the language. 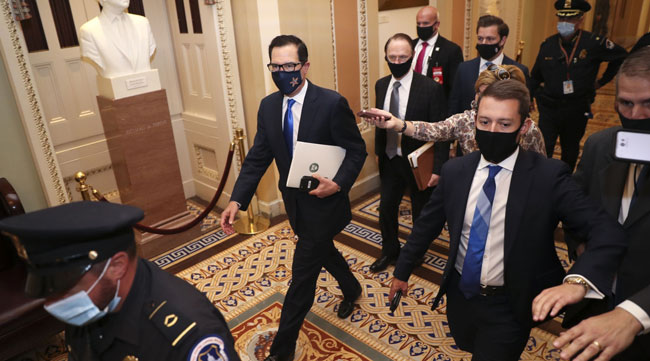 Even if Treasury Secretary Steven Mnuchin and Pelosi reach a deal, the two will face another challenge in convincing the Senate. (Oliver Contreras/Bloomberg News)

Sen. John Cornyn of Texas said, “Part of the message from Senate Republicans is: we need to have a discussion about the substance” of policy measures. Republican senators’ concerns include lack of language to prevent government funding for abortions.

GOP members also expressed skepticism about a post Nov. 3 vote on a stimulus deal. Pelosi had floated such a possibility Oct. 21, and White House economic adviser Larry Kudlow said the economy and markets would still benefit from the announcement of a deal between the administration and the House in the next two weeks.

Missouri Republican Roy Blunt, a member of McConnell’s leadership team, said, “If we’re going to do it this year, I think it’s now or never.” Republican vote counters in the Senate won’t have the 13 votes needed to pass a stimulus package as large as Pelosi is seeking, according to John Thune, the party’s No. 2 leader in the Senate.

RELATED: Pelosi, Mnuchin Near a Deal, With Post-Election Vote Floated

Republican Sen. Chuck Grassley of Iowa told reporters, “It’s pretty hard to predict because I think that what happens in the presidential election will determine that more than anything we know right now.”

Meadows said, “The president’s willing to lean into this” with Republican senators if a deal is reached. But he, too, said he doubted chances of passage were better after the election.

Meadows said on Fox Business that the “biggest issue remains state and local assistance.” While the administration estimates that those authorities have lost $250 billion to $275 billion in revenue thanks to the coronavirus crisis, Pelosi is seeking aid of “about twice that number,” or closer to $500 billion, he said.