Pelosi, Mnuchin Near a Deal, With Post-Election Vote Floated 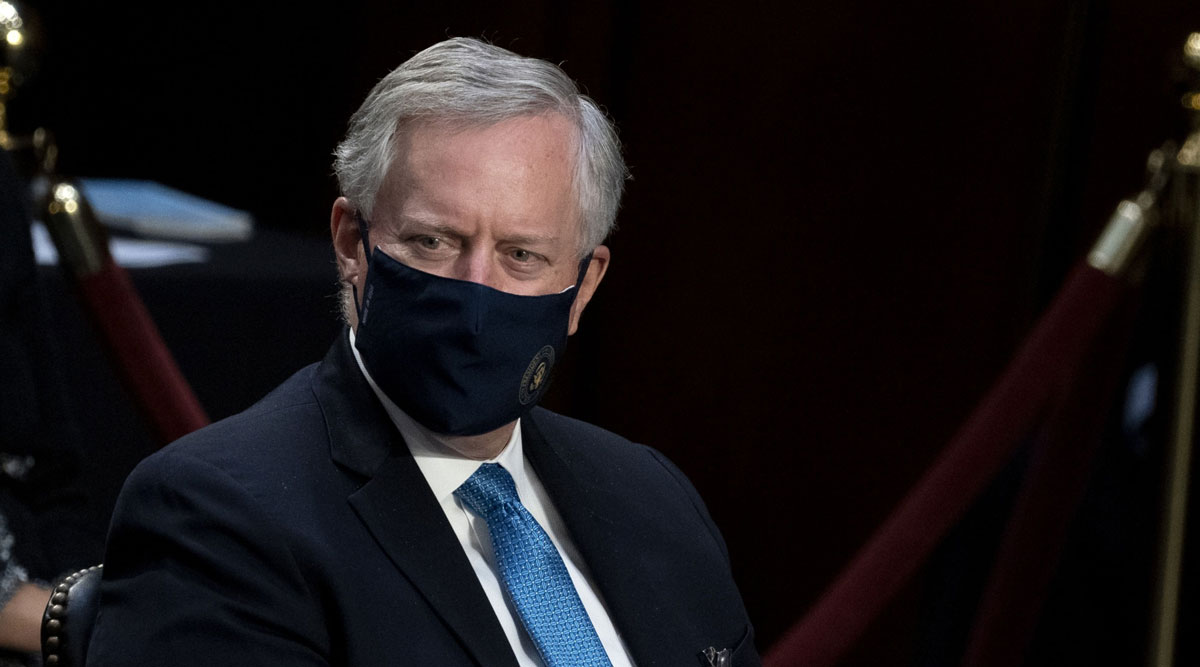 White House Chief of Staff Mark Meadows said the hope was to reach a deal on new stimulus by Oct. 23. (Stefani Reynolds/Bloomberg News)

House Speaker Nancy Pelosi said she “has a prospect for an agreement” with Treasury Secretary Steven Mnuchin on a coronavirus stimulus package, although it may not come together in time to pass both chambers before the Nov. 3 election.

White House Chief of Staff Mark Meadows said Oct. 21 that the administration is aiming for an agreement within the next 48 hours. Pelosi later said she’s “pretty happy” about the talks, even though there are a few sticking points, like the scale of funding for state and local governments.

“The last 24 hours have moved the ball down the field,” Meadows said on Fox Business the morning of Oct. 21. 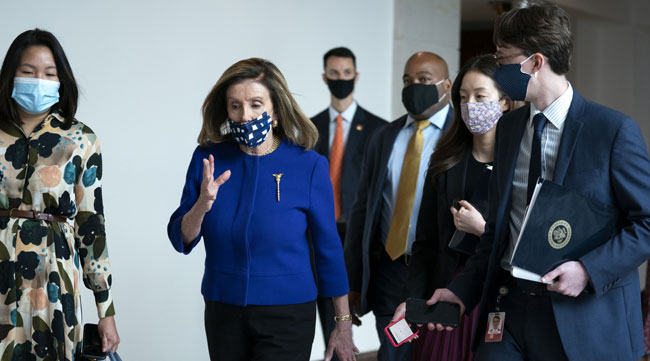 Mnuchin and Pelosi are scheduled to speak again at 2:30 p.m. on Oct. 21. Any agreement still faces a roadblock in the Senate, however, with Majority Leader Mitch McConnell having warned the White House against agreeing to anything akin to Pelosi’s more sweeping proposal.

McConnell “might not mind doing it after the election,” Pelosi said. White House economic adviser Larry Kudlow said earlier that if the actual vote on a compromise has to wait until post-election, just announcing a deal before Nov. 3 would still be “very helpful to the economy and markets.”

“There will be a bill. The question is: is it time to pay the November rent — my goal — or will it be shortly after,” Pelosi said Oct. 21 on MSNBC. “I want people to know that help is on its way. It will be bigger. It will be better. And it will be retroactive.”

Despite the comments from Pelosi and Kudlow, it could still be an uphill battle to get passage in the Senate after Nov. 3.

“It’s pretty hard to predict because I think that what happens in the presidential election will determine that more than anything we know right now,” Republican Senator Chuck Grassley of Iowa told reporters.

Senate Republicans remain on an entirely different track, with a number of them opposing anything on the order of $1.8 trillion. Mnuchin has put forward $1.88 trillion, while Pelosi wants $2.2 trillion.

GOP vote counters in the Senate won’t have the 13 Republican votes needed to pass a stimulus package as large as Pelosi is seeking, according to a Senate aide.

Given the risk of a damaging public split in the party just days before they face voters, McConnell has warned the White House not to rush into an agreement before the election, according to a person familiar with the matter.

Meadows denied such a “warning” had been given, though did say Oct. 20 that he recognized some GOP senators oppose another stimulus. He went to Capitol Hill Oct. 21 to speak with Senate Republicans.

“We’re working with Speaker Pelosi right now trying to get her to be reasonable,” Meadows said on his way into a closed GOP meeting. “Once we get a deal there, hopefully we’ll be able to discuss the merits with our Senate colleagues.”

McConnell plans to seek a vote on a scaled-down package Oct. 21 — a maneuver he tried last month only to be blocked by Democrats insisting on a comprehensive bill.

“Our Democratic colleagues have been happy to talk about further relief as long as it remained a hypothetical concept,” McConnell said Oct. 21. He criticized Pelosi for insisting on getting everything she wants out of a deal, including “wheelbarrows of cash” for mismanaged states.

The Senate Republican effort of $500 billion includes items that both sides support, but is stripped of the elements many GOP members oppose — including large-scale assistance to state and local authorities, tax credits for working families and relief for airlines. 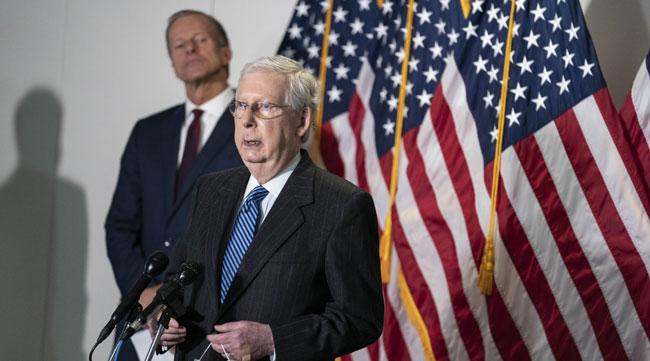 McConnell said Oct. 20 his chamber would take up a comprehensive coronavirus stimulus package “at some point” if Pelosi and Mnuchin are able to resolve the final areas of disagreement and get a bill through the House. But he didn’t say whether he would support such a deal, or encourage GOP members to back it.

The Senate majority leader is focused instead on speeding confirmation of Supreme Court nominee Amy Coney Barrett, with a potential vote expected early the week of Oct. 26.

Meadows said on CNBC Oct. 20 that if a deal does get done and through the House, “it probably will divide the Republican conference.” There are “some senators who really believe that we’ve done enough for the economy and want zero,” he said.

Progress was made in recent days over a national coronavirus testing and tracing plan. Pelosi also said, in a Bloomberg TV interview Tuesday, she planned to bring a counter-offer to Mnuchin on a Republican push to provide businesses with liability protection against virus-related lawsuits.

Meadows also said the “biggest issue remains state and local assistance.” While the administration estimates that those authorities have lost $250 billion to $275 billion in revenue thanks to the coronavirus crisis, Pelosi is seeking aid of “about twice that number,” or closer to $500 billion, he said.

Meadows suggested a compromise could be found, however. “If we can add additional moneys in terms of transportation and onshoring I think there’s a deal to be made,” he said, referring to the White House’s desire for incentives to bring manufacturing back to the U.S.