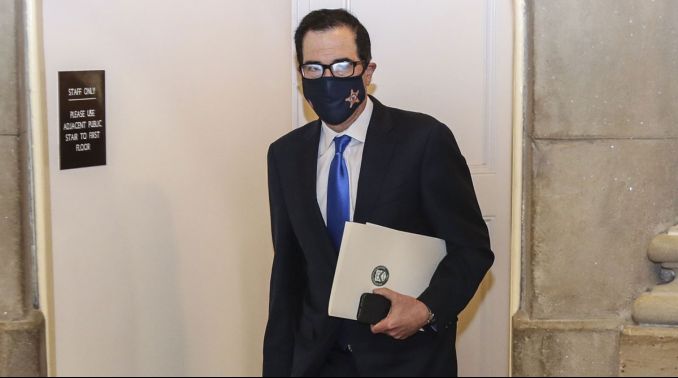 Treasury Secretary Steven Mnuchin, who's on a trip to the Middle East, will speak on the phone with Nancy Pelosi on Oct. 20. (Oliver Contreras/Bloomberg News)

After months of on-again, off-again talks on an increasingly needed fiscal-stimulus package, Oct. 20 is shaping up as a do-or-die moment for Treasury Secretary Steven Mnuchin and House Speaker Nancy Pelosi to get a virus relief deal done in time for Election Day.

With Mnuchin phoning in from a Middle East trip, he and Pelosi will make one more effort to patch up differences between the White House and Democrats on a welter of issues that have prevented agreement since talks began in July.

“We’ll see what tomorrow will bring,” Pelosi said on MSNBC on Oct. 19. “Let’s make a judgment. We may not like this, we may not like that. But let’s see on balance if we can go forward.”

Her spokesman Drew Hammill said earlier on Twitter that “the Speaker continues to hope that, by the end of the day [Oct. 20], we will have clarity on whether we will be able to pass a bill before the election.”

Neither Pelosi, in a call with House colleagues Oct. 19, nor President Donald Trump, in a campaign appearance in Arizona, telegraphed that a deal is looming. Pelosi again listed a divide in principles on how to deploy stimulus money, while Trump again charged the speaker with holding back from an agreement to gain an electoral advantage — something he repeated Oct. 20.

“Here’s the problem: she doesn’t want to do anything until after the election, because she thinks that helps her,” Trump said on Fox News. “I want to do it even bigger than the Democrats. Not every Republican agrees with me, but they will,” he also said, reiterating that he’s willing to go beyond the $2.2 trillion top-line number Democrats favor.

Areas of division include the scale of assistance to state and local authorities, tax credits Democrats want for lower-income families, liability protections that Republicans are pushing but Democrats oppose, and a repeal of a credit for past business-tax losses that Republicans want to keep. 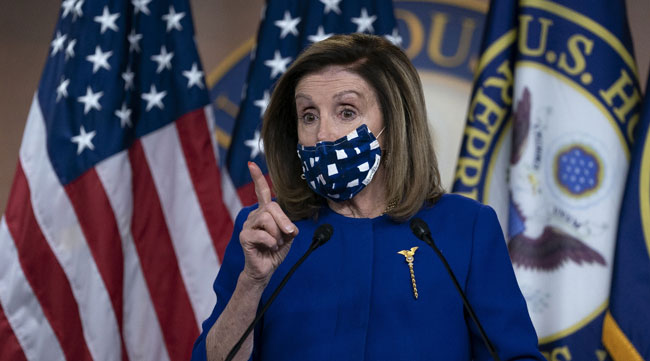 House Speaker Nancy Pelosi has set a deadline of Oct. 20 to reach a deal on a stimulus bill before the Nov. 3 election. (Stefani Reynolds/Bloomberg News)

One potential, unintended beneficiary of the lack of any deal could be Senate Republicans who have opposed the $1.8 trillion-or-more size proposed by the White House. Voting against a bill would showcase a split in the GOP days before Nov. 3.

Senate Republicans on Oct. 20 will attempt to proceed with one of two planned votes on smaller-scale stimulus efforts that both the Trump administration and the House Democratic majority oppose.

With Election Day in two weeks, Senate Republican leader Mitch McConnell is aiming to shame Democrats for what he described as an “all or nothing” approach with their insistence on a $2.2 trillion bill.

McConnell Oct. 20 will try to secure a vote on legislation allowing unused funds from the March stimulus law to replenish the Paycheck Protection Program to aid small businesses. On Oct. 21 he plans a $500 billion stimulus, along the lines of what he tried and failed to pass last month.

It’s the latest positioning for Republicans who may be seeking to portray an image of supporting fiscal discipline in the event that Joe Biden wins the White House and seeks more expansive federal spending. The No. 2 Senate Republican, John Thune, underscored Oct. 19 that “it would be hard” to find enough GOP members to back a $1.8 trillion stimulus, the scale of the White House’s most recent proposal.

Even so, Trump Oct. 20 reiterated his view that McConnell will proceed with any bill agreed between the administration and Pelosi. “He’ll be on board if something comes,” he said.

Meanwhile, Senate Democratic Leader Chuck Schumer again rejected McConnell’s moves for skinny assistance packages. “The Republican proposal was unacceptable a month ago. It remains unacceptable now — even more so that the crisis has gotten even worse,” he said Oct. 19.

Trump administration officials keep insisting that Senate Republicans will come around. An easier outcome for McConnell will be if the talks between Pelosi and Mnuchin fall through.

Hammill said Democratic committee chairmen have been directed to work with their Republican counterparts in the Senate to resolve the most stubborn sticking points.

They have plenty to work on. In a conference call earlier Oct. 19, Pelosi told House Democrats that significant areas of disagreement are standing in the way of any deal. House committee chairmen also explained why they should hold firm on their priorities for coronavirus relief.

“Markets remain extremely skeptical,” said Ray Attrill, head of foreign-exchange strategy at National Australia Bank Ltd. in Sydney. “There’s a sliver of optimism there, but the stock market today is saying more likely than not, it’s not going to happen,” he said after the S&P 500 Index slumped Oct. 19. It closed down 1.6%.