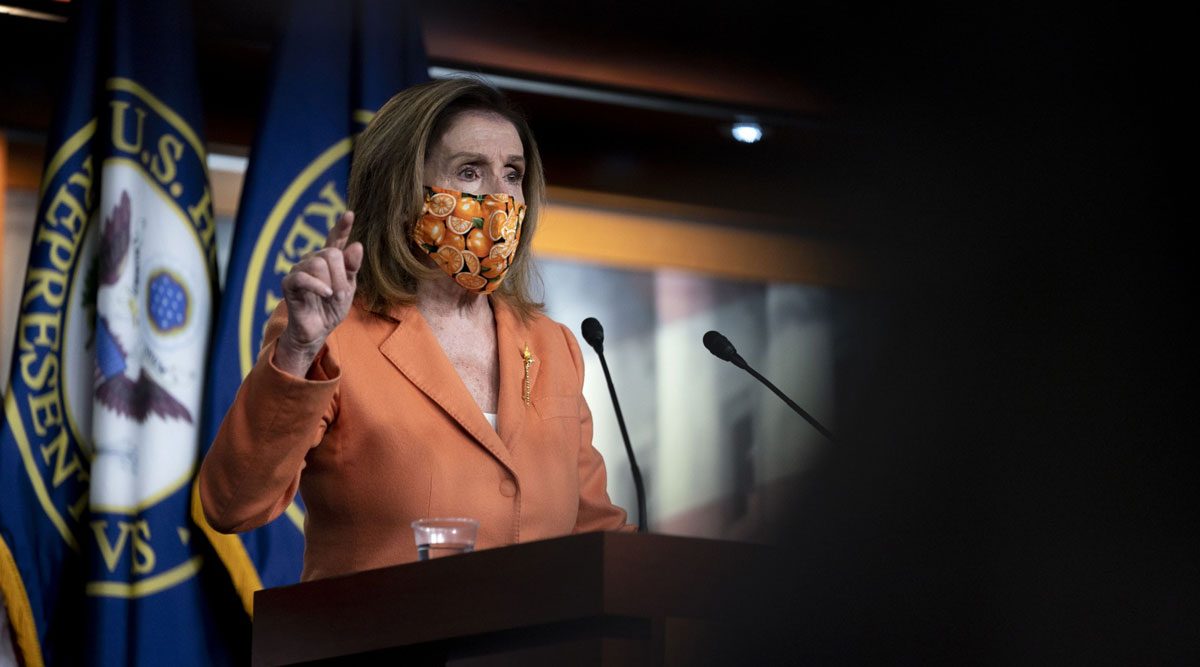 Treasury Secretary Steven Mnuchin and House Speaker Nancy Pelosi will hold a call the afternoon of Oct. 19 on a fiscal-stimulus package, a day before Pelosi’s deadline for a pre-election package expires.

The two main negotiators will speak at 3 p.m., according to a person familiar with the plan who asked not to be named as the schedule isn’t public. Mnuchin and Pelosi have in recent days been trying to nail down agreement on a national coronavirus testing program — one of several issues that have prevented a stimulus compromise.

“We remain committed to negotiating and also committed to making sure that we get a deal as quickly as possible,” White House Chief of Staff Mark Meadows said on Fox News Oct. 19. “If Nancy Pelosi will be reasonable, she’ll find the president of the United States to be reasonable and we’ll get something across the finish line.”

A welter of dividing lines remain between the two sides, including the scale of assistance to state and local authorities, tax credits Democrats want for lower-income families, liability protections that Republicans are pushing but Democrats oppose, and a repeal of a credit for past business-tax losses that Republicans want to keep.

Before she talks to Mnuchin, Pelosi is set to hold a closed call with House Democrats at 2 p.m. on the current status of stimulus negotiations.

The Oct. 20 deadline “relates to if we want to get it done before the election, which we do,” Pelosi said Oct. 18 on ABC’s “This Week,” indicating they could continue talking about passing a stimulus measure after Nov. 3.

Amid the continuing stalemate in negotiations, lawmakers have been voting on single-party proposals in an effort to demonstrate to voters that they’re determined to do something to help households and businesses that continue to be hammered by the COVID-19 crisis.

After House Democrats early this month voted on a $2.2 trillion package, Senate Republicans will try to stage two votes in coming days on separate, smaller relief efforts. Both are expected to be blocked by Democrats.

First up on Oct. 20 in the Senate is a stand-alone bill to allow unused money left over from a $2 trillion March stimulus deal to reinvigorate the Paycheck Protection Program, which provides help to small businesses facing the risk of layoffs.

On Oct. 21, McConnell plans to proceed with a broader package, on a scale that Democrats say isn’t sufficient. His last attempt at such a move, in September, was blocked.

Trump has repeatedly expressed confidence that reluctant Republicans will follow his lead. If Pelosi would go along with the administration’s offer, “I think they would too on stimulus,” he told reporters in Nevada on Oct. 18. “So let’s see what happens.”

Meadows said if Pelosi and the administration get an agreement, McConnell “will bring it to the floor, it will get a vote and hopefully we’ll get stimulus on the way to the American people.”

Most forecasters say nothing will be done before the Nov. 3 election. The question then is whether relief could get wrapped into an overall spending bill, which is due by Dec. 11. Without passage of such a stopgap funding package, the federal government faces a shutdown.

But it’s uncertain how Trump would approach post-election talks if he loses to Democrat Joe Biden, or whether he could drive a harder bargain if he’s re-elected.

“Anybody who would want to predict what President Trump will or won’t do is doing so at their own risk,” said former Republican House Speaker John Boehner.

Boehner, now a senior strategic adviser at lobbying and law firm Squire Patton Boggs, said if Trump wins it’s likely that a smaller stimulus bill will be included in government funding legislation that has a Dec. 11 deadline.

“If Joe Biden wins the election they’ll hold off on a stimulus bill of any size until after the inauguration, and then you’re likely to see a rather large stimulus bill pass the Congress and get signed into law,” Boehner said Oct. 16 during a virtual event on the post-election outlook held by his firm.