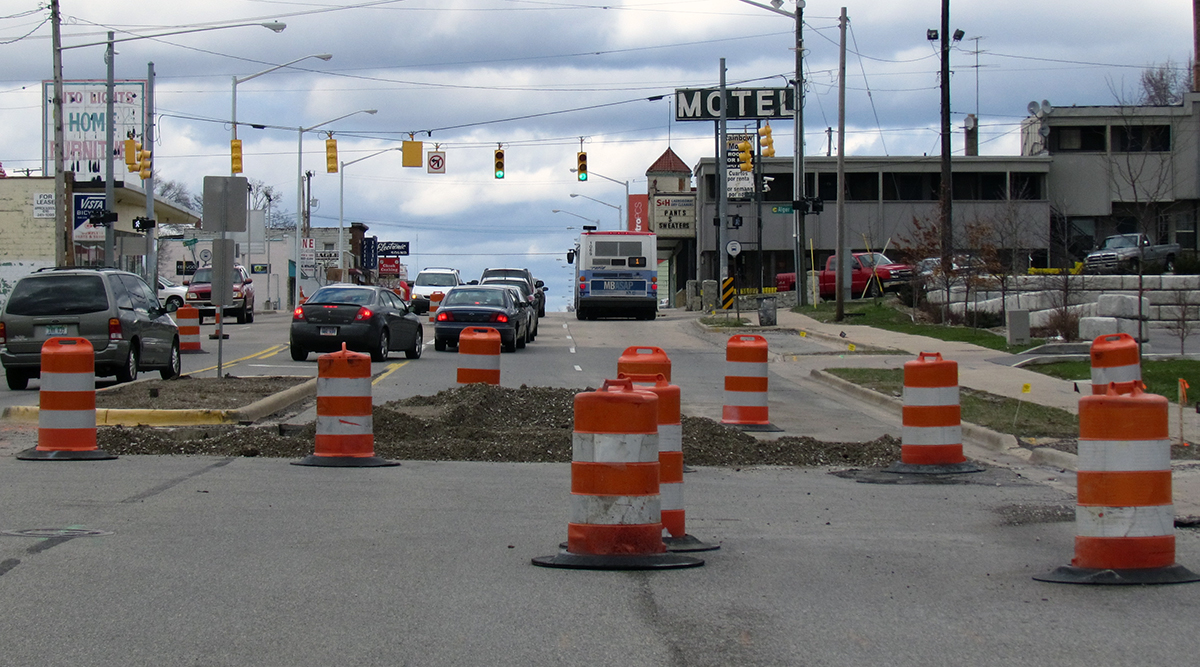 FRASER, Mich. — Warnings begin as soon as you arrive. Beware of the potholes.

They’re everywhere in this Michigan city near Detroit, rattling travelers’ teeth and popping tires, making for a lunar-like obstacle course. Local television newscasters hand out gift cards for tire repairs amid their reports on banged wheel rims and stranded motorists. “POTHELL!!” blared a recent headline in the Detroit Free Press.

The problem is not just above ground. Faulkner and his family were evacuated on Christmas Eve 2016 after a giant sinkhole swallowed one neighbor’s house and forced another to be demolished. Then the Faulkners suffered through months of foul odors as crews repaired aging sewer mains. Nearby beaches on Lake St. Clair closed for weeks over the summer because of fecal contamination from overflowing sewers.

Such decay is one reason President Trump found such a receptive audience here and in other industrial cities in the Midwest when he vividly described aging airports, lead-tainted water systems and crumbling roads and bridges as evidence of a country that had lost its way, thanks to feckless leaders of both parties who’d neglected the basics.

The self-professed billionaire builder was the one to fix things, he boasted.

Here in middle-class Macomb County, where more than half of the 1,500 lanes of road are deemed in poor condition, local business and political leaders say fixing the infrastructure is also essential to fulfilling another Trump vow: restoring the country’s manufacturing base. An industrial renaissance is brewing here, they say, with billions of dollars in investment and thousands of new jobs, but the roads needed to test self-driving cars and carry workers and heavy trucks are falling apart.

Trump’s failure so far to gain traction on the infrastructure issue has not received the same attention as last year’s healthcare failure or the daily chaos at the White House — mainly because he hasn’t done much to push a plan. Yet falling short could have broad consequences in undercutting his economic vision.

“We have a situation in this country and in this town, and one way or another we’ll have to address it,” said Mike Brzoska, president of Chardam Gear Co., which builds gears and assemblies for the aerospace industry.

Brzoska voted for Trump, despite his concerns over global warming, hoping that an experienced businessman could fight for fairer trade and better fiscal policies. His plant is the type of business Trump loves to promote. Its clients include major defense contractors who build Apache helicopters, B-2 bombers and the Patriot missile defense system.

Brzoska doubled his workforce to 135 over the last decade and takes pride in the salaries and health benefits he gives to his employees, who stood with him during a past downturn. He is excited to show off the expanding factory floor, full of the skilled workers needed to cut precise teeth in the cylinders or shave just enough heavy metal off a part to meet specifications.

He is less eager to show off the eight-lane highway, Mound Road, which leads to his plant.

“I don’t want to break your neck,” he says before opening the door to his Jeep. The passenger window has a big crack left by road debris Brzoska encountered earlier in the week.

Then begins a tour full of swerves, bumps and sudden stops. Asphalt crews are everywhere, spreading temporary fill into holes as fast as they can in a sort of never-ending whack-a-mole game. Brzoska points out the old rebar jutting from the crumbling roadway and the cracks between holes that lead to other cracks.

“What do you do with this?” he says at a familiar ditch. “This has been patched two weeks ago.”

From the decrepit road, the signs of economic development are all around — factories, parking lots full of workers’ cars, and warehouses for some of the world’s biggest manufacturers. According to county data, the Big Three automakers have invested $10.3 billion in factories along Mound Road since 2010, after the recession-era bailout of President Obama’s first year. General Motors is testing its self-driving car in one; Fiat-Chrysler plans to begin assembling Dodge Ram 1500 trucks in another.

Brzoska passes a massive Frito-Lay distribution center, a robotics plant for the German company KUKA, a General Dynamics campus and more. Commerce parks and engineering firms feed off this economic ecosystem. An Army command center is home to tanks and armaments, and logistics companies plot transportation grids and move parts.

It all slows down, however, when the heavy trucks and the commuters hit the road.

Hours before Brzoska’s wild drive, the county executive, Mark Hackel, kicked off the latest effort to fix at least part of Mound Road, a $10-million plan that’s considered a stopgap.

Local officials and businesses have proposed a more ambitious plan that depends on nearly $200 million from the federal government to revive 12 miles of crumbling corridor that connects with Detroit, which Brzoska hopes will link with that city’s own rebound. It’s the type of investment Trump encourages — public investment with tangible private-sector benefits.

This is a crucial location for Trump to make good on his talk. Macomb County remains famous politically as the home of the “Reagan Democrats” — blue-collar union members, traditionally Democratic, who became swing voters, leaning Republican in presidential contests. Trump’s ability to win the county, which supported Obama’s reelection in 2012, and others like it, was essential to his surprise electoral college victory.

Policy experts, however, say Trump’s multi-year, $200-billion infrastructure plan, unveiled last month, falls far short of what’s needed for Macomb County and the rest of the nation. The president’s figure is a fraction of the $1 trillion in direct spending he promised during and after his campaign, and would not come close to producing, as he claims, a total of $1.5 trillion by attracting investors for public-private partnerships.

One study using the University of Pennsylvania’s Penn Wharton Budget Model found that the plan might not even add the nominal $200 billion for infrastructure spending, largely because local and state governments might reduce their own spending with an influx of federal money. The study predicted total additional spending of between $20 billion and $230 billion, including the $200 billion in federal funds.

Marcia Hale, a former Clinton White House official who is president of Building America’s Future, a bipartisan group advocating for infrastructure, said of the president’s proposal, “We’re glad to see it introduced because that starts the conversation. It’s just not enough.”

Yet there hasn’t been much conversation either. Since Trump introduced the outlines of his plan last month, he and the Republican-controlled Congress have been preoccupied by debates over immigration, gun violence and trade and tariffs. In any case, Republican congressional leaders have never been enthusiastic about spending a lot of money on public works, and Democrats have been reluctant to give the unpopular president a political victory.

“Infrastructure week” has become a punchline after the White House’s several so-designated attempts to promote the issue were undermined by an off-message president, with incendiary tweets attacking his own Justice Department and the mayor of London, among other targets.

Trump’s budget proposal, released in February along with the infrastructure outline, would eliminate many of the popular grant programs that counties like Macomb were depending on. Among them is the TIGER grant, a popular initiative of the Obama-era economic stimulus program that the county looked to for a major portion of the cost of the Mound Road rebuilding. Though Congress is unlikely to approve such cuts, Trump’s proposals have flummoxed local officials who have been traveling to Washington to lobby.

“It’s confusing,” said Hackel, the Macomb County executive, and a Democrat. “We’re trying to figure out what we are chasing. It’s a moving target.”

While Hackel talks about the leaky sewers and cratered roads over lunch in a popular diner, a pair of men in blue work shirts stop by his table, joking that his phone must be ringing off the hook with constituents angered by such conditions. Hackel smiles and nods, but adds a note of frustration: The county doesn’t have the money to make fixes.

Back in Washington, White House Press Secretary Sarah Huckabee Sanders said the administration is still eager to act, but she acknowledges the president’s plan has been a tough sell in Congress. Also, she added, events including the Feb. 14 school massacre in Florida have distracted all parties. But the president has not retreated from the promise of a $1-trillion investment, Sanders said.

“The difference is Democrats want to raise taxes to do it, and Republicans and this administration want to do more of a public-private partnership,” she said. “We don’t want to just hand out dollars. We actually want to make the system better.”

Here on Mound Road, Brzoska tries to anticipate the bumps, weaving among the broken lanes to spare his passenger. But it’s hopeless, he conceded.