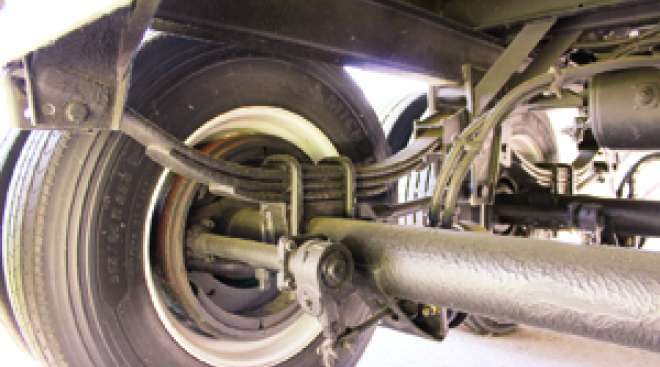 This story appears in the April 11 print edition of E&MU, a supplement to Transport Topics.

Maryland-based Ramar Moving Systems hauls specialty items such as art, satellites and, once, a moon buggy.

With that kind of sensitive cargo, it’s important that the suspension offer the smoothest ride possible. Founder Howard Levine said that in the 1970s, a client installed a seismograph on trailers to test whether air ride or leaf spring suspensions performed better on the Capital Beltway. There was a clear difference: Air ride was better, and it’s all he uses.

But not all motor carriers agree. Truckload and intermodal carrier Schneider, for example, uses leaf spring suspensions almost exclusively. Meanwhile, other carriers use both, depending on the job.

The two suspensions differ in how they absorb road impact. Leaf spring suspensions use layers of strips known as a leaf pack that are attached to the trailer frame. Air ride suspensions cushion the shock using valves, air lines and air spring bags. The same air compressor for the truck’s braking system supplies air to the bags, which act as springs.

Malea Still, vice president of development and sustainability for Arkansas-based CalArk International, said her company uses air ride equipment on its tractors because most of her drivers prefer them. Many drivers said they felt more fatigued operating over leaf springs because of the jarring and movement of the cab on the road.

As with many fleets, Schneider considered making the switch to air ride trailer suspensions in the 1990s when many customers began asking about it, said Steve Duley, vice president of purchasing for the Green Bay, Wisconsin, carrier. But unlike others, Schneider never made the change. A big reason is that Schneider does a lot of trailer-on-flatcar intermodal, which Duley said is not a good fit for air rides because the entire suspension hangs when lifted, and railroads often reject them.

With customers continuing to ask, however, Schneider did its own field testing in 2000. Technicians installed instruments on tractors and trailers and conducted vibration and acceleration tests with weights of 10,000, 30,000 and 40,000 pounds, using both leaf spring and air ride suspensions. The tests found that ride quality in the front of the trailer depended on the tractor suspension. At the rear of the trailer, leaf spring suspensions actually provided a better ride quality in most circumstances. Duley said air rides are superior when the trailer is empty or lightly loaded, but those situations are rare.

“Were we breaking freight? Did we have claims? We really never had any evidence,” he said. “It was more just anecdotal, discussion-type topics where people had the perception that air ride was superior, but the facts really never supported that.”

Schneider has about 30,000 trailers. Duley estimated that fewer than 100 have air ride suspensions, and those have come from acquiring dedicated fleets. He said air ride trailers cost an additional $1,000. The company’s tests found that while leaf spring suspensions can last the life of the trailer, air ride suspensions are more likely to require replacement and are more prone to failure. He thinks maintenance is more difficult on air rides.

The carrier’s tank division believes that air ride suspensions are more subject to rollovers. Meanwhile, leaf spring suspensions are about 100 pounds lighter, which helps offset the weight caused by trailer additions such as skirts.

Jim Rushe, senior program manager at Hendrickson, which produces integrated truck and trailer suspensions, said his company has used only air ride components for at least 30 years because they offer a smoother ride. The reduced shaking is better for lights, fasteners and doors. Gasoline haulers want their tank trailers to last 25 years. To do that, they need an air ride, he said.

Rushe also disputed the notion that air ride trailers have more maintenance hassles. He said that while leaf spring suspensions must be retorqued, air ride suspensions require only visual inspections. On air ride suspensions, the most likely part to be damaged is the shock absorber. The company’s new zero-maintenance damping eliminates that part. And while air rides are more expensive upfront, he said, they have higher resale values, so “you’re going to get it back when you do a trade-in.”

Tom Hastings, founder of Nebraska-based Transportation Specialists Ltd., uses both types of suspensions. Most of the intermodal carrier’s containers use leaf springs. However, there are situations where air ride is clearly better, he said. If the carrier is hauling 15,000 pounds or less and it’s going to be a rough ride, air ride suspensions make a difference, he said.

TSL uses air ride suspensions when hauling boxed meat bound for Japan. Those 1,700-mile hauls to the West Coast are a long distance, and he wants to minimize shifting.

Xtra Lease offers its clients a mix of leaf spring and air ride trailers. Steve Zaborowski, senior vice president at the company, said many refrigerated shippers use air ride suspensions, as would shippers without adequate packing such as household movers. On flatbeds, the company typically uses a spread-axle configuration, which he said works better with air rides.

“That is the configuration that a very large proportion of the flatbed customer base wants,” Zaborowski said.

But he said fewer dry van shippers are demanding air rides because cargo damage has been reduced thanks to improved product packaging, cargo security and pallet configuration. After freight has traveled across the ocean and on rail on leaf spring intermodal carriers, it’s hard to see how leaf spring trailers could be a major cause of damage, he said.

“Many customers, a big portion of them, have swung back, and there’s at least in our estimation more than 50% of dry van production today is in the [leaf spring] configuration,” he said. He estimated that, six or seven years ago, 80% to 85% of trailers sold had air ride suspensions. “I can tell you this with certainty that several of the largest grocery chains and truckload carriers in the United States are standard on [leaf spring] trailers,” he said.