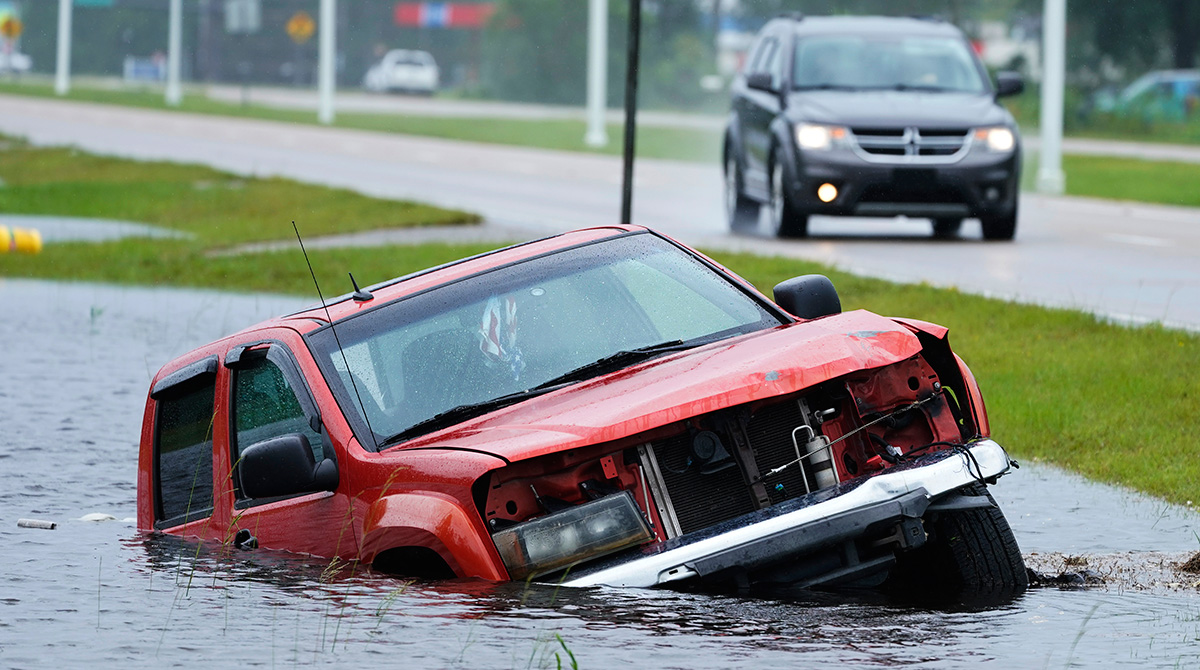 An abandoned vehicle is half submerged in a ditch next to a near flooded highway in Bay Saint Louis, Miss. (Steve Helber/AP)

WASHINGTON — With more than 1 million customers in Louisiana and Mississippi having lost power, Hurricane Ida is sure to take a toll on the energy, chemical and shipping industries that have major hubs along the Gulf Coast. But the impact on the overall U.S. economy likely will be modest so long as damage estimates don’t rise sharply and refinery shutdowns are not prolonged, economists say.

The hurricane is expected to inflict a less severe financial impact than Hurricane Katrina did 16 years ago, thanks in part to a lower storm surge and New Orleans’ improved levee system. Analysts at Boenning & Scattergood, a financial consultancy, noted that Ida’s wind-field is smaller than Katrina, which likely narrows the area of catastrophic damage. The analysts estimated that losses for the insurance industry will hit around $10 billion, far less than the $90 billion-plus in insured losses from Katrina.

Oil prices barely moved Aug. 30 as oil companies and refiners assessed any damage from the storm. The price on the New York Mercantile Exchange was flat at $68.74 per barrel. Gasoline futures rose 1.2%. 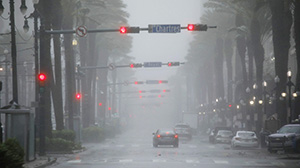 Still, Ida, which tied for the fifth-strongest hurricane ever to hit the mainland, left so many customers without electricity that any prolonged power outage could have repercussions, at least temporarily, for the oil, natural gas and chemical companies that have major operations along the gulf. The longer power remains out, the longer those companies will struggle to restart their operations.

The hurricane downed a major transmission tower in Jefferson Parish along the Mississippi River, sending wires into the river, causing widespread outages and halting river traffic, said Joe Valiente, director of emergency management for the parish. Those lines supplied power to the New Orleans area.

Valiente told NPR that the entire power grids collapsed in about 10 parishes and that it could take six weeks to fully restore power.

An estimated 96% of oil production and 94% of natural gas production in the Gulf remain shut because of Ida, according to the U.S. Department of Energy. Nearly 300 manned oil platforms and drilling rigs were closed and evacuated. At least nine oil refineries in the region also have been shuttered, representing 13% of the nation’s total refining capacity. Several pipelines also are shut down as a precaution.

The service disruptions aren’t expected to immediately affect the availability of gasoline nationally, though, because of ample fuel reserves in the system, the department said.

For now, the ports of Baton Rouge, Gramercy and Morgan City in Louisiana and the Port of Pascagoula in Mississippi are closed. The Louisiana Offshore Oil Port also has suspended operations. The Port of New Orleans was closed Aug. 30 but reported that “initial reports indicate no major damage to our facilities.”

Early indications are that refineries along the Gulf Coast were spared the kind of damage that was inflicted upon them during Hurricane Harvey in 2017, which caused flooding that inundated several refineries in the Houston area.

But Clearview Energy Partners analyst Jacques Rousseau cautioned, “We need to wait a little longer to see if there is some sort of extensive damage that could take a refinery out for more than just a shutdown-and-restart period.” 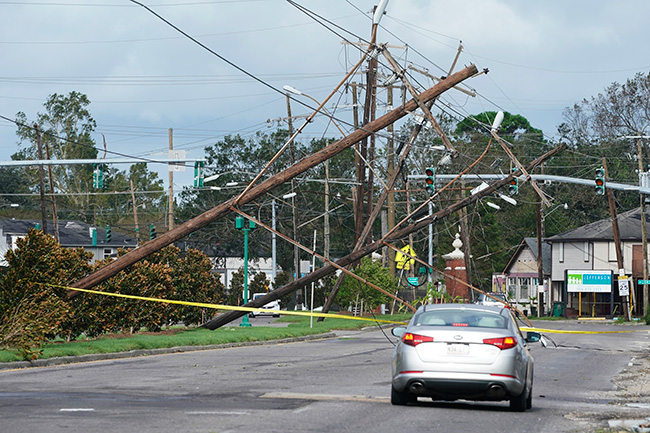 Over the weekend, Phillips 66 closed a refinery in Belle Chasse, La., and ExxonMobil began shutting down production at a refinery in Baton Rouge, La. On Aug. 30, an Exxon spokeswoman said the refinery didn’t sustain significant damage and would begin restoring normal operations once the company knows it will have raw materials and power.

All of New Orleans lost power the evening of Aug. 29 as the hurricane barreled ashore. Gov. John Bel Edwards’ office said damage to the power grid appeared to be “catastrophic, and local officials warned that it could take weeks to fully restore power. As the storm approached, offshore oil production in the Gulf was nearly entirely shut down, and crews were evacuated as a safety precaution. Exxon said it was surveying offshore platforms to assess any damage.

The hurricane and the resulting disruptions to offshore production and onshore refining are occurring just as demand for gasoline and other fuels is likely to decline, as it typically does in September and October. That trend, if it holds, could lessen the storm’s effect on prices.

Most natural disasters cause little overall damage to the $23 trillion U.S. economy. Even the hardest hit regions often recover quickly, thanks to all the money spent on the rebuilding from the destruction.

Still, New Orleans’ job market never regained its strength after Hurricane Katrina. In July 2005, the month before the hurricane struck, the New Orleans metropolitan area had more than 620,000 jobs. It lost 185,000 in September and October that year as people fled the flooded city. Many never returned.

Since then, New Orleans’ recovery has been disrupted by the Great Recession of 2007-09 and COVID-19, which crushed an economy that depends on tourists. In July, New Orleans had 530,000 jobs, down nearly 15% from its level before Katrina. Over the same period, employment across the United States has risen 9%.

Houston fared better after Hurricane Harvey dumped more than 4 feet of rain on the metro area in August 2017. It lost just 8,800 jobs in the immediate aftermath of the deluge. By October, it had recovered all of them — and more.

On a national scale, Mark Zandi, chief economist at Moody’s Analytics, said the disruptions caused by Ida likely will lead him to downgrade his forecast for annual U.S. economic growth in the current July-September quarter by a few tenths of a percentage point. But that economic loss, Zandi said, could be reversed in the final quarter of the year as a result of the rebuilding from the hurricane’s damage that likely will follow.

DO NOT DRIVE! Crews are working to open the roadways for emergency responders.

Analysts at Citi Investment Research agreed that any drag on growth likely will be offset by subsequent reconstruction. They cautioned, though, that “inflationary effects may be more persistent as demand for building materials, autos and workers will confront already existing shortages.”

“The key channel for Ida to impact the broader economy is through energy prices,” Zandi said. “We will have to see how much damage occurred to production in the Gulf and how long that production will stay off line.”

A brief spike in gasoline prices could result, Zandi said, because of the production shutdowns.

“The worst-case scenario is Ida might add 10 cents to 20 cents to the price of a gallon of gas through September,” he said. But he suggested that the increase in pump prices might last for only a few weeks.

Brian Bethune, an economist at Boston College, cautioned that gas price increases could be more severe depending on how long the production shutdowns last and whether other regions have alternative supplies. He noted that after the hack of the Colonial Pipeline earlier this year, some states saw prices rise sharply as service stations ran out of gas.

Chemicals and plastics companies located in the region also shut down, but analysts at Citi said the U.S. chemical industry can withstand summer storms better provided there is no sustained flooding that inflicts damage on electrical stations.

Robert Handfield, a professor of supply chain management at North Carolina State University, said he worries that disruptions at petrochemical plants will cut off supplies to plastics factories, which still are struggling to recover from a February deep freeze in Texas and other supply chain bottlenecks.

“They’re already behind where they should be,’’ Handfield said. “The inventories are pretty scarce.”

If damage from Ida “hits the petrochemical facilities, we’re in real trouble,” he added. “We’ve already got shortages across the board.”

As for oil refiners, Handfield said, “Once this thing gets through, they’ll bring people back and assess the damage, and we’ll know.’’