DTNA Pushes Ahead With Automated Driving, Other New Technology on Flagship Cascadia 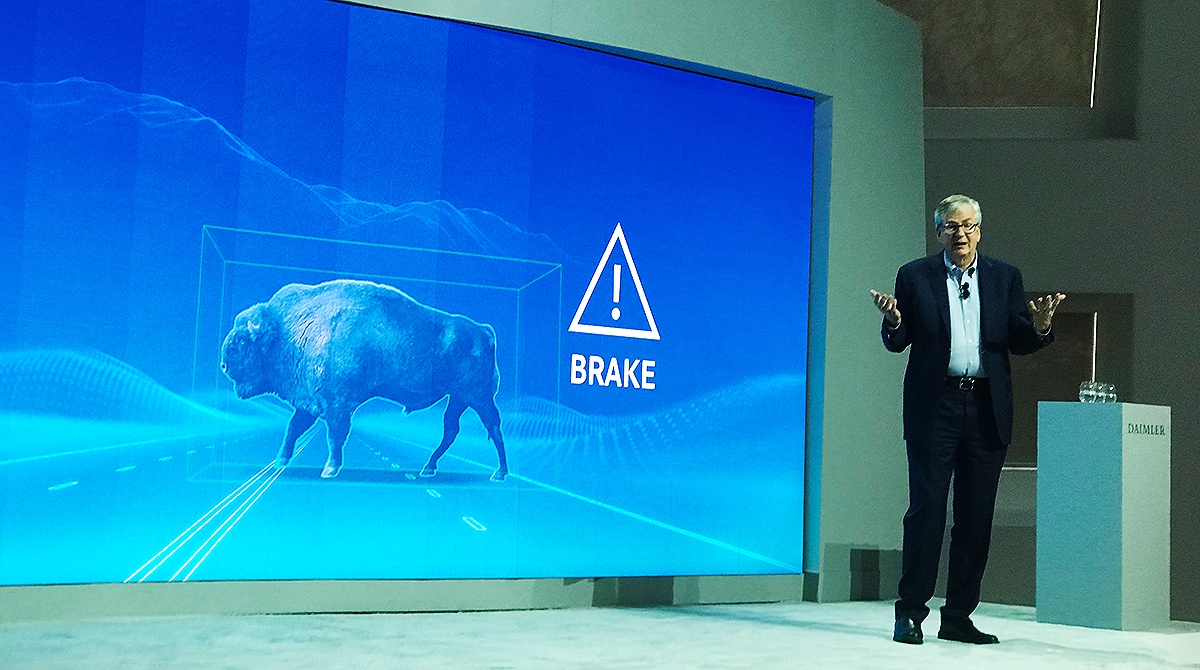 The truck maker also announced fuel efficiency improvements to the diesel-powered Cascadia, and an upgraded version of its Detroit Assurance advanced driver assistance system, including active brake assist. And the media got its first chance to drive DTNA’s emerging electric trucks. 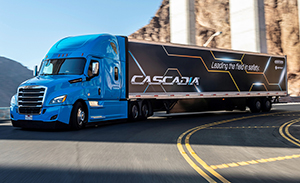 “We are still here because we have reinvented ourselves over and over,” said Daimler Trucks CEO Martin Daum. He spoke at a Daimler event here Jan. 7, the day before the opening of the annual Consumer Electronics Show.

Level 2 automation means the truck, with a driver in the cab, is capable of independent steering, accelerating and braking. The Detroit Assurance 5.0 platform makes partially automated driving possible in all speed ranges for the first time thanks to the fusion of radar and camera information, according to the truck maker.

With lane departure protection, if the truck begins to drift without the turn signal engaged, the system gives an auditory and visual warning and steers the truck back into its lane.

Lane keep assist supports the driver by using micro-steering movements to keep the new Cascadia centered in its detected lane.

The first orders for trucks with the Level 2 package will come from customers in the backlog now, “because, frankly, we are already sold out [for 2019] so we will give them the option to add it in,” DTNA CEO Roger Nielsen told Transport Topics.

During CES, fleet customers who represent “probably 30% of our volume” were scheduled to drive the Level 2 Cascadia, Nielsen said.

Detroit Assurance 5.0, without the pair of Level 2 enhancements, is standard on each new Cascadia. One of its new features is active brake assist, a camera and radar technology that can deploy full braking after detecting moving and stationary vehicles, people and objects in the path of the truck. 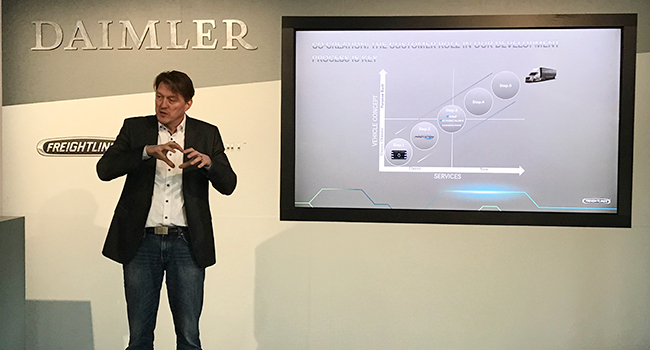 Another standard feature is adaptive cruise control that operates down to zero miles per hour.

Another is a radar-based system to detect objects and people in the passenger-side blind spot for the tractor and a full-length 53-foot trailer. It delivers an audible and visual warning.

Meanwhile, Daimler intends within a decade to have a self-driving Level 4 truck, which “has no driver on board, at least in certain conditions,” Daum said, and will operate a prototype truck in the United States this year.

We're between seasons on RoadSigns but have created an intersession season as we christen 2019. In Episode 2, we ask: Is Trucking Charging Toward an Electric Reality? Could what’s happening at the ports of Southern California have consequences for the way the rest of the nation experiences an electric future? Listen to a snippet above from Volvo's Keith Brandis, and get the full program by going to RoadSigns.TTNews.com.

“Level 4 trucks will have a significant increase in safety,” using a multitude of sensors and systems, and thorough redundancy, Daum said. “The majority of highway accidents are due to human error.”

Level 4 trucks are the only way to “cope with the growth in freight,” which is expected to double globally by 2050, he added. Optimal runs for a Level 4 truck include hub-to-hub routes. “We can run those trucks around the clock.”

The United States is a prime environment for Level 4 trucks, he said, due to excellent infrastructure, homogeneous traffic with very similar speed limits for cars and trucks and lengthy travel distances.

DTNA is in discussions with 35 states on the topic of automated trucks.

At the same time, DTNA announced upgrades to its diesel-powered Cascadia that make the truck 35% more fuel efficient than when it was launched in 2007.

A day earlier, at the Las Vegas Motor Speedway, DTNA let reporters, for the first time, drive prototypes of its medium-duty eM2 and Class 8 eCascadia models.

Behind the wheel of the eCascadia, it is hard to tell just by ear if the truck is running. There is no shifting through gears as it accelerates smoothly and silently — it has two e-axles and electric motors at the wheel hubs. As the truck, pulling a fully loaded trailer, takes the corners and heads down the straightaway, there is the expected agility and power, but engine noise is missing. In the cab, driving is peaceful.

The eM2 offered a similar sense of a brand new experience for commercial vehicle drivers.

DTNA reiterated it would begin production in 2021 of medium- and heavy-duty battery electric trucks that are now being developed in close cooperation with select North American customers.

In related news, Daum reported Daimler Trucks had not been able to achieve expected fuel savings in real-world tests of truck platooning and would not “prioritize the technology going forward.”