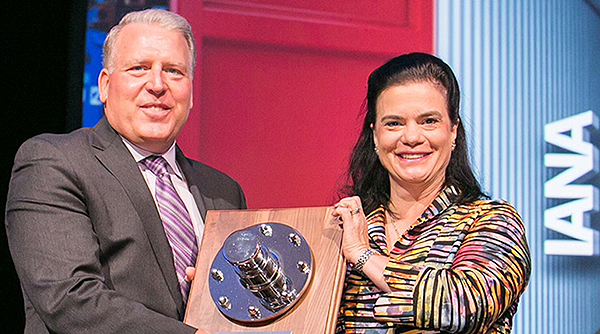 “I’m keenly aware that although this is an individual award, there are a number of teams of people that have made me successful,” Manning said, adding that the honor meant more because it was presented by his peers. “I feel like all I’ve done for the last 30 years is show up and speak up for the intermodal community.”

Manning has a long history of service to intermodal groups, including the Tennessee Trucking Association, IANA and ATA, Bailey said. He has served as a past IANA chairman and served on the IANA board for nine years.

In a press release, ATA President Chris Spear congratulated Manning. “Dave’s tremendous leadership — both at ATA and with IANA — has impacted the intermodal industry in an incredibly positive way,” Spear said. “From his work at our Intermodal Carriers Conference and in establishing the North American Chassis Pool Cooperative, Dave has been a visionary for our industry.”

Bailey told attendees Manning served for more than a decade on the UIIA committee, which created the only standard industry contract that outlines the rules for the interchange of equipment between intermodal trucking companies and equipment providers. UIIA stands for the Uniform Intermodal Interchange and Facilities Access Agreement.

Manning also was one of the founders of the North American Chassis Cooperative. 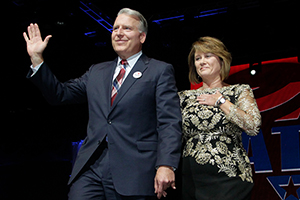 Manning, a third-generation trucker, originally planned to be an orthodontist but started working on the loading docks at his uncle’s trucking company and was hooked. After college, he joined his uncle’s company as a dispatcher.

“Two years after I started in the trucking industry, deregulation occurred, and it wasn’t kind to my uncle’s companies,” Manning said.

He joined Nashville-based TCW in 1985 and became president in the early ’90s. Manning said supply chain partners have to work together to drive inefficiency out of the supply chain, not just push it from one partner to another.

“Working together, we can improve driver productivity and ensure the intermodal segment is the first segment of choice for drivers, not one they run from,” Manning said.

During the event, Bailey also presented the Chairman’s Award to Martin Summers, general manager of maintenance administration at Consolidated Chassis Management, in recognition of his service to the association and the intermodal industry.

Summers led a task force that focused on maintenance best practices, releasing 353 recommended practices in May.

“Speaking on behalf of the task force,” Summers said, “we believe this guide will transform our industry.”