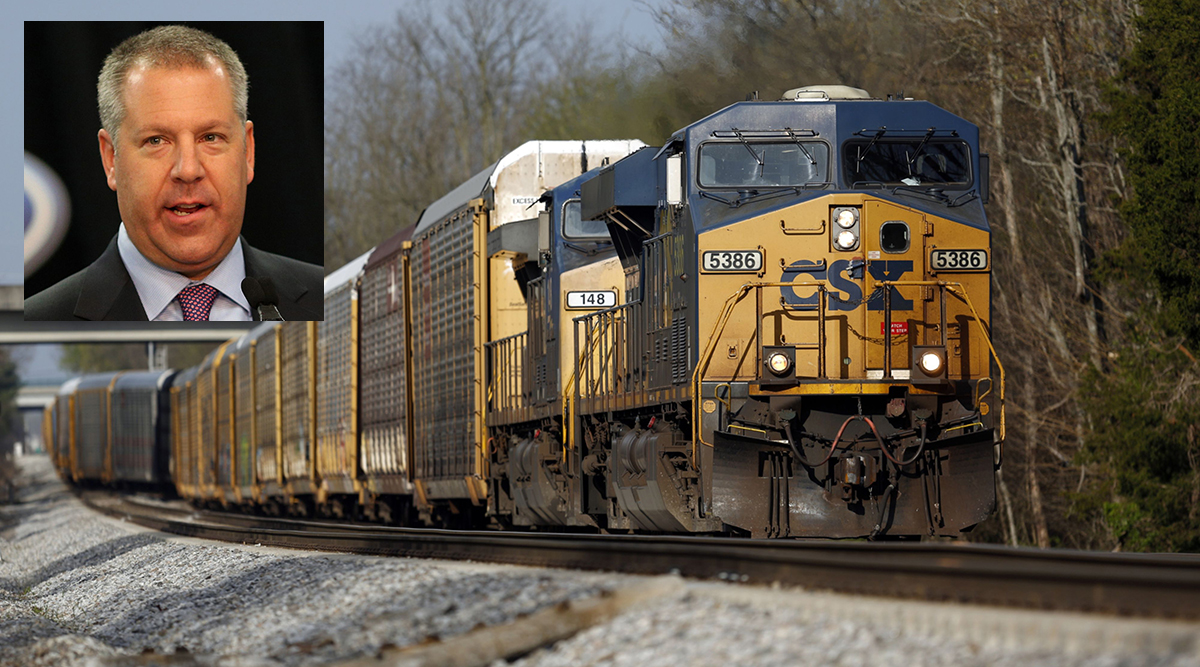 A CSX freight locomotive with an inset of Joseph Hinrichs. (Luke Sharrett/Bloomberg News)

CSX Corp. named Joseph Hinrichs as its next chief executive officer, handing the reins of the railroad giant to a car guy.

Hinrichs, a former top executive with Ford Motor Co., will take over as CEO for James Foote on Sept. 26 as part of a planned succession process, CSX said Sept. 15 in a statement. The departing boss, who also is leaving the board, will continue to work as an adviser through March 31 to help with the transition.

The new job marks a shift for Hinrichs, who had been a rising star in the car industry. As the former automotive president of Ford, he was seen as a possible candidate for the company’s top post before abruptly stepping down in early 2020, shortly before Jim Farley became CEO.

In an interview, Hinrichs said CSX reached out to him several months ago and after meeting with each board member and spending significant time with Foote, he determined it was “a great match and a great fit for me.”

“I had the benefit of being a customer of the rail industry for many years,” Hinrich said of his decades of shipping cars by rail. “So I get to ask questions from a customer’s perspective as I come into this role, which I think can be helpful.”

Hinrichs said he awoke the morning of Sept. 15 to a text telling him the labor dispute had been settled. “Timing is everything,” he said, with a laugh. He plans to spend his first 100 days traveling to meet with workers and heal any lingering divisions. 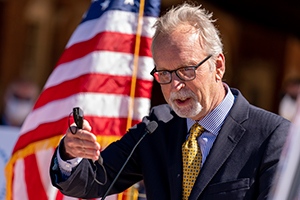 “It was very helpful for Ford and for me personally to have had the relationships I had with the UAW and Unifor,” Hinrichs said of the auto industry’s two major labor unions. “I look forward to building those relationships with the labor leaders in the rail industry. It’s a little more complicated — 12 different unions.”

The intervention of President Joe Biden to avoid a labor disruption underscores the rail industry’s essential role in moving more than 40% of the longhaul shipments in the U.S., Hinrichs said.

“What a great opportunity to remind people how important the rail industry is to our economy,” Hinrichs said. “With what’s going on in the world — a high inflationary environment, increased cost for people, congestion, infrastructure work needed on the highway system, truck driver shortages — here we are. We can actually take on more of that work.”

While at Ford, Hinrichs played a key role in the company’s investment in electric truck startup Rivian Automotive Inc. and served on the startup’s board. Since Hinrichs left, the automaker canceled plans to jointly build an electric vehicle with Rivian and reduced its stake in the startup.

Hinrichs also championed the revival of the Bronco sport-utility vehicle at Ford and recommended the company broaden the lineup with a compact version of the rugged off-roader. But he ultimately lost out to Farley in the race to lead the company after the launch of the Explorer SUV in 2019 was marred by manufacturing and quality problems.