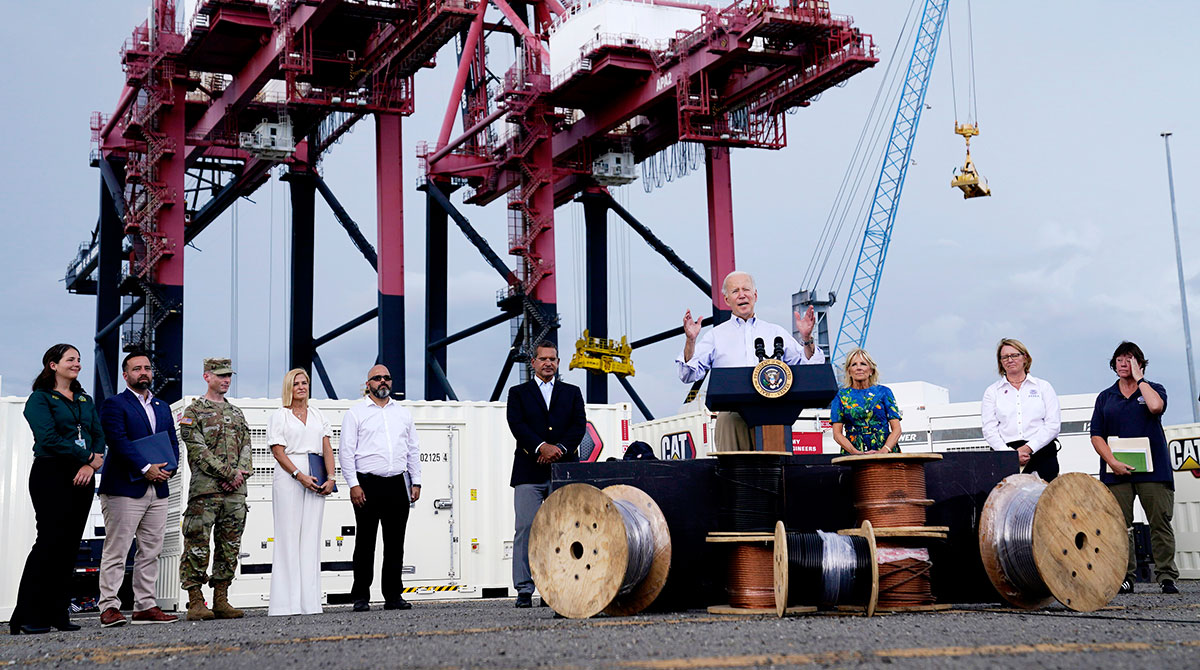 At a time when Congress and the White House are focused on improving the flow of freight nationwide, the lawmakers argued waiving the law could weaken the domestic maritime supply chain.

Sen. Roger Wicker (R-Miss.), ranking member on the Commerce Committee on trucking policy, was among those who criticized the Department of Homeland Security’s waiver specific to petroleum products shipped to the U.S. territory soon after Hurricane Fiona.

"We are concerned that these waivers were both unlawful and unjustified….”

“Both waivers were issued for vessels that had already left port and were [en] route to Puerto Rico, sending a direct signal to foreign companies that our current political leadership is willing to suspend traditional norms and bipartisan support for the American maritime industry during times of crisis,” the senator continued.

On the House side, the bipartisan leadership of the Transportation and Infrastructure Committee echoed Wicker’s sentiment. Committee Chairman Peter DeFazio (D-Ore.), ranking member Rep. Sam Graves (R-Mo.), as well as their colleagues, questioned the administration’s move.

“We write to express our concerns and disappointment with your recent decision to grant Jones Act waivers for the delivery of fuel to Puerto Rico including to allow the delivery of diesel that was sourced from the mainland United States by British Petroleum Products North America to Puerto Rico on a foreign vessel,” the House lawmakers wrote to Mayorkas and Transportation Secretary Pete Buttigieg.

“We concur with the Maritime Administration,” they continued, “that consideration of a waiver while a vessel is already underway is ‘novel and problematic’ and would like to better understand the reasoning for your decision to issue a waiver for a company that appeared to be gaming the Jones Act waiver process.”

To address Puerto Rico’s immediate needs as they recover from #HurricaneFiona, Secretary Mayorkas has announced the approval of a temporary and targeted Jones Act Waiver.

Joining DeFazio and Graves on the letter to the secretaries were Reps. Salud Carbajal (D-Calif.) and Bob Gibbs (R-Ohio), chairman and ranking member, respectively, of the Coast Guard and Maritime Transportation Subcommittee. They added: “We are concerned that this waiver was sought to take advantage of the vulnerable people of Puerto Rico.”

On Sept. 28, Mayorkas announced the department’s approval of a Jones Act waiver. The waiver, the secretary indicated, served as an aspect of Puerto Rico’s emergency response soon after Hurricane Fiona.

“In response to urgent and immediate needs of the Puerto Rican people in the aftermath of Hurricane Fiona, I have approved a temporary and targeted Jones Act waiver to ensure that the people of Puerto Rico have sufficient diesel to run generators needed for electricity and the functioning of critical facilities as they recover from Hurricane Fiona,” the secretary said. “The decision to approve the waiver was made in consultation with the departments of transportation, energy and defense to assess the justification for the waiver request and based on input from the governor of Puerto Rico and others on the ground supporting recovery efforts.”

In further outlining its hurricane recovery response in September, the White House explained the Jones Act waiver was designed to allow 300,000 gallons of “much-needed diesel fuel to be discharged to Puerto Rico.”

“The administration continues to urge all petroleum refiners to help ensure Puerto Rico has adequate fuels supplies, and to use Jones Act compliant vessels whenever possible,” according to the White House.

Hurricane Fiona affected U.S. territories in the Caribbean in mid-September. The Jones Act, a 1920 law, requires American vessels to be used in the transport of goods between U.S. ports.