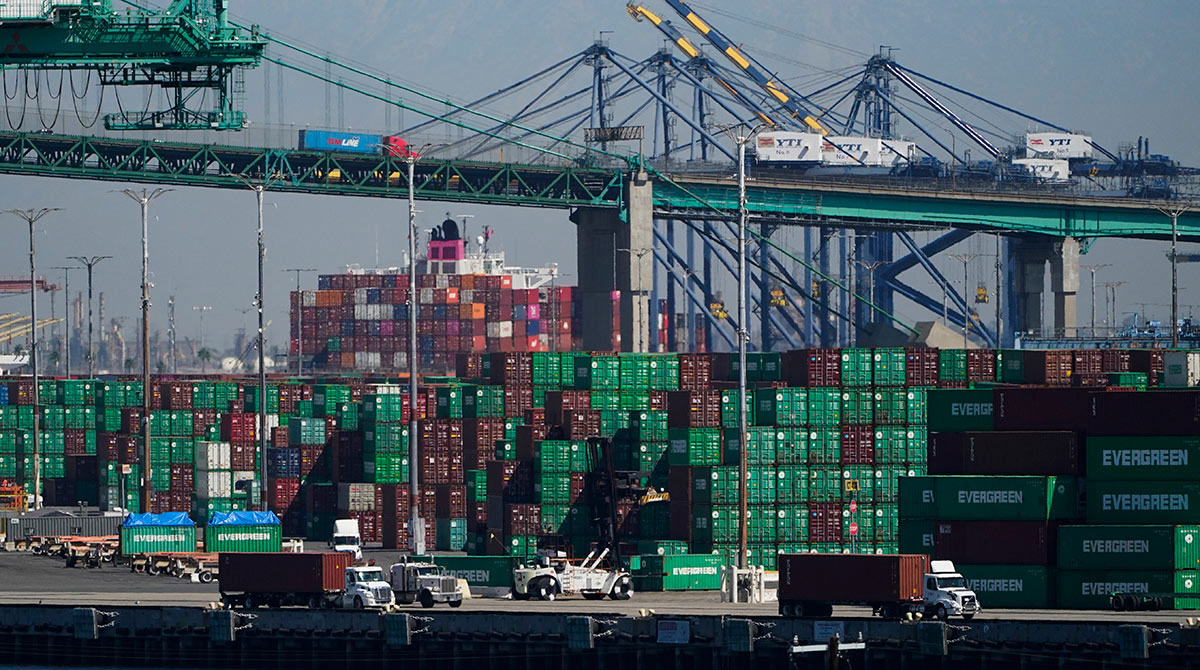 Containers are stacked at the Port of Los Angeles. (Jae C. Hong/AP)

The top Republican on the U.S. House Transportation and Infrastructure Committee called on the White House to brief his colleagues on the Biden administration’s strategy for implementing a $1 trillion infrastructure law.

Biden signed the legislation into law in November.

“While I am aware that your task force has engaged in various media events and outreach to governors and mayors, you have yet to fully engage all relevant members of Congress on these matters. In particular, I am most concerned about how the United States Department of Transportation plans to work with the task force to properly implement the law,” Graves wrote this month.

He further emphasized, “Communication is critical to effective implementation of IIJA, and key members on the committee on Transportation and Infrastructure have not received information on any of the task force’s efforts.”

While Graves and his Republican colleagues on the transportation committee endorsed policies meant to improve freight and passenger connectivity, they largely opposed certain climate change and transit provisions included in the infrastructure law.

As Biden touted the law’s enactment and his administration’s COVID-19 response during his first year in office, congressional Republican leaders kept up their criticism of the White House. They took aim at the economy and supply chain bottlenecks at commercial ports. Republicans are positioning themselves for a return to the majority in Congress.

“In one year, President Biden has turned our country back with soaring costs, empty shelves, punishing mandates and a weakened America,” said House Minority Leader Kevin McCarthy (R-Calif.). “Democrats in Congress have stood by and done nothing for the American people. Americans aren’t just frustrated, they are fed up and looking for change and an optimistic vision. We must end one-party rule in D.C. and get back to policies that get us off this destructive path and back to American prosperity.”

Sen. John Thune of South Dakota, a member of the Senate’s Republican leadership team, echoed McCarthy’s sentiment: “The inflation is at a 40-year high. A lot of that has to do with supply chain issues that could have been solved if the president would be willing to take on some of his entrenched special interests.

“But, generally speaking, if you look at where gasoline prices are this year relative [to] last year, you’ve seen a massive runup in fuel prices, which affects every American’s pocketbook.”

To tackle supply chain woes, House Democratic leaders recently introduced a so-called competitiveness bill that would authorize $45 billion in grants, loans and loan guarantees meant to enhance freight connectivity and establish a Commerce Department post tasked with monitoring the movement of goods along commercial corridors. The legislation awaits consideration in the chamber.

“House Democrats will not sit back and let China and other competitors out-research, out-innovate and out-build us in the 21st century,” said Majority Leader Steny Hoyer (D-Md.). “This bill will help secure our supply chains, ensure the microchips and semiconductors that have become vital in an increasingly digital world are made here in America, promote the advanced research to fuel an entrepreneurial spirit that is the envy of the world, and expand career apprenticeships to prepare our workers for jobs they will create.”

Last summer, the Senate advanced its version, titled the U.S. Innovation and Competition Act, or USICA.

For its part, the Biden administration set up a task force to assist the private sector with resolving supply chain bottlenecks. As part of that effort, the U.S. Department of Transportation announced more than $241 million in federal grants for port projects. The grants targeted facilities in 19 states to facilitate freight connectivity.

As Transportation Secretary Pete Buttigieg explained: “These investments in our nation’s ports will help support American jobs, efficient and resilient operations, and faster delivery of goods to the American people.”