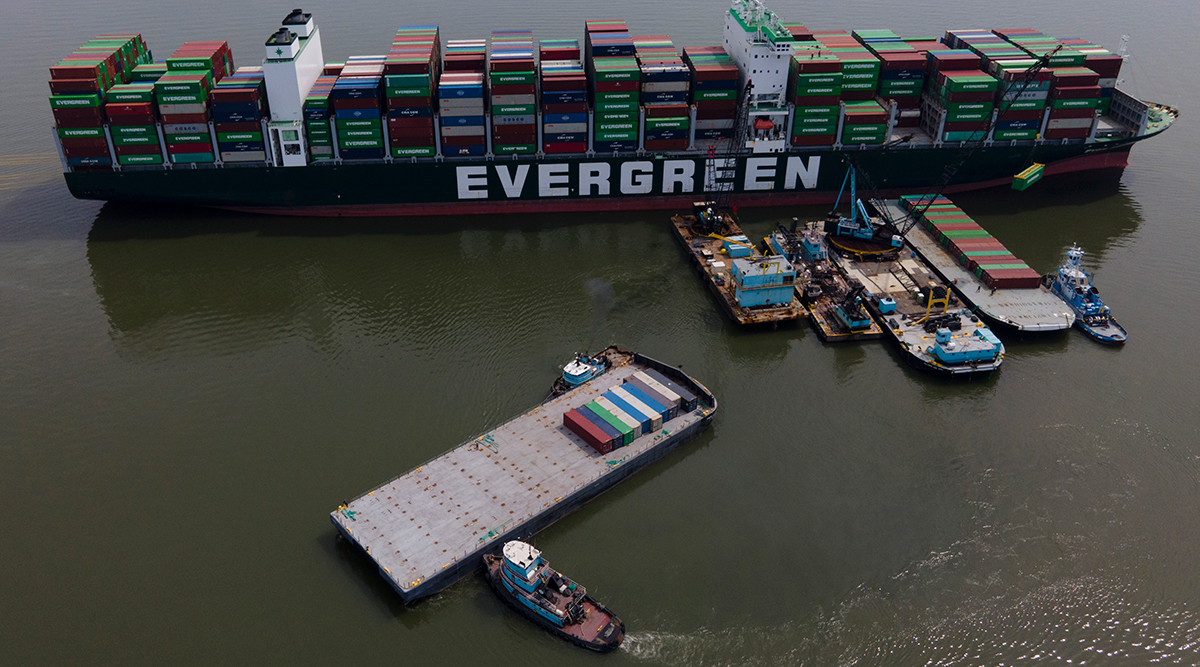 Tugboats, bottom, align a barge near the container ship Ever Forward, top, which ran aground in March 2022 as workers remove containers from it in efforts to lighten the load and refloat the vessel. (Julio Cortez/Associated Press)

A Coast Guard investigation into the grounding in March of a cargo ship in the Chesapeake Bay faulted the pilot tasked with helping the ship navigate the waterway, saying he relied too much on one piece of equipment to navigate and was on his cellphone in the runup to the grounding.

In a news release Dec. 6 the Coast Guard specifically cited “the pilot’s failure to maintain situational awareness and attention while navigating, and inadequate bridge resource management.” A more detailed report described the lead-up to the moments when the Ever Forward ran aground March 13 north of the Chesapeake Bay Bridge while it was traveling from the Port of Baltimore to Norfolk, Va.

It took authorities a little over a month to dislodge the Taiwan-based containership — longer than three football fields — from the muddy bottom of the Chesapeake Bay.

In the detailed report, the Coast Guard said they didn’t find mechanical issues or equipment failures but instead painted a picture of a pilot tasked with guiding the ship who was frequently on his phone in the lead-up to the grounding. While a ship is captained by a “master,” pilots are often the ones who guide ships through specific passages like a river or bay where they have knowledge of the waterways. A Maryland State Pilot was on board the Ever Forward.

In a statement Dec. 6, the Maryland Board of Pilots also said that they were suspending the pilot’s operating license.

“Bay pilots control of vessels is required practice within Chesapeake Bay,” the company statement said, noting that the pilot was assigned to the ship and “... in control of the vessel at the time of the incident. He is not now and has never previously been an Evergreen employee, therefore we cannot provide additional comment regarding the suspension of his license.”

According to the investigation, the pilot placed or received five phone calls from his personal phone after they left the dock, including one that lasted nearly an hour. He also sent two text messages during a “critical time period” before a turn south should have been executed.

“Had Pilot 1 refrained from drafting email correspondence, and placing and receiving personal or non-urgent professional calls, it is possible he would have maintained better situational awareness and properly executed the turn in a timely manner, avoiding the vessel grounding,” according to the report. 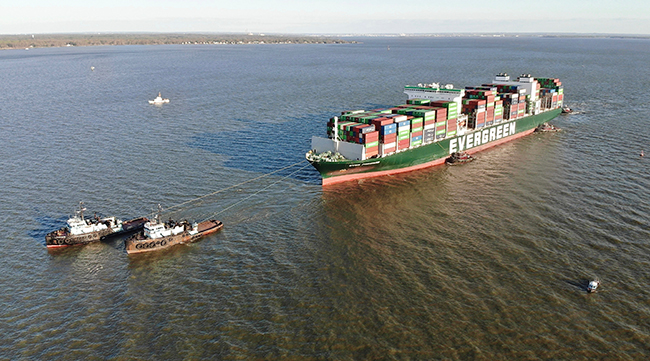 The U.S. Coast Guard, Maryland Department of the Environment and Evergreen Marine Corporation, in partnership with multiple state and local responders, refloat the Ever Forward on April 17 in Chesapeake Bay. (George Mason University Department of Police and Public Safety/U.S. Coast Guard via AP)

The investigation also found that the pilot only used one piece of equipment — his Portable Pilot Unit — to navigate the vessel and did not use any of the ship’s charts or equipment or navigational buoys that marked the channel’s southern turn. The report said that if the pilot had used “all available means to determine the ship’s location, the grounding likely would not have occurred.”

Cultural differences might have also played into the grounding. The report said other crew members on the bridge during the run-up to the grounding saw that the pilot was “frequently on his cellphone and appeared agitated.” At one point, one officer, a Chinese national, thought the ship had missed where they were supposed to turn, but instead of telling the pilot directly the officer repeated the heading multiple times as a way to nudge the pilot.

The ship became stuck outside the shipping channel and did not block marine navigation, unlike last year’s high-profile grounding in the Suez Canal of its sister vessel, the Ever Given. That incident disrupted ship traffic and the global supply chain for days.