As Car-Lot Inventories Dwindle, Sales Take a Turn for the Worse 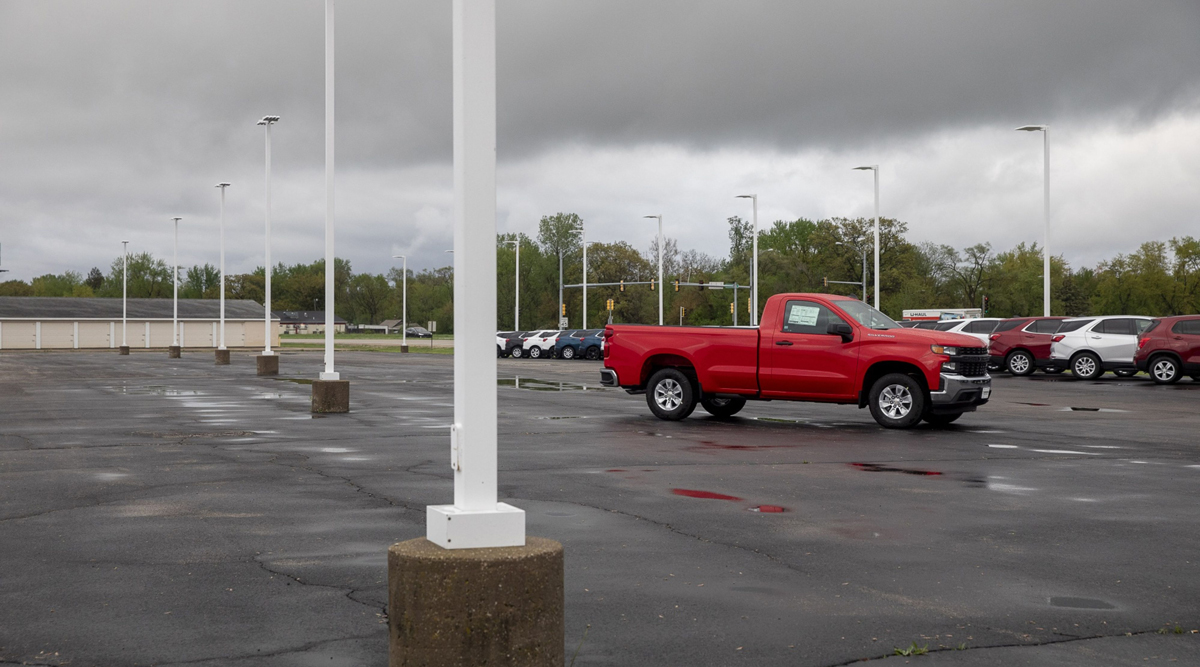 A pickup truck sits at a dealership in Illinois in May. (Daniel Acker/Bloomberg News)

“I’ve never seen anything like this in my 40-some years in the automobile business,” said Ricart, who also sells Nissan Motor Co. and other brands at his Columbus, Ohio, dealership. “The Ford F-Series is in huge short supply. Everything is. I don’t care if it’s imports, or domestics, or luxury cars — they all are.”

The global semiconductor shortage that hobbled auto production worldwide this year is leaving showrooms with few models to showcase just as U.S. consumers breaking free of pandemic restrictions are eager for new wheels.

“People are emotional right now about buying vehicles because they’ve been locked up in the house for the past year,” Ricart said.

With dwindling inventory over the last three months, U.S. auto sales have taken a sharp turn for the worse. From a near-record annual pace of 18.6 million vehicles in April, sales slowed to a 17.1 million rate in May and fell to 15.7 million in June, estimates Emmanuel Rosner, an analyst with Deutsche Bank.

Automakers, which are scheduled to release second-quarter sales July 1, say the inventory crisis is nearing rock bottom and expect the flow of essential chips to increase in the year’s second half.

But that’s far from certain and some analysts say dealer lots won’t be fully restocked until 2023.

“Inventory is the story,” said Michelle Krebs, executive analyst for AutoTrader, a unit of researcher Cox Automotive. “The summer is going to be really tight on inventory and that should stall sales.”

Industrywide, inventory fell to 33 days’ supply at the end of May, the latest data available, according to Cox. That’s about half of what is considered healthy and down 44% from a year ago.

The slowing sales rate is still miles ahead of this time last year, when car factories were slowly ramping up after pandemic-induced factory shutdowns and many consumers were still sheltering in place. Cox estimates U.S. auto sales rose 53% in the second quarter compared to last year and were even slightly above the same period in 2019, long before COVID-19 hit.

There is a silver lining for carmakers: The combination of high demand and low supply is pushing prices to record levels. Researcher J.D. Power estimates the average price of a new model topped $40,000 in June for the first time, up almost 15% from last year. The most-sought-after SUVs and trucks are commanding prices thousands above the window sticker.

That has created “a strong earnings environment,” Adam Jonas, an analyst with Morgan Stanley, wrote in a June 24 note to investors. “As the chip supply situation eases, we expect to see the inventory situation at U.S. dealers move from ‘unprecedented tightness’ to just ‘tight.’ ”

General Motors Co. said earlier this month it’s boosting output at two truck plants, with plans to beat its first-half forecast and hit the high end of its full-year target. And Ford’s CEO reversed his company’s downbeat financial forecast for the second quarter and now predicts results will be “significantly better” than last year.

CEO Jim Farley went from saying “many of our dealers have run out of product” in May to marveling this month that rising prices on Ford models are “pretty breathtaking.”

Deals on wheels are virtually nonexistent. This month, the average incentive per vehicle fell 43% to $2,492, the second-stingiest discount that J.D. Power ever recorded for June.

With an eye to those fatter profits, Farley sees lean inventory becoming “the new normal.”

“In 2019, we were up to 100 days’ supply with the F-Series,” Farley said at a Deutsche Bank conference this month. “We’re not going to do that again.”

Ohio dealer Ricart sure hopes automakers don’t keep inventories too tight. When he looks out at his lot, he sees more black asphalt than shiny new models.

“We’ve got about a third of the cars on the lot, or even less” than last year, Ricart said. “That’s just a huge issue.”