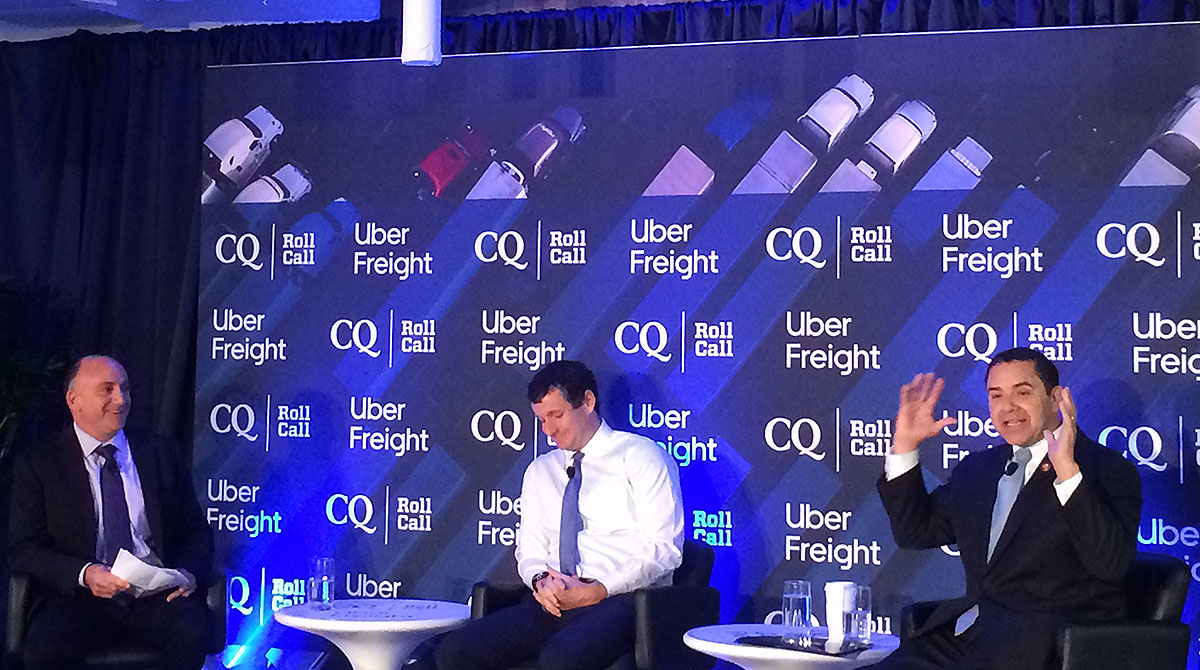 WASHINGTON — Federal policymakers seek to reassure truckers about their future in the labor force as they acknowledge the need to adapt to a new landscape amid advancements in automation. Such advancements are prompting debates throughout the freight industry, they say.

“Will there be debates? Of course there’ll be debates. Certain groups are going to say, ‘Hey, you’re taking my job away and, darn it, I’m not going to let a robot handle that. And you’re not going to take a job from me.’ So, yeah, you’re going to have certain debates for years to go,” said Rep. Henry Cuellar (D-Texas), a member of the Appropriations Committee.

“You’re going to have the force of technology meet certain other forces that are certainly going to create a lot of debate,” he later stressed.

He went on, “In the end, it means that we’re going to have to be constantly upgrading our skill sets.”

The two members of Congress participated on a panel hosted by CQ Roll Call on Nov. 19.

Policymakers as well as myriad stakeholders have emphasized technology’s potential for improving truckers’ work schedules, which may help to address the industry’s shortage of drivers. On the issue of driver shortage, Cuellar insisted that incentives need to improve to draw a new generation into the industry.

“There is a shortage,” Cuellar explained. “I think one of the ways we can help them is making sure there is more efficiency in the movement of goods to address that; and the trucking industry plays such an important role to the U.S. economy.”

The two lawmakers also acknowledged a need to prioritize safety nationally and across the northern and southern borders while growing the workforce in the coming years.

In our third episode of RoadSigns, we ask: How does AI change trucking's back office? Hear a snippet from host Seth Clevenger, above, and get the full program by going to RoadSigns.TTNews.com.

“This is about ensuring that we solve the problem by encouraging more [drivers] to get into the industry, not by watering down regulatory or watering down safety requirements on Canada, on the United States, or Mexico, to solve this problem. This is about solving it while still holding a very high bar to safety,” Hollingsworth noted.

American Trucking Associations determined the driver shortage industrywide in 2018 was about 60,800, and that shortage is projected to increase to 160,000 in about a decade.

“The driver shortage is really a problem for the entire supply chain as 71.4% of all freight tonnage is moved on the nation’s highways,” ATA indicated in a report published this year. “Additionally, as volumes increase, the existing driver pool is only more strained.”

According to the report, over the next 10 years, the industry will have to hire about 1.1 million new drivers, or about an average of nearly 110,000 annually.

Additionally, ATA has highlighted the role of drivers when it comes to safety and efficiency, and the group stresses they will continue to have a place in the industry as the technological landscape evolves.

As lawmakers proceed to carve a path forward on legislating new transportation technologies, congressional panels have yet to advance policy that would facilitate the development and access of autonomous vehicles. Such policy guidelines are expected to be attached to comprehensive highway legislation that House transportation leaders intend to consider next year.