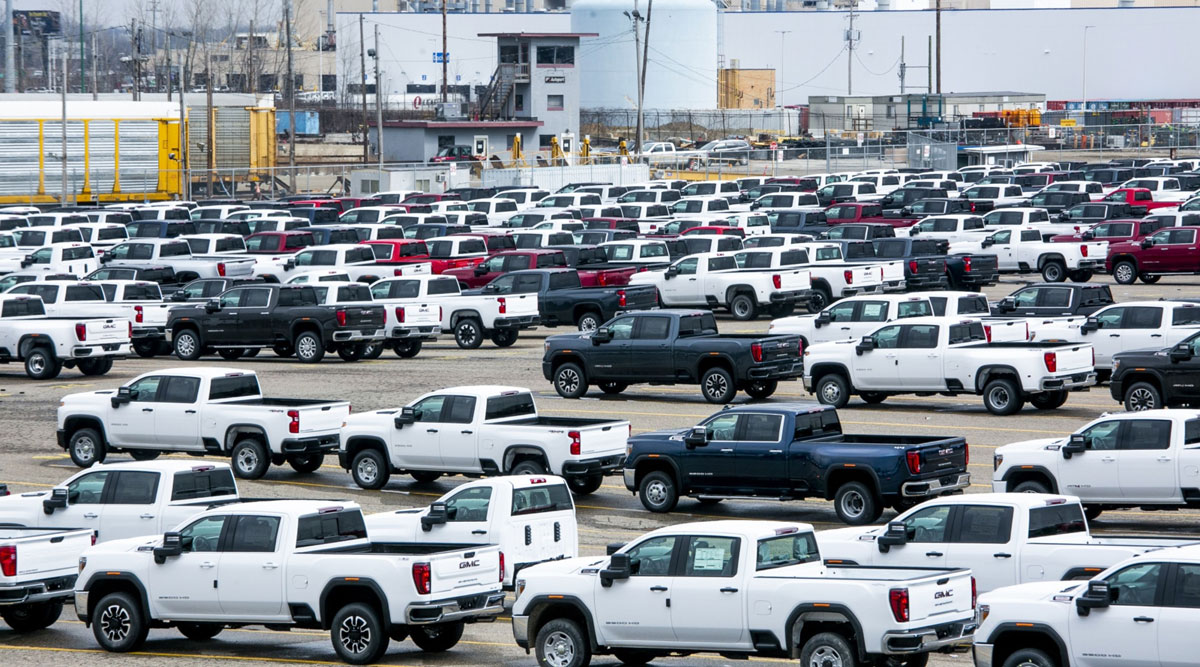 A year that started off well for the U.S. auto market, with only a subtle downshift expected following years of strong demand, is suddenly shaping up to be a disaster.

The coronavirus pandemic has disturbed the virtuous blend of lofty consumer confidence and low interest rates that buoyed sales in January, February and even early March. Analysts are now all over the map for how low sales will go, with virtually no one expecting a speedy recovery.

“The whole world is turned upside down right now,” said Jessica Caldwell, executive director of insights for market researcher Edmunds, which sees the industry’s annualized selling rate slowing to 11.9 million in March. That would be the worst reading since the 2011 tsunami that hit Japan and interrupted shipments of cars and components for months.

April is normally one of the better months of the year for auto sales, with the spring selling season bringing car buyers out of their winter torpor. But 2020 will be different. Ford Motor Co. is expected to report the biggest first-quarter decline among the traditional Detroit-area automakers, followed by Fiat Chrysler Automobiles NV and General Motors Co. Numbers being released April 1 are expected to be far weaker in the following months. 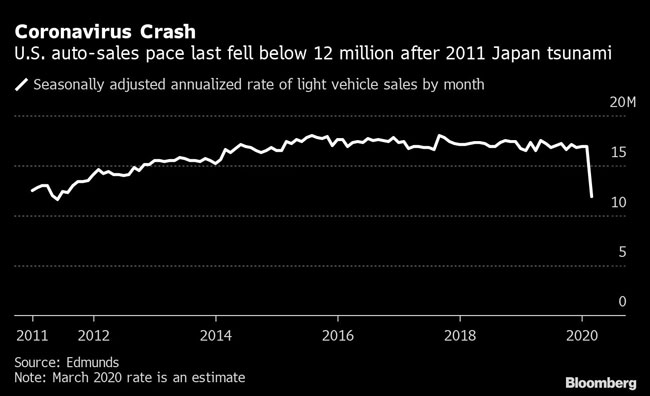 “There are basically no U.S. auto sales right now,” Adam Jonas, an analyst with Morgan Stanley, wrote in a March 27 report. “Investors have fully embraced the reality that the U.S. auto industry may be shut down for one or two full months. We’re now being asked to run scenarios of six-month or nine-month shutdowns.”

The pessimism intensified over the weekend when U.S. President Donald Trump extended to April 30 the social-distancing guidelines aimed at containing the virus. Auto factory shutdowns that began in the middle of March are now going to last longer than companies including Ford had hoped. With a global recession increasingly likely, fearful U.S. consumers remain stuck in their homes with little or no desire to make a major purchase like a new automobile.

“We just don’t know when and how this ends, and that’s the biggest problem right now,” said Jeff Schuster, senior vice president of forecasting for research LMC Automotive. “All of this uncertainty creates a lot of angst and that has been spreading really like a wildfire through the industry.”

Schuster predicts the annualized selling rate will decelerate next month to between 9 million and 10 million vehicles. That’s lower than the 10.4 million autos sold in 2009, when both GM and Chrysler filed for bankruptcy.

JPMorgan Chase & Co. analysts are even more downbeat, predicting the pace next month will be between 6 million and 7 million. That would be below the 9.1 million level reached in February 2009, the worst monthly rate in decades.

The quarterly data many major automakers report April 1 will partially reflect the heady and outdated optimism from the first 10 weeks of the year. That has been overtaken by the coronavirus crisis that has deflated stock prices, fractured the economy and sapped the confidence of previously resilient American consumers.

The University of Michigan’s closely watched measure of consumer sentiment tumbled in March to its lowest level since the 2008 financial crisis and is on pace to have its largest two-month decline ever. The data indicate the economy is already in recession.

Even the U.S. government’s $2 trillion stimulus package and automakers’ generous incentives will do little to change the mood, said Richard Curtain, University of Michigan economist and director of surveys.

“Mitigating the negative impacts on health and finances may curb rising pessimism, but it will not produce optimism,” Curtain said. “Rebuilding confidence first requires a clear and unmistakable turning point in the fight against the virus as well as continued financial support to avoid a deeper and extended recession.”

The February collapse of vehicle sales in China, where the pandemic originated, could be an indication of the extent of damage ahead for the U.S. Deliveries in the world’s second-largest economy plummeted 79% last month and have recovered slowly.

The virus has already sickened more than 160,000 Americans and killed more than 3,000. Anthony Fauci, director of the National Institute of Allergy and Infectious Diseases, said March 29 that millions of Americans could become infected and 100,000 to 200,000 could die.

Analysts are hoping for a fourth-quarter bounceback once the number of people laid low by the coronavirus diminishes. But without a vaccine to prevent further outbreaks, an economic recovery is far from assured.

“Do we get any lift in the fourth quarter? That’s really what’s in question,” LMC’s Schuster said. “There is the potential that we have waves of infection, where you essentially shut things down for a short period to try to manage outbreaks. If we’re dealing with that next year, obviously we don’t get the rebound.”