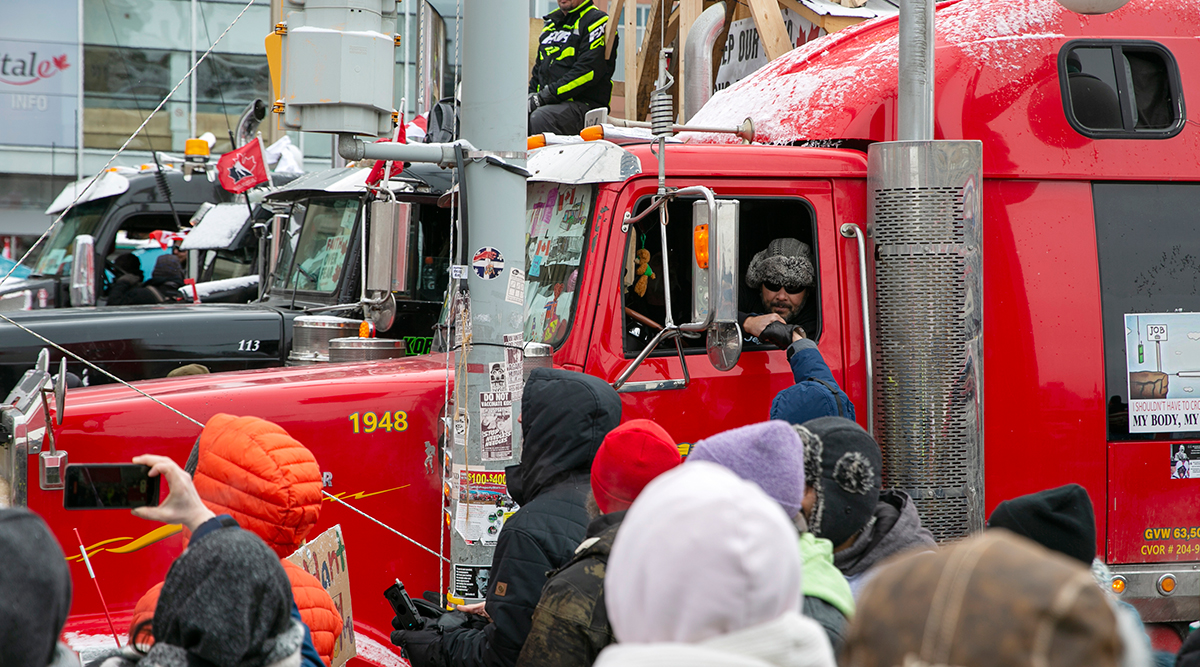 Prime Minister Justin Trudeau is invoking emergency powers across all of Canada to quell protests by demonstrators who have paralyzed Ottawa and blocked border crossings in anger over the country’s COVID-19 restrictions.

Trucks and other vehicles in Coutts, Alberta, began rolling out Feb. 15, ending a blockade that paralyzed a U.S. border crossing into Montana for more than two weeks. Bloomberg News reported demonstrators at a border crossing between Manitoba and North Dakota are also preparing to leave in unison Feb. 16 with a police escort, said truck driver Jake Klassen.

And Ottawa’s police chief, Peter Sloly, resigned Feb. 15 amid criticism of his department's inaction against the trucker protests that have paralyzed Canada's capital.

"Like other residents in Ottawa, I have watched in disbelief as this carnival chaos has been allowed to continue,” Diane Deans, chair of the Ottawa Police Services Board, said in announcing Sloly's departure. She added that the protesters had turned downtown into a street party with big screens, hot tubs and an outdoor gym.

Sloly said in a statement that he did everything possible to keep the city safe, calling it an “unprecedented and unforeseeable crisis.”

Ottawa’s police board said 360 vehicles remained involved in the blockade in the city’s core, down from a high of roughly 4,000. A command center was set up so that the Royal Canadian Mounted Police and the Ontario Provincial Police could assume command over the situation, apparently relegating Ottawa police to a secondary role.

Interim Ottawa Police Chief Steve Bell said he believes authorities have reached a turning point: “I believe we now have the resources and partners to put a safe end to this occupation."

His government instead threatened to tow away vehicles to keep essential services running; freeze truckers' personal and corporate bank accounts; and take further action to strike at their livelihoods and the sources of their financial support.

“Consider yourselves warned,” Deputy Prime Minister Chrystia Freeland said. “If your truck is used in these blockades, your corporate accounts will be frozen. The insurance on your vehicle will be suspended. Send your rigs home.” 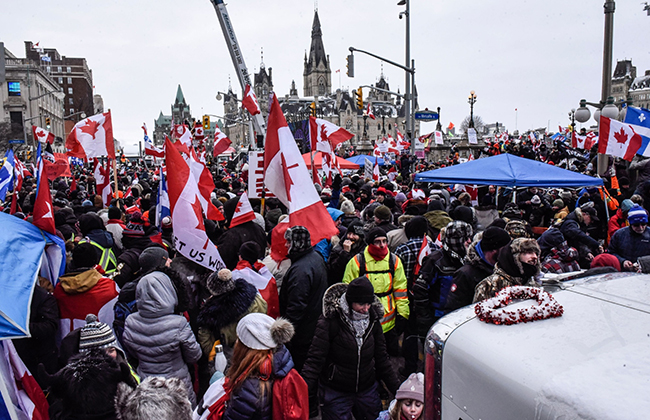 Protesters during a demonstration near Parliament Hill in Ottawa on Feb. 12. (Stephanie Keith/Bloomberg News)

Freeland, who is also the finance minister, said the government will also target crowd-funding sites that are being used to support the blockades.

Trudeau gave assurances the emergency measures “will be time-limited, geographically targeted, as well as reasonable and proportionate to the threats they are meant to address."

“These blockades are illegal, and if you are still participating the time to go home is now,” the prime minister declared after meeting virtually with leaders of the country’s provinces.

For more than two weeks, hundreds and sometimes thousands of protesters in trucks and other vehicles have clogged the streets of Ottawa, the capital, protesting vaccine mandates for truckers and other COVID-19 precautions and condemning Trudeau’s Liberal government.

Protesters during a demonstration near Parliament Hill in Ottawa Feb. 12. (Stephanie Keith/Bloomberg News)

Members of the self-styled Freedom Convoy have blockaded various U.S.-Canadian border crossings, though the busiest and most important — the Ambassador Bridge connecting Windsor, Ontario, to Detroit — was reopened on Feb. 13 after police arrested the last of the demonstrators and broke the nearly weeklong siege that had disrupted auto production in both countries.

American Trucking Associations spoke out against protests that disrupt the flow of commerce.

“ATA strongly opposes any protest activities that disrupt public safety and compromise the economic and national security of the United States,” ATA President Chris Spear said in a statement. “We held serious concerns about the unintended impact a vaccine mandate would have on our nation’s supply chain and ongoing COVID response efforts, which is why ATA challenged the OSHA rule all the way to the Supreme Court — where we prevailed.”

Spear added, “We’ll continue to advocate on behalf of our members for policies that enable the industry to keep the supply chain moving, and we’ll do so in ways that do not hinder the safe and timely flow of commerce that everybody depends on.”

The Conservative premier of Ontario, which is Canada’s most populous province and includes Ottawa and Windsor, indicated support for the emergency action before the meeting with Trudeau.

But one of the protest organizers in Ottawa vowed not to back down in the face of pressure from the government.

“There are no threats that will frighten us. We will hold the line,” Tamara Lich said.

And at least three other provincial leaders — from Quebec, Alberta and Saskatchewan — warned Trudeau against taking emergency action, some of them cautioning that such a move could inflame an already dangerous situation.

“At this point it would not help the social climate. There is a lot of pressure and I think we have to be careful,” said Quebec Premier François Legault. “It wouldn’t help for the polarization.” 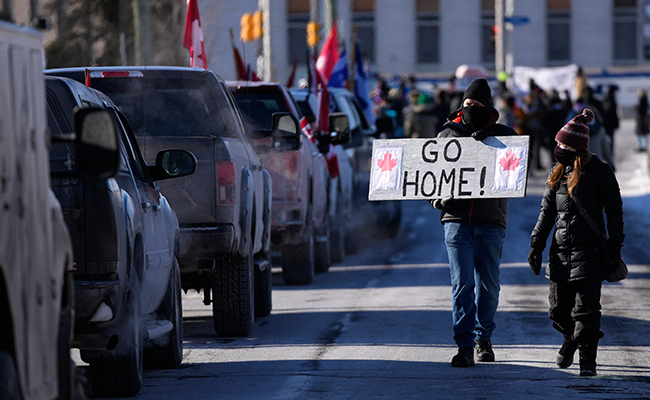 An Ottawa resident holds a sign towards protesters trying to stop vehicles from driving in a convoy en route to Parliament Hill in Ottawa Feb. 13. (Justin Tang/The Canadian Press via Associated Press)


In other developments, the Royal Canadian Mounted Police said they arrested 11 people at the blockaded border crossing at Coutts, Alberta, opposite Montana, after learning of a cache of guns and ammunition.

Police said a small group within the protest was said to have a “willingness to use force against the police if any attempts were made to disrupt the blockade.” Authorities seized 13 long guns, handguns, sets of body armor, a machete, a large quantity of ammunition and high-capacity magazines.

Alberta Premier Jason Kenney also said protesters in a tractor and a heavy-duty truck tried to ram a police vehicle at Coutts on Feb. 13 and fled.

“This is extremely concerning,” he said. “There is, at least in that case, a small cell of people who wanted to take this in a very dangerous and dark direction.”

The demonstrations have inspired similar convoys in France, New Zealand and the Netherlands. U.S. authorities have said that truck convoys may be in the works in the United States.

Also Feb. 14, Ontario Premier Doug Ford announced that on March 1, Canada’s most populous province will lift its requirement that people show proof of vaccination to get into restaurants, gyms and sporting events. The surge of cases caused by the omicron variant has crested in Canada.

“Let me very clear: We are moving in this direction because it is safe to do so. Today’s announcement is not because of what’s happening in Ottawa or Windsor but despite it,” Ford said.

The province will also remove its 50% capacity limit on restaurants on Feb. 17, four days earlier than planned. Ford gave no timetable for dropping the requirement that people wear masks in public places.

Ford said he would support Trudeau’s government if it proposed further measures to quell the protests.

“We need law and order. Our country is at risk now. It’s not just happening here in Ottawa, but it’s happening in Alberta and British Columbia,” Ford said. “We won’t accept it.”

Police in Windsor arrested 25 to 30 protesters and towed several vehicles Feb. 13 near the Ambassador Bridge. The span, which carries 25% of all trade between the two countries, reopened to traffic late Feb. 13.

The interruption in the flow of goods forced General Motors, Ford, Toyota and other automakers to close plants or curtail production on both sides of the border.

The siege in Ottawa, about 470 miles away, has infuriated residents fed up with government inaction. They have complained of being harassed and intimidated by the protesters who have parked their rigs on the streets.

Gillies reported from Toronto. Associated Press writers Ted Shaffrey in Ottawa and Gene Johnson in Seattle contributed to this report.