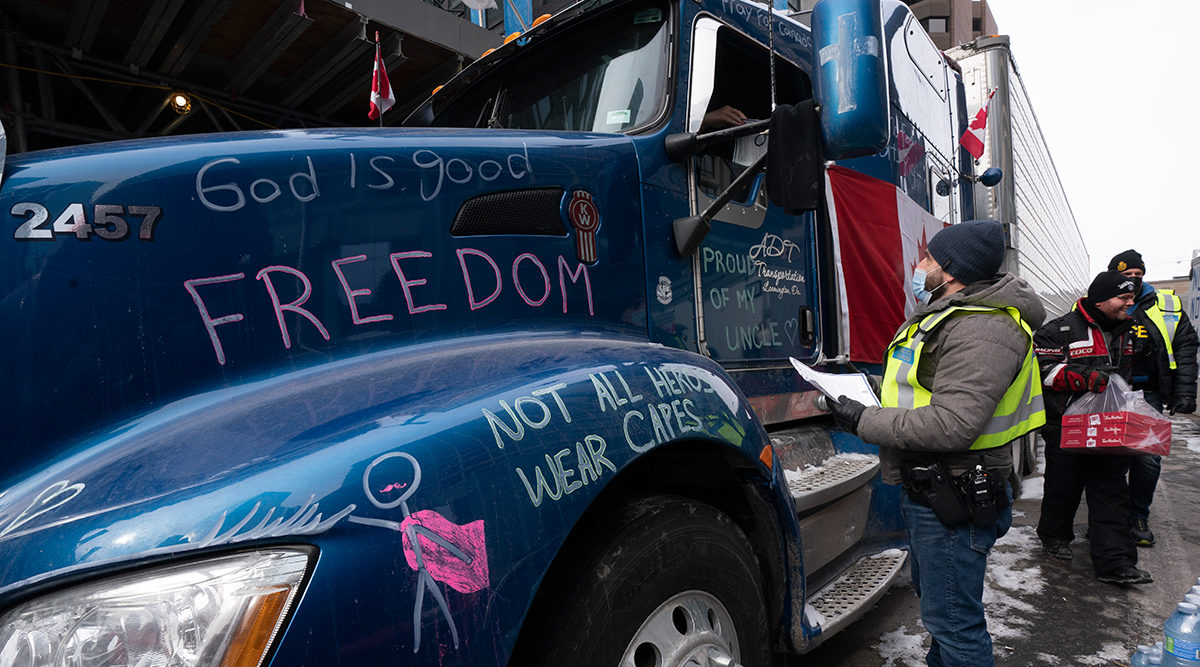 Ottawa police speak with a driver as they distribute notices to protesters Feb. 16. (Adrian Wyld /The Canadian Press via Associated Press)

The big rigs parked outside Parliament represented the movement’s last stronghold after demonstrators abandoned their sole remaining truck blockade along the U.S. border.

With that, all border crossings were open for the first time in more than two weeks of unrest, centering attention on the capital, where drivers defiantly ripped up warnings telling them to go home.

Authorities in yellow “police liaison” vests went from rig to rig, knocking on the doors of the trucks parked outside Parliament, to inform truckers they also could lose their licenses and see their vehicles seized under Canada’s Emergencies Act.

Some truckers ripped up the order, and one protester shouted, “I will never go home!” At least one trucker pulled away from Parliament Hill.

There was no immediate word from police on when or if they might move in to clear the hundreds of trucks by force. But protest leaders braced for action on Feb. 16.

“If it means that I need to go to prison, if I need to be fined in order to allow freedom to be restored in this country — millions of people have given far more for their freedom,” said David Paisley, who traveled to Ottawa with a friend who is a truck driver.

“Well, so far they are just a piece of paper,” she said of the printed warnings. “We will see what happens. I don’t think they have the manpower to do it.” 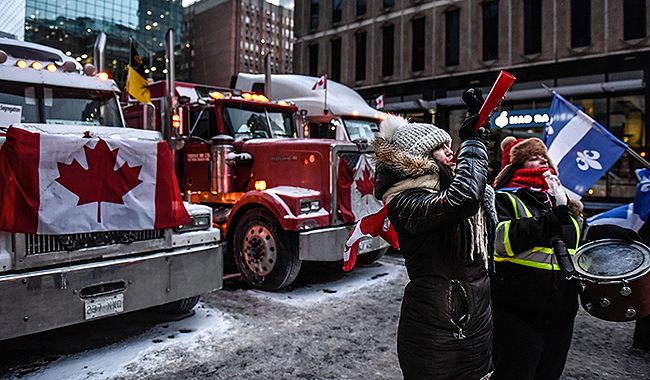 Protesters during a demonstration near Parliament Hill in Ottawa on Feb. 12. (Stephanie Keith/Bloomberg News)

The warnings came just days after Prime Minister Justin Trudeau invoked the emergency law, which gave authorities power to ban the blockades and tow away the trucks.

Since late January, protesters in trucks and other vehicles have jammed the streets of the capital and obstructed border crossings, decrying vaccine mandates for truckers and other COVID-19 precautions and condemning Trudeau’s Liberal government.

On Feb. 16, protesters who had stopped traffic and trade for a week along the U.S. border at Emerson, Manitoba, opposite North Dakota, pulled away in tractors and trucks without any arrests.

Within hours, the crossing was fully open with no delays for commercial trucks, border officials said.

In Ottawa, the bumper-to-bumper demonstrations by the so-called Freedom Convoy have infuriated many residents, who have complained of being harassed and intimidated on the clogged streets.

Police in Ottawa were optimistic they could gain control in the coming days after Trudeau invoked the Emergencies Act on Feb. 14.

Over the past weeks, authorities have hesitated to move against the protesters, citing in some cases a lack of manpower and fears of violence.

Trudeau’s decision came amid growing frustration with government inaction. Ottawa Police Chief Peter Sloly lost his job this week after he failed to move decisively against the demonstrators.

You must leave the area now. Anyone blocking streets, or assisting others in the blocking streets, is committing a criminal offence, and you may be arrested. You must immediately cease further unlawful activity, or you will face charges. pic.twitter.com/ESCTBbA8DZ

Interim Ottawa Police Chief Steve Bell said Feb. 15 he believes authorities have reached a turning point: “I believe we now have the resources and partners to put a safe end to this occupation.”

But protesters in the capital appeared to be entrenched. On Feb. 15, Ottawa officials said 360 vehicles remained involved in the blockade in the city’s core, down from a high of roughly 4,000.

“They don’t want to give this up because this is their last stand, their last main hub,” said Michael Kempa, a criminology professor at the University of Ottawa.

Even after the warnings, a few protesters roasted a pig on the street in front of Parliament, and a child played with blocks in a small playground area on a road lined with trucks.

Police in the capital appeared to be following the playbook that authorities used over the weekend to break the blockade at the Ambassador Bridge connecting Windsor, Ontario, to Detroit. Police there handed out leaflets informing protesters they risked arrest. After many demonstrators left and the protest had dwindled, police moved in and made dozens of arrests.